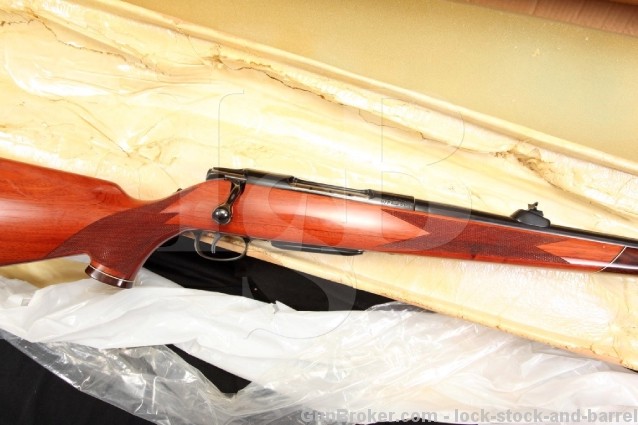 LSB#: 130534BL45
Make: J.P. Sauer & Sohn (Colt)
Model: R8005 Grand African
Serial Number: CR17208
Year of Manufacture: circa 1980
Caliber: .458 Winchester Magnum
Action Type: Bolt Action with Detachable Magazine and Non-Rotating Bolt
Markings: The right side of the frame is marked “Made In W. Germany / by J. P. Sauer & Sohn”, while the left side is marked “COLT SAUER / GRAND AFRICAN” and “CR17208”. The Colt and Sauer logos are on the left side of the frame. The right side of the chamber has the German Nitro Proof Mark and the left side is marked “.458 Win. Mag.” The top of the barrel is marked “COLT’S PT. F.A. MFG. CO. HARTFORD, CT, U.S.A.” The follower of the magazine is marked “COLT SAUER / Cal. 458 win. Mag.”
Barrel Length: 24″
Sights / Optics: The front sight is a white beaded blade, set in a dovetail on a matted ramp and under a hood. The rear sight is a notch, adjustable for elevation by sliding on the ramped pedestal and adjustable for windage by drifting in a second dovetail. There are four factory set screws in the top of the receiver, to be removed and used for the mounting of optics.
Stock Configuration & Condition: The stock is a Monte Carlo configuration, hand-checkered piece of a reddish hard wood, showing walnut grip cap and forearm cap with white line spacer and a left side cheek piece. A ventilated rubber Colt Sauer butt pad is installed and fit nearly perfectly to the butt. The pad is in Excellent condition though a bit stiff. We can find no imperfection or wear in the wood and the previous owner states this to be an unfired rifle. The LOP measures 13 ¼” from the front of the trigger to the back of the pad. The stock rates in about LNIB overall condition.
Type of Finish: Blue
Finish Originality: Factory Original
Bore Condition: The bore is bright and the rifling is sharp. There is no erosion and this rifle is purported to be unfired, which is completely believable.
Overall Condition: This rifle retains about 99.8% of its metal finish. The balance of the finish shows wear only on the bolt from one or two chamber checks. This rifle is in the box, purported to be unfired and we would believe it. The screw heads are sharp. The markings are clear and as applied at the factory, though the caliber stampings are strange looking . . . The markings almost look filled and may be filled with the original packing grease. We have not wanted to try any solvent near this rifle to remove what we believe to be dried grease in these markings. Overall, this rifle rates in about Excellent and LNIB condition.
Mechanics: The action functions correctly. We have not fired this rifle.
Box, Paperwork & Accessories: The original hinged cardboard shipping box is included. The cardboard has seen some rubs and moisture, though it remains very sturdy and complete. There is tape at several places on the exterior, though the end label matches and is entirely visible. The foam inserts are deteriorating, but present. The box and packing materials rate in about Very Good condition.
Our Assessment: From the NRA Museum: These high-quality rifles were manufactured in Germany by the firm of J. P. Sauer & Son.
Colt Arms has designed and produced rifles for military and civilian use since 1835. Introduced in 1971, the Colt-Sauer was a top-of-the-line model for civilian use. It was manufactured in Germany by J. P. Sauer & Son, an old-time arms maker. This combination of American and German talents focused only on a small segment of world market potential.
The fine design of this rifle almost assured its continued, though relatively small, sales. Colt made many types of guns and still attempted to maintain a high standard of quality. However, the Sauer rifle could not compete economically and was therefore discontinued in 1985. In the realm of modern arms, Colt has tended to remain traditional. This attribute can become a disadvantage if public tastes change too rapidly.
These very unique rifles with non-rotating bolts and many other design and engineering features quickly became the favorites of game hunters on all continents. This rifle is About-New and in the condition worthy of the quality with which it was made. You will find almost no higher quality rifle designed in modern years and you will find no nicer Grand African than this one.
CA Legal or CA Private Party Transferable: This rifle can be transferred/sold in California.