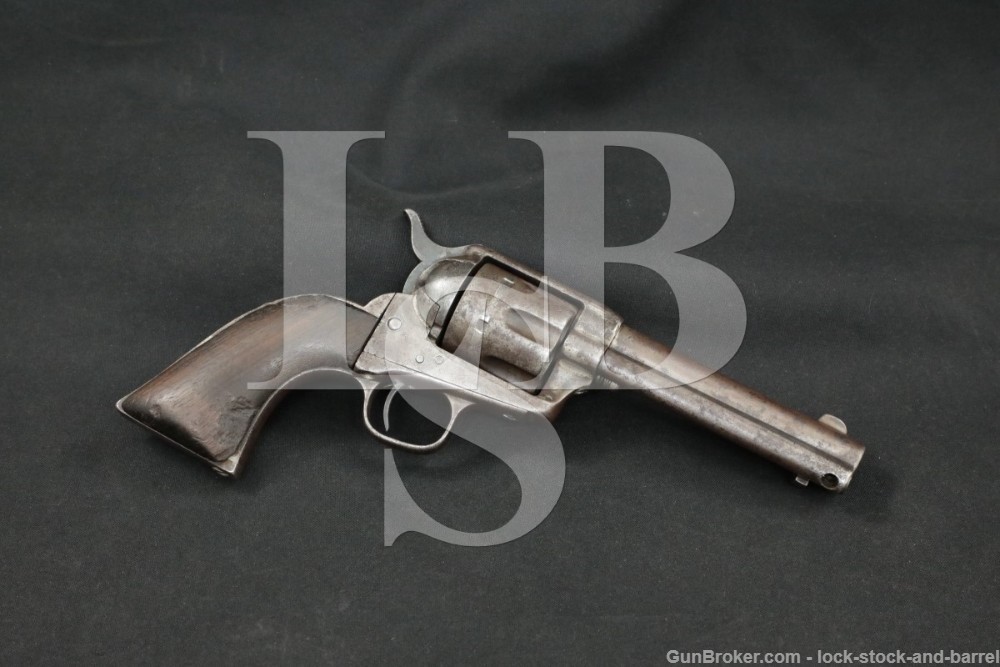 Barrel Length: The barrel has been cut to approximately 4 5/8″.

Type of Finish: There are remnants of both blue and nickel finish (see Our Assessment)

Finish Originality: Refinished. The cylinder and likely the ejector housing have been replaced. This revolver falls into the serial range for the “Virginia Buy-Backs” which were issued to the Virginia Militia, and the majority were immediately sold to Hermann Boker who refinished the guns in nickel for re-sale.

Overall Condition: This revolver retains about 5% of its current metal finish. There is nickel finish remaining on the right of the frame next to the hammer and in front of the cylinder. The top and bottom of the ejector housing have blue finish showing, possibly indicating a replacement part. Other surfaces have mostly gone to a light patina with scattered surface oxidation and erosion. There are scattered nicks, scuffs and scratches. There are tool marks around most screw heads with more notable tool marks at the front of the frame on each side at the barrel. The firing pin bushing is missing from the inside of the recoil shield. There is wear on the rear of the cylinder between each chamber as from dry-firing with the cylinder mis-indexed. The markings range from clear to worn and incomplete, with most of the patent date marking worn off. The screw heads range from tool marked with strong slots to disfigured with unuseable slots, and some screws do not appear original to the gun. Overall, this revolver is in about Fair-plus condition as Antique.

Mechanics: The hammer does not properly catch at half-cock. The cylinder does not properly lock on any chamber. When at full-cock, the hammer has excessive over-travel. The firing pin bushing is missing from the inside of the recoil shield. The trigger is crisp. The cylinder has a removable bushing, but it is seized in place, we were not able to remove it. We did not fire this revolver. As with all used firearms, a thorough cleaning may be necessary to meet your maintenance standards.

Our Assessment: Colt’s Single Action Army is, perhaps more than any other, an iconic American pistol. It was the U.S. issue sidearm for the last two decades of the 19th century, used by pioneers, outlaws and lawmen across the expanding nation, and captivated audiences on the silver screen and television (and still does, today). In addition to service with the U.S. Cavalry, it was also purchased for and issued to several state militias under the Militia Act of 1808, which allowed the US Government to purchase items and supplies for State Militias. In 1874, the state of Virginia was struggling economically and took advantage of the Act, rather blatantly. Orders were placed for 769 and then for 1,538 Colt revolvers, apparently with the express intention of then re-selling them. The majority of these were indeed sold to a Hermann Boker who would proceed to re-finish many in nickel for re-sale, ironically sold back to Colt’s. This caused quite the stir as the Militia Act was designed to supply State Militias, certainly not to provide materiel to be re-sold for funds. This revolver falls right in the middle of known “Buy Back” guns, with both 13197 and 13200 listed in Kopec and Fenn’s “Cavalry & Artillery Revolvers”. The gun has since been modified with the barrel cut to 4 5/8″ and the cylinder replaced. Despite the modifications and mechanical issues, this revolver’s likely connection to “The Virginia Fracas” makes it a desirable gun for collectors. Please see our photos and good luck!