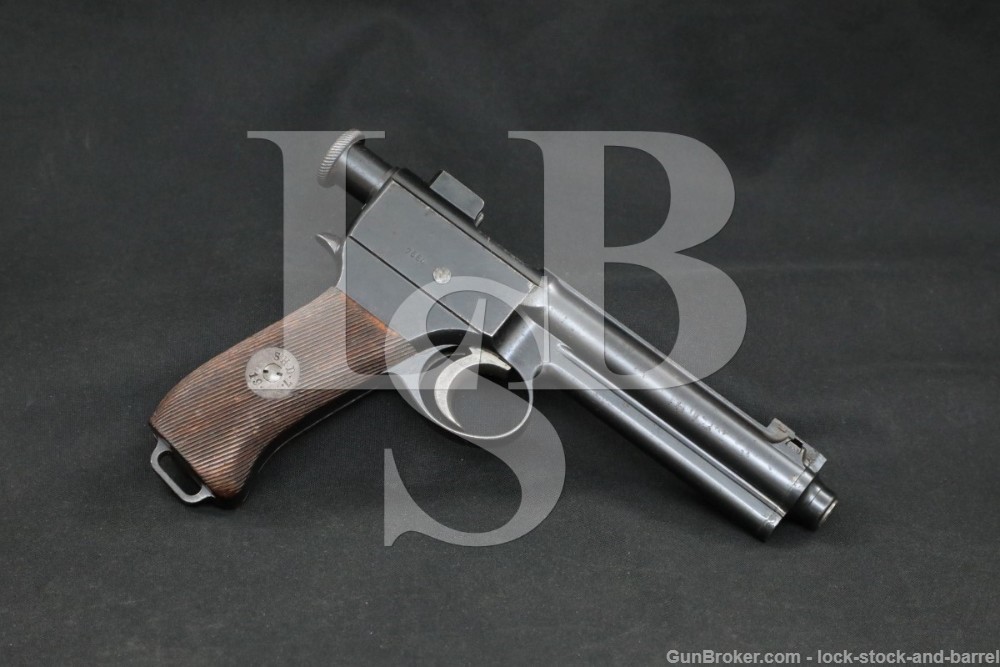 Sights / Optics: The front sight is a blade dovetailed into the front of the barrel jacket. The rear sight is a “V”-notch integral to the frame’s stripper-clip guide.

Stock Configuration & Condition: The grips are two-piece serrated wood panels. The grips have light handling wear with some scattered nicks, dings, scuffs and scratches. The serrations are generally well defined. There are no cracks. Overall, the grips are in about Very Good condition.

Bore Condition: The bore is gray with sharp rifling. There is light erosion scattered through the bore.

Overall Condition: This handgun retains about 80% of its metal finish. The balance is mostly in scattered minor surface oxidation and some light erosion, most notable on the sides of the barrel jacket. There are some scattered minor nicks and scratches. The action shows operational wear. The screw head is tool marked with a strong slot. The markings are clear. Overall, this pistol is in about Very Good condition.

Our Assessment: Adopted in 1907 by the Austro-Hungarian Cavalry, the Roth-Steyr M1907 was actually designed by Karel Krnka, an employee of Georg Roth. The pistol has a very interesting mechanism, operating via short-recoil and locking via a rotating barrel. The bolt telescopes over the breech of the barrel, all contained within a barrel jacket integral to the frame. The pistol was specially designed to have the striker mostly cocked by depressing the trigger at the behest of the Austrian Cavalry, so that it would not be fired accidentally around horses. This pre-dates Glock’s “safe-action” design by a few decades. This example was made in 1909 and was apparently issued to a Heavy Howitzer division. If the pistol was still in service in 1915, it would have been on the Italian front with the 7th Schwere Haubitzendivision which was supporting VII Corps under General der Kavallerie Erzherzog Joseph. This would have put it in place for as many as four of the Twelve Battles of the Isonzo, and the heavy howitzers would certainly have seen some use in those engagements. This pistol survived the Great War better than most, and will make a great addition to a WWI small arms collection. Please see our photos and good luck!