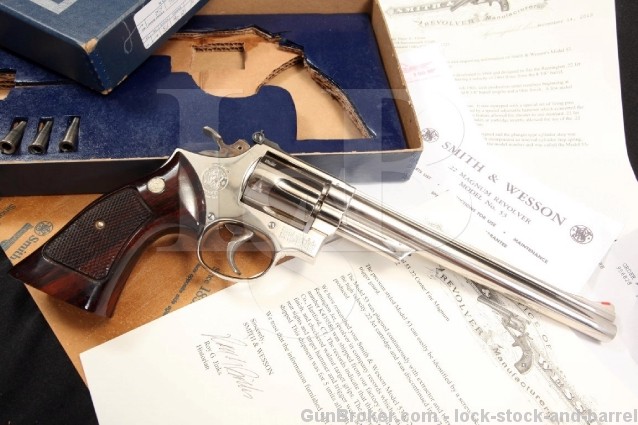 SOLD FOR: $1,950.00
LSB#: 130729PG01
Make: Smith & Wesson
Model: Model 53, the .22 Centerfire Magnum (aka: the Jet)
Serial Number: K439586
Year of Manufacture: 1961
Caliber: .22 Remington Jet and .22 Long Rifle
Action Type: Single and Double Action Revolver with Swing-Out Cylinder
Markings: The left side of the barrel is marked “SMITH & WESSON” and the right side of the barrel is marked “22 MAGNUM”. There is a “1” inside the ejector shroud, and the yoke cut is marked “7 / K439586 / MOD. 53” and the yoke is marked “86190”, “7”, “3” and “A”. The rear face of the cylinder, under the extractor star is marked “586”. The underside of the extractor star is marked “439586” as is the underside of the grip frame. The left side of the grip frame is marked “7”, “86190”, “3” and a partially struck “3” while the right side of the grip frame is marked with an “M” and a “3”. The right sideplate has a large S&W logo and the frame’s right side has the four line Marcas Registradas address.
Barrel Length: 8 3/8”
Sights / Optics: The front sight is a pinned, ramped serrated blade with a red insert set on a serrated solid rib. There is a white outline S&W micrometer click adjustable rear sight.
Stock Configuration & Condition: The grips are checkered target stocks with silver colored S&W medallions and extractor relief cut. The grips have light handling marks, but no notable chips, cracks or scratches. The grips may have had a clear finish applied to them since leaving the factory. The grips rate in about Excellent overall condition.
Type of Finish: Nickel
Finish Originality: Professionally Applied
Bore Condition: The bore is bright and the rifling is sharp. There is no erosion in the bore.
Overall Condition: This handgun retains about 99.9% of its current metal finish. There is the hint of the start of a cylinder drag line and perhaps some very light handling marks. The hammer and trigger are nicely case colored. The screw heads are sharp. The markings are clear, particularly for a gun that has been nickeled. Overall, this handgun rates in about Excellent condition.
Mechanics: The single and double actions function correctly. This is a Square Butt K Frame, 4 Screw Revolver with a pinned barrel. There is a .500” wide checkered Target hammer and a serrated .500” wide target trigger. This gun has two frame mounted firing pins, one for centerfire cartridges and the other for rimfire cartridges. The hammer has a serrated thumbpiece that rotates such that one of two different strikers hits the appropriate firing pin. We did not fire this handgun.
Box, Paperwork & Accessories: This revolver is provided with an S&W two piece blue cardboard box with blue metal reinforced corners. The box has an end label that describes this revolver as a Model 53 with Nickel finish, 8 3/8” barrel, target stocks, target hammer, target trigger, red ramp front sight, white outline rear sight and the correct serial number. The box is slightly frayed at the unfinished edges and is otherwise in Fine shape. Inside the box is a blue cardboard insert that has been cut out for the 8 3/8” barred revolver, an auxiliary .22 Long Rifle cylinder that is NOT provided, and 6 inserts that convert the .22 Remington Jet chambers to accept .22 Long Rifle. The interior and 6 inserts are all in Fine condition. There is what appears to be a copy of the owner’s manual and paperwork showing the consignor’s request to have S&W refinish the revolver in nickel. There is also a two page S&W factory letter signed by Roy G. Jinks dated prior to the “refinish in nickel” request stating the revolver left the factory in blue with a 6” barrel and target stocks. It further states that: “The 8 3/8 inch barrel with a red ramp, the white outline rear sights and the target hammer and trigger were added after this early revolver was originally shipped.”
Our Assessment: The S&W Model 53 was introduced in March of 1961 and this revolver was originally shipped from the factory on June 5, 1961-making this a very early production revolver. It appears that the revolver was redone at the S&W factory within the last twelve months and it certainly looks to be of a quality that is only likely to be achieved there. The .22 Remington Jet cartridge requires that the ammunition and the chambers of this revolver be scrupulously clean and dry to avoid functioning and extraction problems. It is definitely more tailored to the handloading enthusiast as Remington discontinued the ammunition around 1990. This gun is in excellent condition and appears to have had all of its changes performed at the factory. It is therefore just as suitable for the collector as for the shooter.