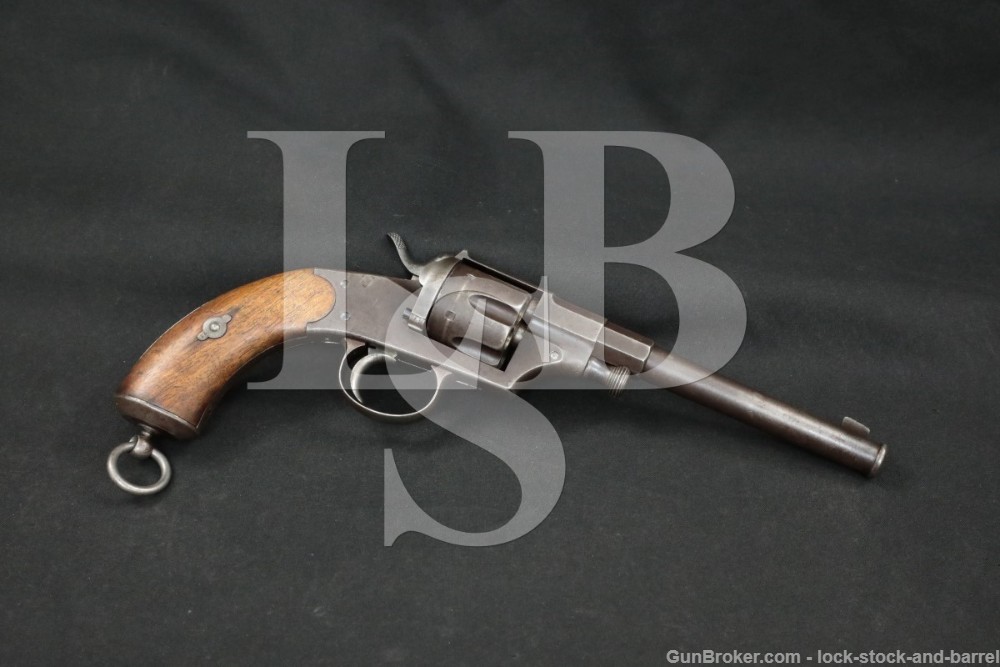 Sights / Optics: The front sight is a blade integral to the barrel. The rear sight is a “V” notch in the topstrap.

Stock Configuration & Condition: The grips are two-piece smooth walnut. The grips have a few light nicks, scuffs and scratches. The right panel has thin cracks at each end of the escutcheon. The wood is generally slightly shy to the metal. Overall, the grips are in about Very Good condition as refinished Antique.

Bore Condition: The bore is gray, the rifling is sharp where not interrupted by erosion. There is scattered light erosion and some patches of more moderate erosion and pitting in the bore.

Overall Condition: This handgun retains about 25% of its metal finish. The remaining finish is scattered and blends well with the areas which have gone to a light patina. There are some areas worn to white including the sides of the barrel toward the front. There are wear lines around the cylinder pin retainer on the left of the frame and on the butt cap around the lanyard ring. There is some scattered light surface oxidation and minor erosion, including erosion on the left edge of the mainspring. There are tool marks at the screw heads. The action shows operational wear, including a turn-line on the cylinder and wear in the safety’s detent slot. The screw heads are tool marked with deep, strong slots. The markings are generally clear, some are worn, but visible. Overall, this handgun rates in about Very Good-Fine condition as Antique.

Mechanics: The hand spring is missing or broken. The cylinder only advances properly on cocking the hammer when the pistol is oriented down. When held level or pointed up, the hand does not properly advance the cylinder. The trigger is heavy, but crisp. We did not fire this handgun. As with all used firearms, a thorough cleaning may be necessary to meet your maintenance requirements.

Our Assessment: Following the consolidation and creation of the German Empire, Germany was faced with integrating several different militaries of the German states into one German Army. Part of this involved standardizing sidearms, and the M1879 was adopted to serve as the Reichsrevolver, the revolver which would be the sidearm of all German Empire forces. Officially replaced in 1908 by the Luger, the M1879 would continue to see use all the way through the Great War. This example would make a great collector piece just for its condition and matching numbered parts (except the lanyard ring), but it is also unit marked. Not just any unit, this revolver’s markings indicate that it was issued to the 10th Hussars Regiment, 1st Company. Most famous for their exploits in the Napoleonic wars, the “Magdeburg” Hussar regiment in 1882, when this revolver was made, was headed by Gerd con Rundstedt, father of the famous Field Marshal of WWII. In 1900, portions of the 10th Hussars were sent to China during the Boxer Rebellion and some were sent to German South-West Africa when unrest broke out in 1903. In 1914, the regiment was expanded and took part in the invasion of Belgium and capture of Brussels, the Race to the Sea, and was on the Western front for all of 1915. This revolver’s rich history will make it a fine addition to a collection of late 19th/early 20th century military arms. Please see our photos and Good luck!