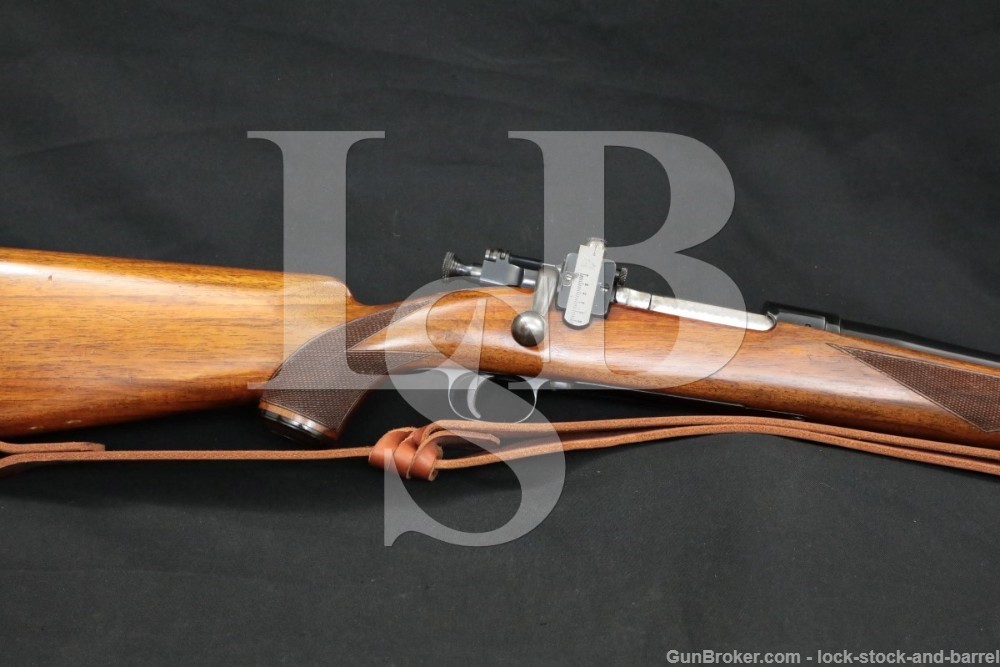 Sights / Optics: The front sight is a beaded blade atop a ramped base and set under a removable protective hood. The base is finely serrated to reduce glare. The rear sight is a fully adjustable Lyman No. 48 aperture peep sight. The right side of the sight is marked “0 25 50 75 100 125” and the top is marked “0”. There are also hash marks on the top and right.

Stock Configuration & Condition: The walnut stock has hand checkering on the grip & forend, a pistol grip, hard rubber grip cap, fluted comb, Schnabel tip forend, two sling loops, and a checkered metal buttplate. The wood shows draglines and compression marks throughout. There are a few little dings and marks through the finish. Some of the checkering has been scraped or compressed but is mainly strong. The LOP measures 13 3/4 inches from the front of the trigger to the back of the buttplate. The top of the buttplate shows scrapes and surface erosion. The stock rates in about Very Good to Fine overall condition.

Finish Originality: Original to the Date of Customization

Bore Condition: The bore is bright and the rifling is sharp. There is no erosion. The bore shows an M.E. of 0.5.

Overall Condition: This rifle retains about 95% of its metal finish. Much of the metal was refinished when the rifle was customized. Imperfections on the metal, such as the original serial number, show through the new finish. The metal shows some light scuffs with a few little scratches and scrapes on the bottom metal. There are some spots of light thinning going to a faint patina. The screw heads show some use. The markings are deep. Overall, this rifle rates in about to Fine condition.

Our Assessment: This comes from the collection of Rick Hacker, noted gun writer, NRA Field Editor and winner of the John T, Amber Literary Award. After the World War I Armistice, vast numbers of surplus 1903 Springfield rifles were released into the civilian market at enticingly affordable prices. This gave birth to a new generation of early 20 th century gunsmiths who began creating customized bolt action sporting rifles out of what had been America’s primary battle rifle. One of the more obscure craftsmen from this period was Reginald F. Sedgley, a Philadelphia gunsmith who formed R.F. Sedgley, Inc. in 1916, a company that remained under his ownership until his death in 1938. Sedgley was known for buying pre-existing actions and rebarreling and restocking them. However, his most prolific claim to fame was purchasing Springfield actions, grinding off the markings, annealing and re-heat treating them, then rebarreling them with Winchester barrels, which he stamped “R.F. SEDGLEY. INC. PHILA, PA. U.S.A.,” along with his circled “S” Sedgley proofmark. Sedgley rifles were stocked with attractive European walnut. A typical Sedgley sporter was chambered in .30-06, had a 26-inch barrel, a distinctive hooded, ramp-based front sight, a Lyman No. 48 rear sight, and sold for $65. A Schnabel fore-end, checkered steel buttplate and hard rubber grip cap were standard, although fancier-grained rifles with a cheekpiece could be special ordered for $150. Sedgley rifles have unceremoniously been called “the poor man’s Griffin & Howe,” but this does an injustice to an excellent custom hunting rifle of the period. Chambered in .30-06 and with the correct features, it remains in great condition for a pre-war custom rifle and is sure to be tack driver at 150 yards. With the growing awareness of early 20 th century gun makers such as Sedgley, values of these customized Springfield sporters may well increase. Please see our photos and good luck!