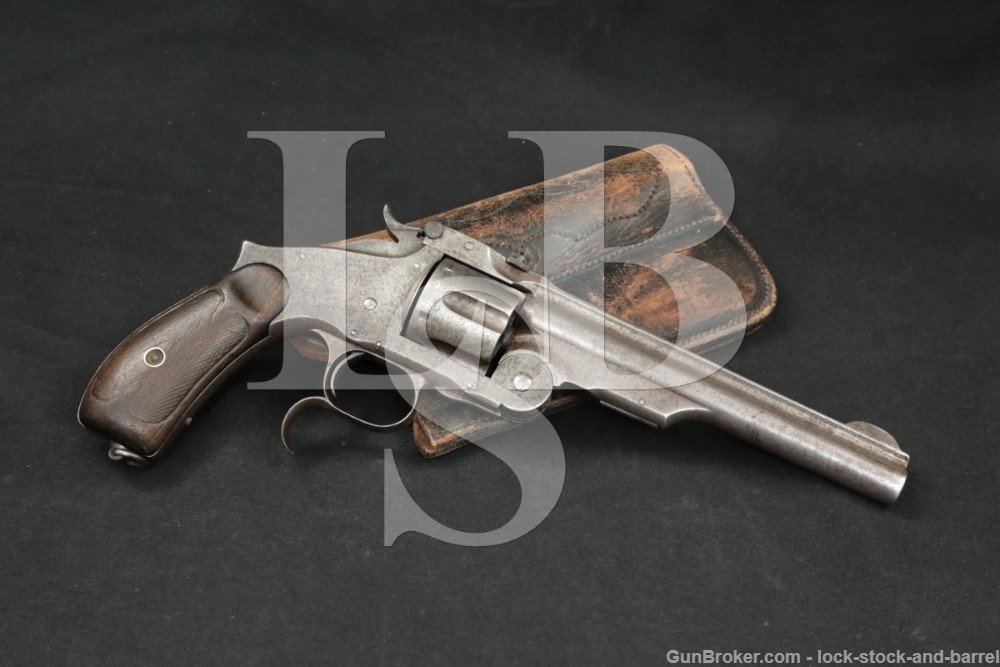 Markings: The barrel’s top rib is marked “LUDWIG LOEWE & Co. WAFFEN – & MUNITIONS – FABRIK BERLIN No 1312” and with a circled “C” inspection mark. The left of the frame has a circled “C” below the cylinder. The rear face of the cylinder and the butt of the grip frame are each marked “1312”.

Stock Configuration & Condition: The grips are two-piece checkered walnut with smooth diamonds around the grip screw escutcheons. The grips have moderate handling wear with scattered nicks, scuffs and scratches. The checkering ranges from worn, but visible to worn smooth. There are no chips or cracks. Overall, the grips are in about Very Good-plus condition as Antique.

Type of Finish: The finish was Blued.

Finish Originality: No finish remains, but we see no signs of a new finish having been applied.

Overall Condition: This revolver retains about 0% of its metal finish. The metal surfaces have worn to white, showing scattered light surface oxidation and minor erosion. The cylinder has turn wear. There are some scattered light nicks, scuffs and scratches. The screw heads range from sharp to tool marked with strong slots. The markings are clear. Overall, this revolver is in about Good condition as Antique (see Mechanics).

Mechanics: The cylinder over-rotates on four consecutive chambers, the timing is good on the other two. Otherwise, the action functions correctly. The extractor functions properly. The barrel latch lock-up has a small amount of play. The cylinder locks up with little play and the trigger pull is crisp. We did not fire this revolver. As with all used firearms, a thorough cleaning may be required to meet your maintenance standards.

Box, Paperwork & Accessories: This revolver comes with a brown leather holster which appears to be for a different model. The holster shows scattered wear and surface loss with mostly intact stitching, there is some missing decorative stitching on the right side. Overall, the holster is in about Good condition.

Our Assessment: When Smith & Wesson began making centerfire top break revolvers in 1870, they named the large framed .44 Model “No. 3”. This was followed by the .38 Model No. 2 in 1876 and the .32 Model No. 1 ½ 1878, based on frame sizes, not date of manufacture. All were made first in single action, and later double action models were added. The single action versions of the Model 3 were made in four distinct groups: Americans, Russians, Schofields and New Models. The Russian models are distinguished by having a round butt grip frame with extreme knuckle, a barrel latch mounted on the top strap vs. on the frame, and were in .44 caliber with 6 ½ or 7” barrels. The Russian Empire didn’t follow through with payments, nearly bankrupting Smith & Wesson, and would then reverse-engineer the revolver’s design. They then contracted with the German firm of Ludwig Loewe to produce their revolvers until eventually starting domestic production at the Tula arsenal. After Russia began producing the revolvers on their own, Loewe would make some commercial guns, such as this one, though they are less common than the Russian military revolvers. Ludwig Loewe was a big deal in German arms, going on to found DWM, having a controlling interest in Mauser, and employing both Hugo Borchardt and Georg Luger. This revolver’s connection to Smith & Wesson, the Russian Empire and one of Germany’s largest firearms manufacturing companies makes it a great piece for collectors. Please see our photos and good luck!