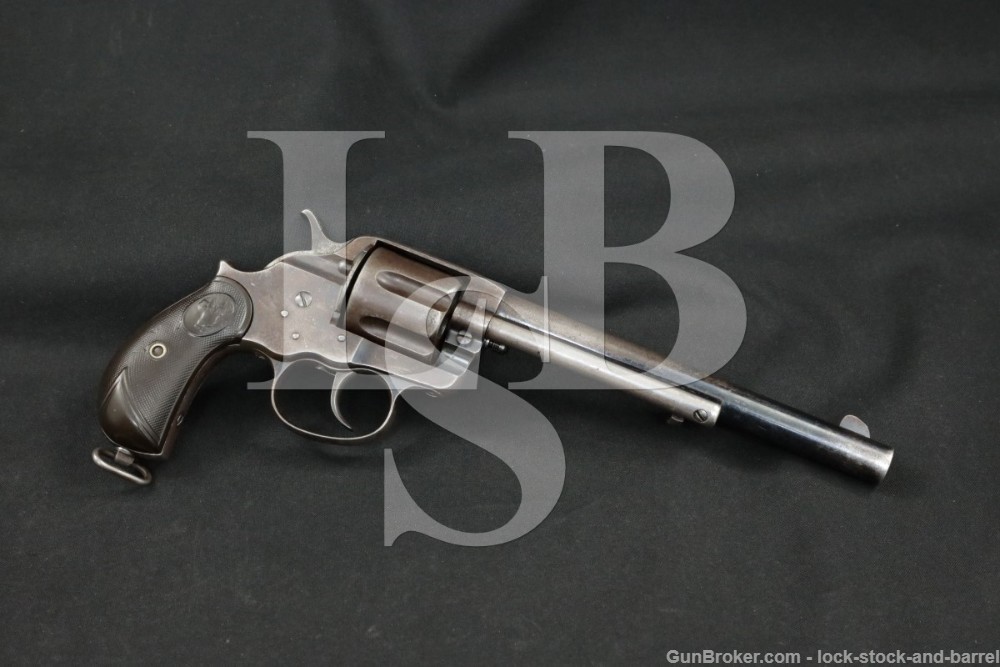 Sights / Optics: The rear sight is a “V” notch in the top strap. The front sight is a tapered blade fixed to the barrel.

Stock Configuration & Condition: The grips are checkered hard rubber with smooth borders, wedge-shaped smooth base and rampant colt in oval at the top of each panel. Originally black, the grips have gone to a brown color. The grips have scattered nicks, scuffs and scratches. The checkering shows handling wear with a few patches worn smooth, but generally well defined. There is some wear on the rampant Colts, more notable on the right panel. There are no chips or cracks. Overall, the grips are in about Very Good-Fine condition as Antique.

Bore Condition: The bore is gray with well defined rifling. There is light-moderate erosion and some light pitting scattered through the bore. There are a couple of notable nicks inside the crown on the right.

Overall Condition: This revolver retains about 50% of its metal finish. Strongest finish is on the left of the frame, the front half of the barrel on the top, right and bottom and in protected areas such as the top of the trigger guard, the top and bottom of the ejector housing, and the front front of the frame around the cylinder pin. Most other surfaces have worn to white or gone to a light patina. There are scattered nicks, scuffs and scratches with a cluster of more notable tool marks on the left-rear of the barrel. The screw heads range from sharp to disfigured with useable slots. The markings are clear. Overall, this revolver is in about Good-Very Good condition as Antique.

Mechanics: The action does not function correctly. When operated both single and double action, the cylinder does not always advance properly, frequently rotating backward when the trigger is released far enough to not properly rotate to the next trigger when the hand engages the cylinder. The double action trigger is heavy, but smooth, the single action is crisp. The cylinder locks up on each chamber with light play. We have not fired this revolver. As with all used firearms, a thorough cleaning may be necessary to meet your maintenance standards.

Our Assessment: The Colt DA Frontier Revolver, Model of 1878 was made until 1905, when swing-out cylinder double-action revolvers started to push loading gate revolvers out of the market. About 51,210 of these revolvers were made, with about 41,000 produced prior to 1899. This model had the same sharp knuckle at the top of the backstrap used on the Model 1877 “Lightning” but has a flat loading gate instead of the SAA style rounded loading gate. Otherwise, it still loosely resembled the SAA revolver with a side loading gate cylinder, and remained in production after the Model 1889 was produced with its swing-out cylinder. This example was made in 1891 and chambered for the classic .45 Colt cartridge. It will need some work before it will function properly, but with its original finish and serial-matching parts, it would be well worth the effort to add this revolver to a Colt collection. Please see our photos and good luck!