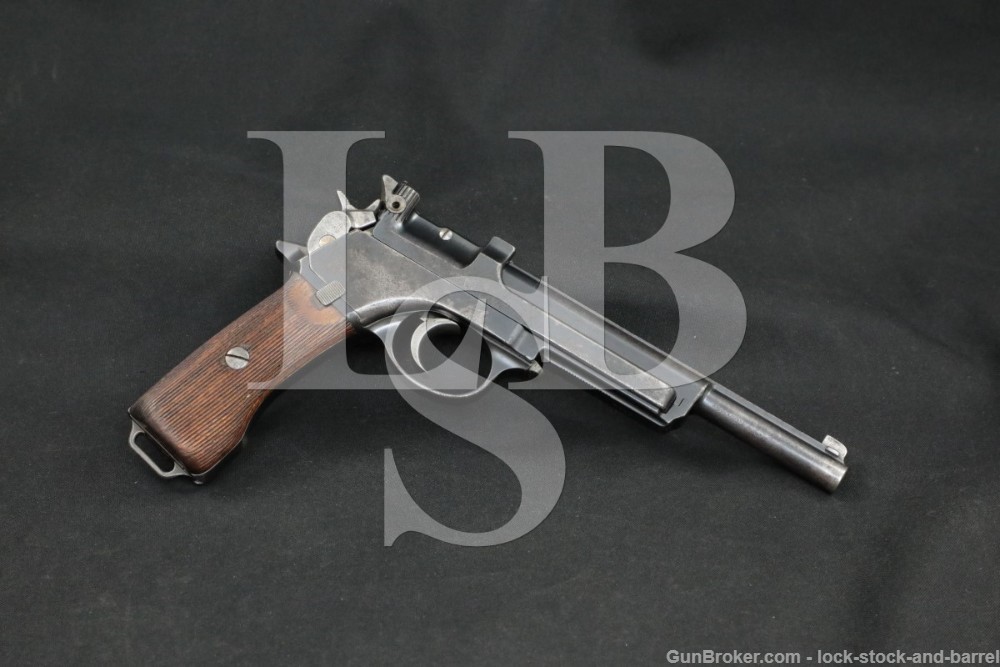 Stock Configuration & Condition: The grips are two-piece serrated wood panels. The grips have light handling wear with a few scattered light marks and tool marks around the screws. There are no chips or cracks. Overall, the grips are in about Very Good-plus condition.

Bore Condition: The bore is dark gray. The rifling is worn, but mostly visible. There is light-moderate erosion and pitting scattered through the bore.

Overall Condition: This handgun retains about 75% of its metal finish. The finish is thinning at all edges. The balance is mostly in scattered minor surface oxidation and light erosion, with finish wear on the right of the action cover behind the trigger. There are some scattered minor nicks and scratches. The action shows operational wear. The screw heads are tool marked with strong slots. The markings are clear. Overall, this pistol is in about Good-Very Good condition and would easily rate Very Good but for the erosion in the bore.

Our Assessment: The Mannlicher Model 1905 was the end of a long series of pistol designs by Ferdinand von Mannlicher, slightly larger than the earlier 1901 Model. It is a slightly delayed blowback pistol with an external hammer, single action, and fed from a 10-round internal magazine loaded with stripper clips. This example has all matching serialized parts, strong mechanics and is in great shape considering its age, though the bore shows erosion consistent with the corrosive primers which were commonly used in the early 20th century. Most of the sales of the 1905 were either commercial or part of a contract for Argentina who adopted the Modelo 1905 for their military. This example is a commercial model and, given its serial number, it is from quite late in production. This is a nice example of a fairly scarce pistol, and would be a great addition to a collection of early semi-automatic pistols. Please see our photos and good luck!