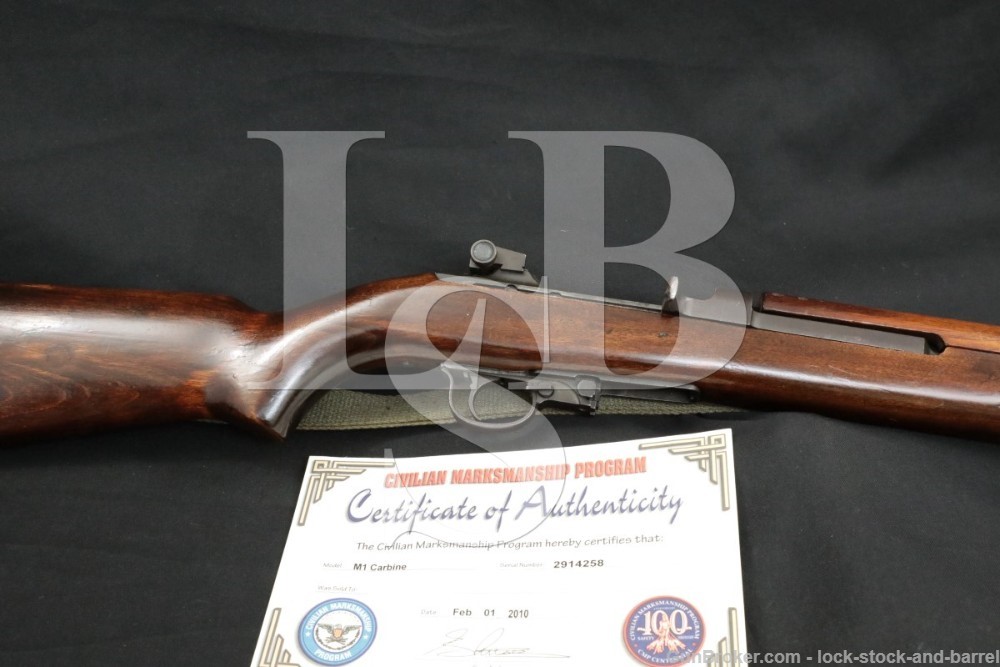 Stock Configuration & Condition: The stock had a pistol grip, Type III barrel band with sling loop & bayonet lug, sling well, sling pass through, and a metal buttplate. The buttplate shows light scrapes and spots of oxidation along the edge. The body of the stock has a semi gloss finish that shows runs of excess finish. Areas of the semi gloss finish have been dulled by scuffs. The wood shows several scrapes & scratches. Many have damaged small portions of the surface wood. Many of the marks have been finished over. There are small chips at the rear of the trigger guard. The LOP measures 13 ¼ inches from the front of the trigger to the back of the buttplate. The stock rates in about Very Good Plus overall condition as refinished.

Overall Condition: This rifle retains about 93% of its metal finish. The op rod has oxidation showing through the new finish. The metal shows scuffs & handling marks. The barrel also shows light scrapes. The receiver and trigger group show some thinning below the wood line. The right side of the receiver & bolt show thinning consistent with cycling. The markings on the metal are deep. The markings on the wood are faded. Overall, this rifle rates in about Very Good Plus condition.

Box, Paperwork & Accessories: There is No magazine. The rifle comes with a Civilian Marksmanship Program (CMP) Certificate of Authenticity. It is marked “M1 Carbine” and with the rifle’s serial number. The buyer’s name is covered with white-out. Overall it is in about Fine condition. The rifle has a green canvas sling attached. It shows oxidation & light scrapes on the metal as well as light discoloration on the canvas. Overall it is in about Very Good Plus to Fine condition.

Our Assessment: This Inland Division M1 Carbine was made back in 1943. After WWII it was Arsenal Rebuilt by Standard Products and is marked accordingly on the stock. This M1 Carbine was purchased through the Civilian Marksmanship Program (CMP) and comes with a CMP certificate. This is a good looking M1 Carbine that should keep you smiling at the range. All you need is a magazine and some ammo.