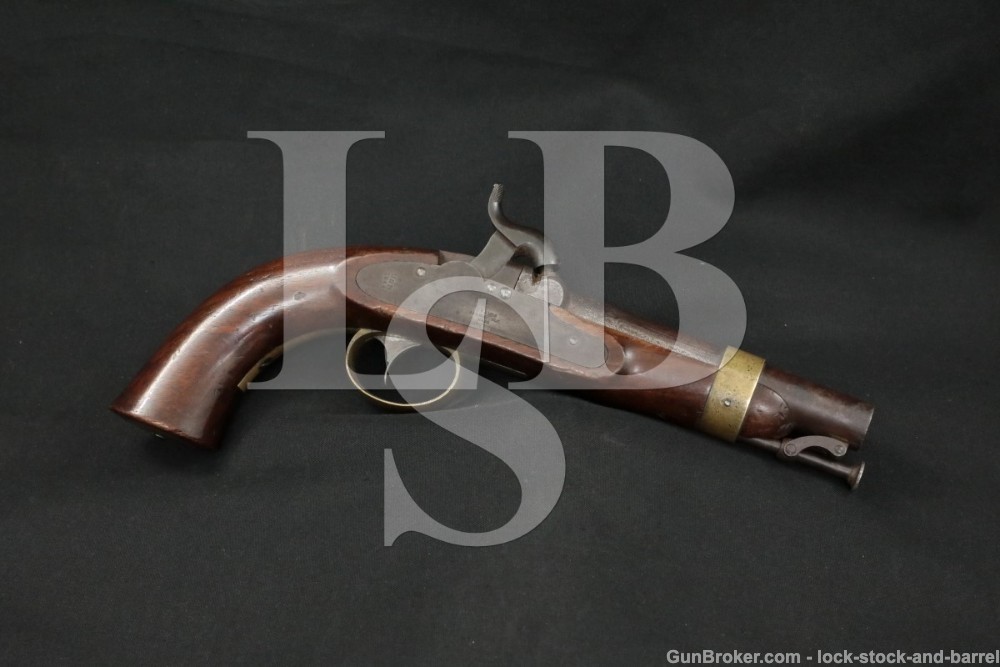 Sights / Optics:  This gun has no sights.

Stock Configuration & Condition:  The stock is one piece smooth wood with brass band, brass grip cap and a hole in the nose for the included, captured ramrod. The grip has scattered nicks and dings across the entire handle.  There are a few compression marks, most notably on the right side under the lock plate, left side opposite the lock plate, the left side of the handle near the trigger guard and the underside front of the stock towards the brass band and the right side of the handle.  There is a crack that runs under the mounting screw on the left.  The captive ramrod is intact and attached to the swivel, which functions properly.  Overall, the grip is in Very Good condition as Antique.

Bore Condition: The bore is dark. There is light-moderate erosion and pitting scattered through the bore

Overall Condition: This gun retains about 50% of its original metal finish. The balance of finish shows light handling and storage marks with oxidation on the barrel, hammer and trigger. The markings on the barrel and lock plate are clear. The Inspector Cartouches are faint but visible. The screw heads are sharp. Overall, this revolver rates in about Very Good-Fine condition as Antique.

Mechanics:  The action functions correctly.  The trigger has minor play side to side.  The hinge for the captured ramrod is slightly loose at the connection to the barrel. We did not fire this handgun. As with all used firearms, a thorough cleaning may be necessary to meet your maintenance requirements.

Our Assessment: This gun is a M1842 Naval Percussion Pistol manufactured in 1844 by the Ames Manufacturing Company of Springfield MA.  Designed by Nathan P. Ames, Jr., taking inspiration for the unique lock mechanism from the designs of English gunsmith Henry Nock, it improved upon the ease of use as it was less likely to snag on a serviceman’s uniform.

This pistol may have been present during two notable points in U.S. Naval history.  The first being the explosion on the deck of the U.S.S. Princeton; “The Peacemaker accident,” named for the larger of the two long guns onboard the Princeton.  The big gun had been hastily installed at the direction of Capt. Robert F. Stockton, exploding on its 4th firing of the day during a demonstration attended by President Tyler, who avoided injury.  The explosion resulted in the deaths of several men of national prominence, including the Secretary of State and Secretary of the Navy.

The other, more likely, possibility is that it was in use during the Mexican-American War.  The Navy’s involvement was instrumental in the swift capture of Mexico City in 1847, when Commodore David Conner and Commodore Mathew Perry landed 22,000 American troops in Vera Cruz, which was the largest amphibious operation until the Gallipoli campaign in World War I.

The condition of this gun belies the fact that it was manufactured for use in the U.S. Navy.  The gun’s condition and finish are still in excellent shape for a weapon that was likely exposed to the salt air and water that was routine for a naval serviceman.  Please see our photos and best of luck!