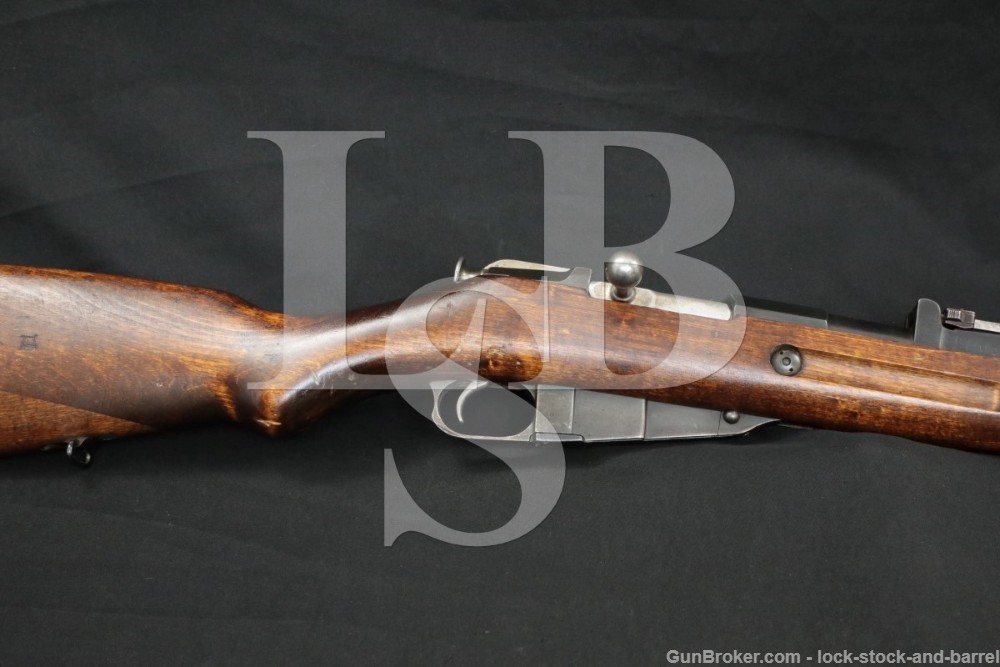 Make: Mosin Nagant by Sako of Finland. Built on a Russian Hex receiver.

Stock Configuration & Condition: The hardwood stock has a pistol grip, finger grooves, barrel band, nose cap with bayonet lug, hole for the included cleaning rod, 3 sling loops, through bolt, sling bar, sling well and a metal buttplate. The butt plate shows scratches, thinning and surface erosion. The wood shows scrapes, scratches and compression marks. Many have damaged small portions of the surface wood. Most of these marks have been oiled over. The LOP measures 13 ¾ inches from the front of the trigger to the back of the buttplate. The stock rates in about Very Good overall condition.

Bore Condition: The barrel is counterbored to about ½ an inch back from the muzzle. The grooves are dark and the rifling is deep. There is erosion in the grooves.

Overall Condition: This rifle retains about 96% of its metal finish. The receiver & magazine have small scratches and oxidation showing through the new Arsenal Rebuild finish. The metal shows scrapes & small scratches. The barrel shows areas of oxidation. The bottom of the magazine shows scratches, thinning and discoloration. The screw heads show heavy use. The markings are deep. Overall, this rifle rates in about Very Good condition.

Our Assessment: This Finnish Model M39 Mosin Nagant was built by Sako back in 1944. It looks good and has great markings on the metal. This M39 is built on a Hex receiver that was most likely manufactured by Russia. The Finns rebuilt and improved captured Russian Mosin Nagants that were left next to lots of dead Russian soldiers during the Winter War. This M39 will be ringing steel out at the range for a long time to come.