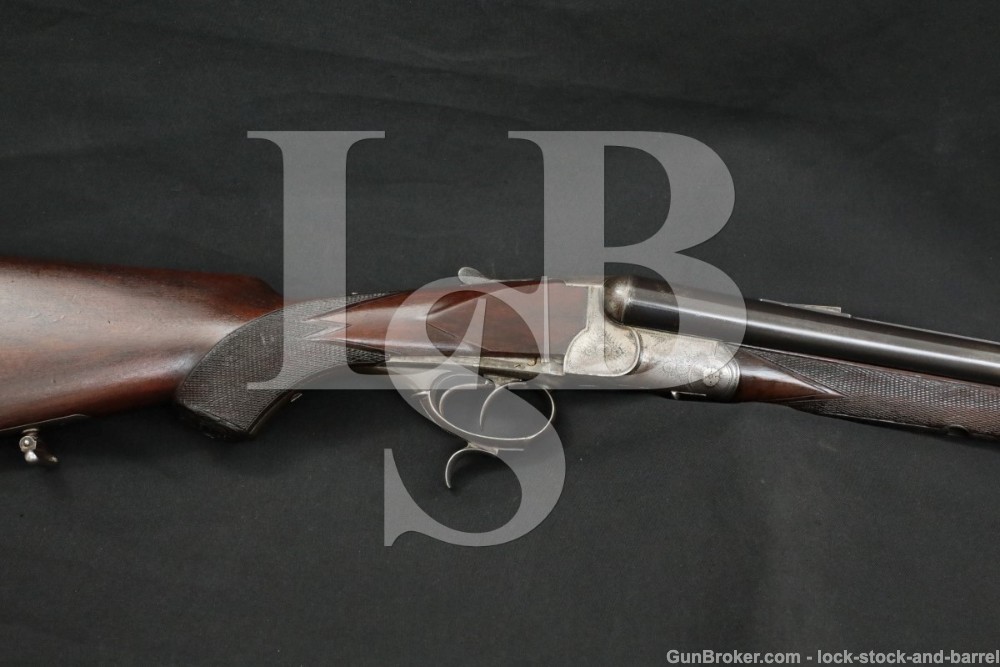 Caliber/Gauge: 16 Gauge, 2 9/16? Shells over a 7mm, rimmed, bottleneck cartridge rifled barrel. The barrel is marked “Cal. 7 / 46 1/2”, but we were not able to correlate this to a cartridge. You will want to cast the chamber to confirm prior to firing.

Markings: The top of the rib is marked “RHEIN. MET. u. MASCH. FBR. ABT. SOMMERDA GEWEHRFABRIK”. The rear of each shotgun barrel is marked “EHRHARDT / LAUF / SPEZIAL STAHL” around a diamond inside a circle. The bottom of each shotgun barrel is marked “29 Sch. PNA / 27g BI” outside the receiver. Under the forend, each shotgun barrel has circled “R” crowned “S” and “W” proofs, eagle proofs, “16” in circles, and “16/”. The bottom of the rifle barrel is marked “4477” in front of the forend lug, eagle proofs, crowned “U”, “F” and “G” proofs, “1 g  /  Tr.B.P / 9 gBI.” and “Cal. 7 / 46 1/2”. The left of the barrel lug, the inside of the forend iron and the left shoulder of the receiver are each marked “39573”. The left shoulder of the receiver is also marked “S. 657.”, the right has eagle and crowned “U” proof marks. The receiver has scroll and border engraving with motif continuing on the guard and forend iron assembly.

Sights / Optics: The front sight is a beaded blade in-line dovetailed to the front of the rib. There is a pop-up “U”-notch rear sight which is flipped up and down when the rifle-selector lever is activated/deactivated. When down, a wide “U”-notch pops up behind the rifle notch on the rib. The top of the rib has wavy serrations for glare reduction.

Stock Configuration & Condition: The stocks are two-piece checkered walnut with splinter forend, capped pistol grip, straight comb with cheekpiece, serrated horn buttplate, a trapdoor compartment in the belly for five cartridges and a sling swivel mounted in the belly (there is another swivel mounted to the bottom of the rifle barrel in front of the forend). The forend is inlet for an insert at the tip, but the insert is missing. There are some scattered nicks, scuffs and scratches. There is a long chip-loss at the bottom of the wrist on the right. The trapdoor assembly’s case color has muted some with some scattered discoloration from oxidation. The grip cap shows moderate wear. The LOP measures 13 5/8″ and 12 7/8″ from the fronts of the triggers to the back of the buttplate. The plate has scattered wear with well defined serrations. Drop at comb is approximately 1 3/8″, drop at heel 2 1/8″. The cast is about neutral. Overall, the stocks are in about Good condition.

Overall Condition: This drilling retains about 75% of its metal finish. The finish is thinning at all edges. The barrels have generally strong finish with some light wear on the sides above the forend, a few scattered minor nicks, scuffs and a few spots of minor surface oxidation. There is a small dent in the bottom of the right barrel about 3.5″ from the muzzle, visible in the bore. The receiver’s case color has mostly muted with strong color on the inside of the water table. The muted areas show minor surface oxidation. The tip of the Barrel Lever/Cocking Piece appears to have broken off. The horn guard has minor handling wear. The action shows light operational wear. The screw heads range from sharp to lightly tool marked with strong slots. The markings are clear. Overall, this drilling is in Good condition (see Mechanics).

Mechanics: During our function check, we could not get the front trigger to activate the rifle barrel without simultaneously activating the right shotgun barrel. This occurred with the selector in each position and whether or not the trigger was set. This should be addressed by a qualified gunsmith familiar with Drilling mechanisms prior to firing. Otherwise, the action functions correctly. There is a lever in the bottom of the trigger guard which is pushed forward to open the action and pulled to the rear to cock the strikers. The lever on the top tang selects between the rifle and shotgun barrels as well as switching which rear sight is up. The front trigger can be set by pushing it forward until it clicks. The barrels lock up with no play to the receiver. We have not fired this drilling. As with all used firearms, a thorough cleaning may be necessary to meet your maintenance standards.

Our Assessment: Combination guns have been a popular “do-all” gun for generations, with some still being produced today. The combination of a shotgun for fowl and a rifle for terrestrial game allows the hunter to become familiar with one gun for all their trips to the field. This example was produced by Rheinmetall, an East German gunmaker in Sommerda, its weapons makers a small division of a huge manufacturing company. It is chambered for 16 gauge shotgun shells and some form of 7mm rifle cartridge, though we were not able to determine the exact chambering. It seems to need some work on its mechanism as the front trigger appears to activate both the rifle and right shotgun barrels simultaneously, no matter where the selector lever is. Once that has been addressed, this would make a great piece for drilling or fine European firearms collectors. Please see our photos and good luck!