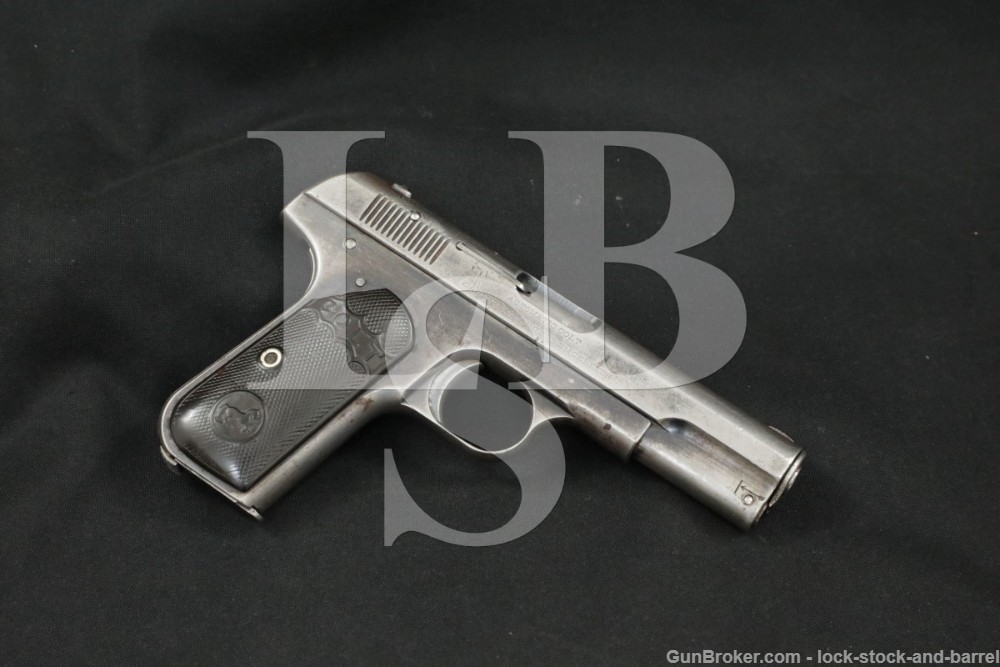 Stock Configuration & Condition: The grips are checkered black hard rubber Type I panels with “COLT” in a banner near the tops and a circled Rampant Colt logo in the bottom half of the grips. The grips have handling wear in the checkering, most notable at the bottom of the right panel. The left panel has a crack at the notch for the thumb-safety. The right panel has a chip-loss at the top-rear. Most checkering is well defined. The grips are in about Good overall condition.

Bore Condition: The bore is gray with well defined rifling. There is scattered light erosion in the bore. There are two bulges in the middle of the bore.

Overall Condition: This handgun retains about 20% of its metal finish. Finish remains mostly in protected areas such as on frame under the slide, on the slide in front of the dust cover, around the grips and safety. Three is more finish on the right frame flat than the left. There is some fire-blue still visible on the trigger and safety. Other surfaces have worn to white, showing scattered nicks, scuffs, scratches and some light surface oxidation and erosion. The barrel shows wear which appears to be from grinding down the bulges for clearance on the barrel bushing. The screw head is sharp. The pin heads are tool marked, but not peened. The markings are clear. Overall, this pistol is in about Fair-Good condition and would easily rate Good but for the bulges in the bore.

Mechanics: The safety is intended to be able to lock the slide back, but will only hold back the slide if the lever is held in place manually. If the lever is let go, the slide will fall. Otherwise, the action functions correctly. The slide has minor play to the frame. This pistol has a grip safety and a manual safety but does not have a magazine disconnect (this feature was added later in production). We did not fire this handgun. As with all firearms, a thorough cleaning may be necessary to meet your maintenance standards.

Box, Paperwork & Accessories: This pistol comes with one blued 8 round magazine with light-moderate operational wear, some light surface oxidation, intact feed lips and a strong spring, in about Good-Very Good condition.

Our Assessment: The Colt Model 1903 Pocket Hammerless is a semi-automatic pistol designed by John Browning, and was the 1st of the Colt concealed hammer models, followed by the M1908 in .380 ACP. Despite the title ‘Hammerless’, the M1903 and M1908 pistols do have a hammer, which is covered and hidden from view under the rear of the slide. This allowed the weapon to be carried in and withdrawn from a pocket quickly and smoothly without snagging. These pistols were popular civilian firearms for much of their life, and also served as United States General Officer pistols from the 1940s until their replacement by the M15 General Officers pistol in the 1970s. The Office of Strategic Services issued the Model 1903 to its officers during World War II and it was a popular back-up/off-duty model with police officers in the United States. Gangsters also favored this pistol, including Bonnie Parker and John Dillinger. This is a particularly early example of the Colt 1903 Type I Pocket Hammerless semi-auto made in 1903, the first year of production. This pistol is in about Fair-Good condition with 20% of its original finish remaining. The bore is gray with well defined rifling and a pair of bulges visible in the bore. This pistol will add to a collection of early Colt automatics with its early features such as barrel bushing, plunge-cut slide serrations, 4″ barrel, and flame-blued controls. If the collectors don’t pay enough attention, a replacement barrel should yield a fun shooter. Please see our photos and good luck!