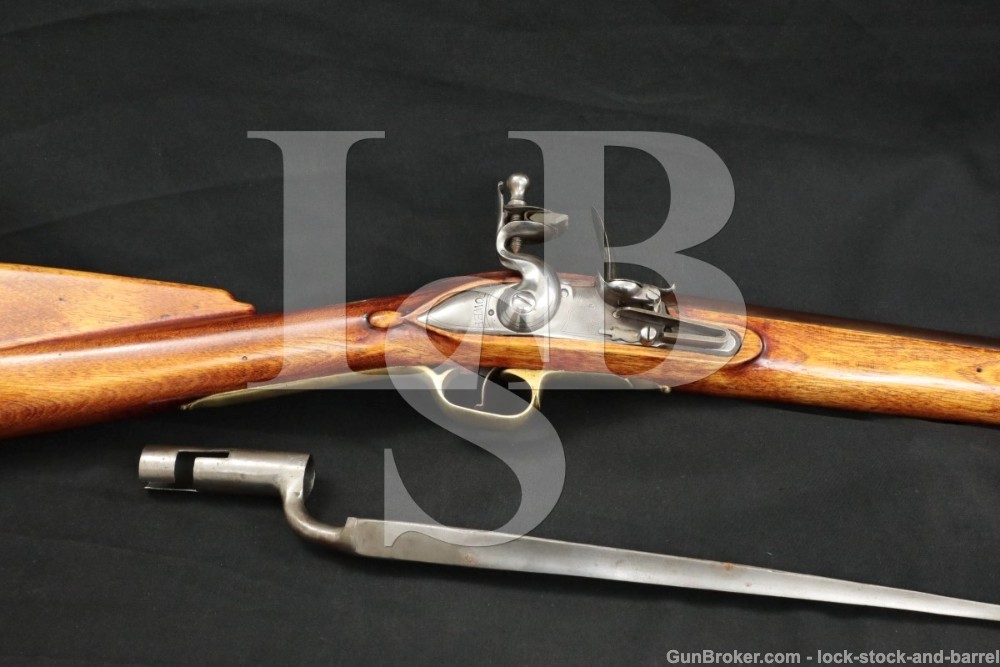 Sights / Optics:  The stud affixed to the barrel at the front for the bayonet is used as a front sight.  There is no rear sight.

Stock Configuration & Condition:  The stock is a one-piece, polished wood, inlaid with brass inserts, with a brass butt plate and front cap. The stock has a cylindrical “hand-rail” wrist and a swell at the rear ferrule.  The stock is in great shape with very few dings or compression marks, the most notable are in the left of the wrist.  There are no chips or cracks. The length of pull is 14”. This stock rates in Fine condition.

Bore Condition: The bore is bright and smooth with no pitting or corrosion.

Overall Condition: The musket retains about 80% of its finish.  The mechanics function well.  The trigger and hammer show light oxidation. There is some light finish wear on the lock plate. The frizzen shows operational wear, and is also making contact with the back of the barrel when closed over the pan, wearing the finish on the metal. The screw heads are sharp and all markings are clear. Overall this gun rates in Very Good-Fine condition.

Mechanics:  The action functions correctly. The trigger has light play side to side.  The frizzen makes contact with the barrel when it is set ready to fire, but does not appear to be bent.  The ramrod is in good shape and fits snugly inside the ferrules on the underside of the barrel. The bayonet attaches to the barrel securely and fits with mild play when attached. We did not fire this rifle. As with all used firearms, a thorough cleaning may be necessary to meet your maintenance requirements.

Box, Paperwork & Accessories: The bayonet is in good shape.  It measures 17 ½” from point to barrel opening, is straight and attaches to the gun easily, and shows normal oxidation.

Our Assessment: The Short Land Pattern Tower Muzzleloading Flintlock Musket, also known under the nickname of “Brown Bess,” was the standard infantry musket for the British Army for over 100 years, with only slight changes in design during that time.  This firearm was also supplied to the 13 Colonies of British America, because British citizens were required by law to own arms and ammunition for militia duty.  These guns were then used against the British later during the Revolutionary War.  Over time, the Brown Bess also saw use during the Musket Wars when different tribes of Maori warriors used rifles purchased from European traders in order to gain territory in New Zealand.  They were used by the Mexican Army in the Texas Revolution and later in the Mexican-American war.  Brown Bess saw service in the First Opium War in India and were even used by the Zulu Warriors during the Anglo-Zulu War.

This rifle was historically relevant to almost every major military conflict throughout the colonized world in the later 1700s to just prior to the Civil War, and was made to stand the test of time.  This modern reproduction would make an excellent addition to your collection.