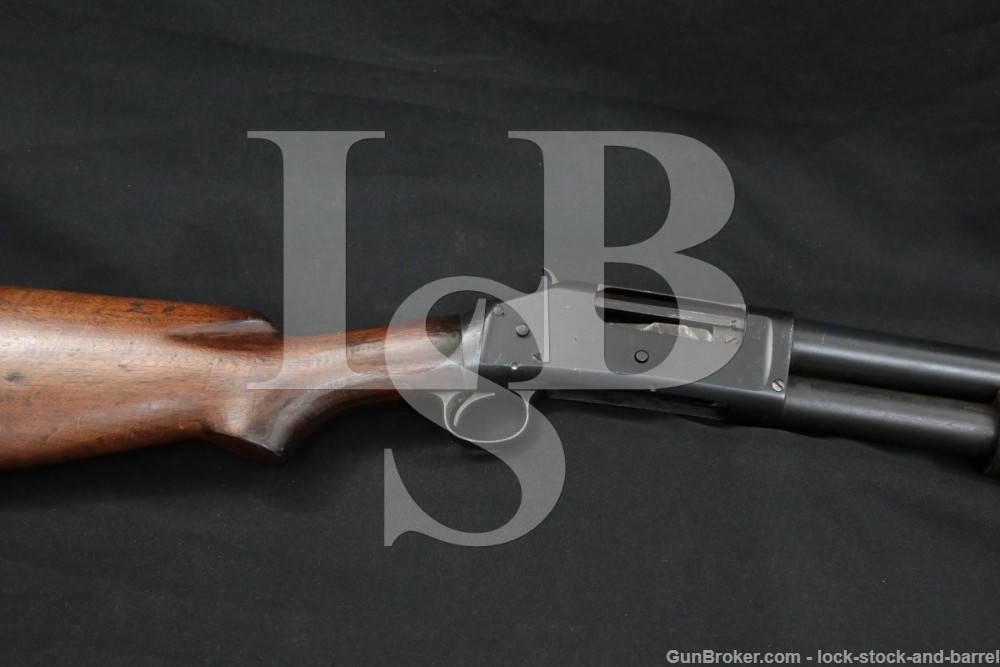 Barrel Length: 20 1/4”. There is wear on the muzzle which appears to be from impacts. We suspect that the muzzle was damaged and then repaired.

Stock Configuration & Condition: The stocks are two-piece walnut with a forend which has 17 grooves, fluted low comb, semi-pistol grip, checkered black hard rubber Winchester Repeating Arms Co. buttplate and sling swivels mounted to a plate in the belly and to the bayonet lug. The stock design and sling plate in the belly are consistent with WWII issue trench guns. The slide handle has a few scattered minor marks and some discoloration. The buttstock has scattered nicks, dings, scuffs and scratches. There is discoloration at the front and rear. There are cracks on each side of the wrist at the front. The toe has been sanded down, possibly having chipped and been smoothed out. The buttstock is notably proud to the buttplate. The LOP measures 13 3/4″ from the front of the trigger to the back of the buttplate. The plate has moderate-heavy wear. Overall, the stocks are in about Good condition as refinished and not original to the gun.

Bore Condition: The bore is semi-bright with some scattered light erosion and stubborn fouling. There are small bumps which line up with the bayonet lug mounting bolts.

Overall Condition: This shotgun retains about 85% of its current metal finish. There are several nicks and scratches scattered throughout, some through and others under the finish. There is a concentration of marks on the magazine tube behind the sling swivel. There is wear on the muzzle, it appears consistent with impacts, we suspect the muzzle was damaged and then repaired. There is finish wear on the magazine tube forward of the slide handle. There is scattered minor surface oxidation. The lifter pin has been staked in place. There are some minor dents and deformation on the heat shield, one of the bayonet lug assembly’s mounting screws is missing. Remaining screw heads range from sharp to disfigured with useable slots. The markings range from clear to worn, but legible. Overall, this shotgun is in about Good-Very Good condition as refinished.

Our Assessment: After observing the Great War for the first three years, it became clear to the U.S. that serious close-range firepower was needed in trench warfare. The Model 1897 Trench grade was an evolution of this idea. The pre-existing Winchester Model 1897 was modified by adding a perforated steel heat shield over the barrel which protected the hand of the user from the barrel when it became over-heated, and an adapter with bayonet lug for affixing an M1917 bayonet. They were so effective and brutal in combat that the German high command once announced they would execute any US soldier captured with one in his possession. This example appears to have been produced during the Great War, but has parts installed consistent with WWII trench guns including the buttstock and bayonet lug/heat shield assembly. It retains the majority of its new blue finish and the mechanics are strong. The condition and features of this gun might imply that it was a WWI trench gun which remained in inventory and received later pattern parts during its service life, and the barrel appears to have received damage to the muzzle which was repaired. This will make a nice display piece or placeholder for an all parts original trench gun in a WWI, WWII or US small arms collection. Please see our photos and good luck!