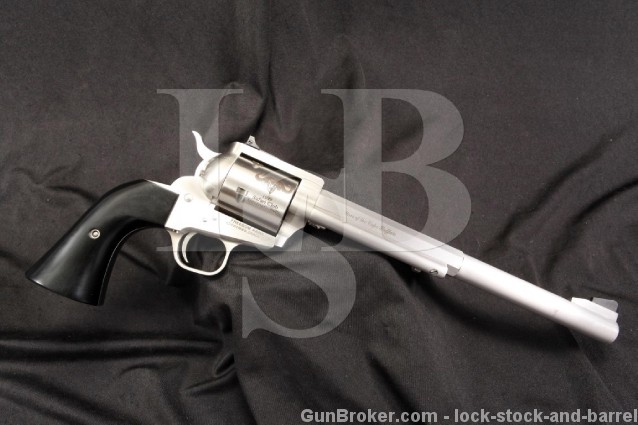 SOLD FOR: $2,340.00
LSB#: 130532BL60
Make: Freedom Arms
Model: Model 654 Premier Grade Safari Club International “Year of the Cape Buffalo”
Serial Number: J-SCIXXVII
Year of Manufacture: Modern (1999?)
Caliber: .41 Remington Magnum
Action Type: Single Action Revolver with Side Loading-Gate Cylinder
Markings: The left side of the barrel is marked “Freedom Arms Model 654 .41 MAG / Freedom, Wyoming U.S.A.” The left side of the receiver is marked “Pat. No. 4126953”. The bottom of the frame is marked “J-SCIXXVII” and the right side is marked “Freedom Arms / Premier Grade”. The right side of the barrel is marked “Year of the Cape Buffalo”. The circumference of the cylinder is marked in 2 places with a picture of a cape buffalo and “1999 / Safari Club / International”. The rear face of the cylinder is marked “XXVII”.
Barrel Length: The half round and half octagon barrel is 10” in length.
Sights / Optics: The front sight is a blued serrated ramp on a base. The rear sight is a flat topped square notched sight that is adjustable for windage and elevation and screwed to the top strap.
Stock Configuration & Condition: The grips are the Ebony Micarta grips as shown on the Freedom Arms website. The grips show one or two light handling marks and a deep compression on the back of the left grip. The grips rate in about Fine overall condition.
Type of Finish: The round part of the barrel has a matte finish and the rest of the revolver is brushed stainless steel
Finish Originality: All Original
Bore Condition: The bore is bright and the rifling is sharp and deep. There is no erosion in the bore.
Overall Condition: This handgun retains about 98% of its metal finish. The barrel shows light handling marks with a large scratch on the right side of the rounded section. The octagon section of the barrel shows very small compression marks on the edges. There is a light mark on the left side of the grip frame above the rear of the trigger guard and a few light marks in the backstrap and bottom of the grip. The cylinder shows light handling marks but does not have a drag line. The screw heads are sharp. The markings are clear. Overall, this handgun rates in about Excellent condition.
Mechanics: The cylinder lock-up is Perfect, with NO PLAY WHATSOVER, and the trigger is light and crisp. The action functions correctly. We did not fire this handgun.
Box, Paperwork & Accessories: None
Our Assessment: As paraphrased from Wikipedia: “In 1963, Elmer Keith and Bill Jordan, with some help from Skeeter Skelton, petitioned Smith & Wesson, Remington, and Norma to produce a pistol and ammunition in .41 caliber which would fall between the extant .357 Magnum and .44 Magnum cartridges in ballistic performance, and at the same time address perceived shortcomings with those loads.” Although the idea was great, S&W implemented the revolver on their heavy N frame, which the police thought was too heavy, and Remington’s police loads were considered too hot. As a result, the .41 Magnum never really caught on with the police. Hunters favor it because while it lacks the muzzle energy of the .44 Mag., it is faster in its lighter loadings, producing 1871 fps. with a 170 gr. JHP bullet, and generally has lighter recoil than the .44 Magnum. This revolver is great for hunting varmints and medium sized game, as well as metallic silhouette shooting. This is a great looking extremely well made revolver with several factory “premier” upgrades (e.g. sights, finish, Micarta grips, action). It is not often we see a cylinder lock-up this good, so with its sharp bore, accuracy isn’t going to be a problem.