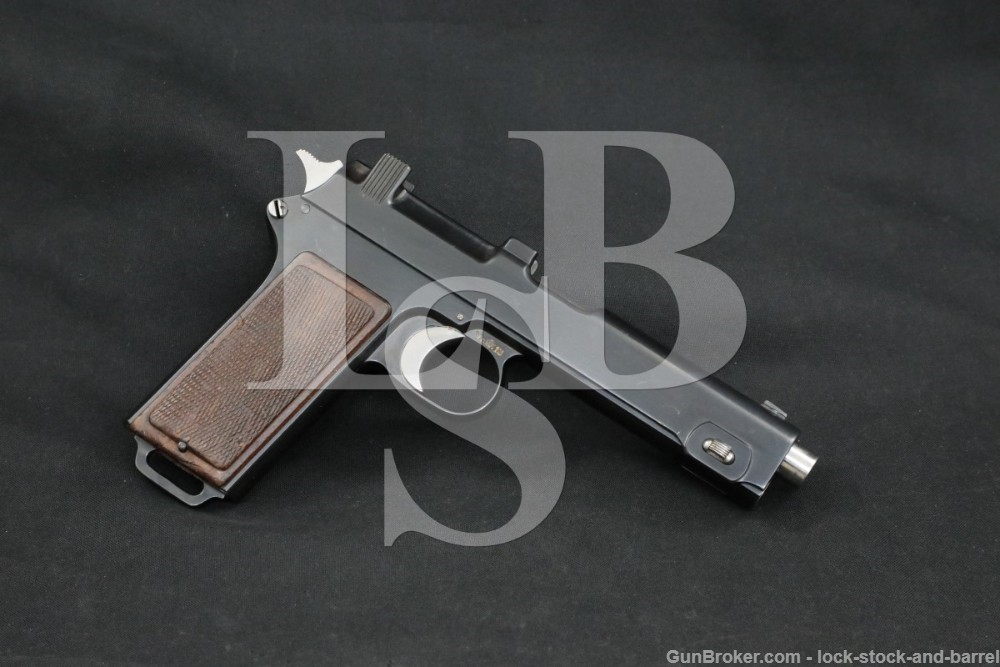 Stock Configuration & Condition: The grips are two-piece checkered wood panels with smooth borders. The grips show light handling wear with some scattered nicks, scuffs and compressed checkers. The checkering is generally well defined. There are no chips or cracks. Overall, the grips are in about Very Good condition.

Overall Condition: This handgun retains about 97% of its current metal finish. The finish is generally strong throughout with a few scattered light nicks and scratches. There is some scattered pinprick erosion under the finish. The action has minor operational wear. Most markings are clear, the slide’s serial marking is worn with the first “3” incomplete. Overall, this pistol is in about Very Good-Fine condition as refinished.

Our Assessment: Borrowing features from both the Roth-Steyr 1907 and the Colt 1900-1911 series of pistols, the Steyr M1912 is a rotating-locking barrel, internal magazine semi-automatic pistol. The pistol is frequently referred to as the Steyr-Hahn or “Steyr Hammer” due to its external hammer. The pistol was an Austro-Hungarian sidearm during WWI with other contracts for sales to Chile and Romania. This example was made in 1918 and was issued to the Austrian Wiener-Neustadt Land District in 1918. While earlier production had letter suffixes in their serial numbers, during 1918 there was a separate 5-digit serial range for these pistols which had no letters, making this a less common variant. Many of the pistols were also re-chambered for 9mm Luger in the 1940s for use by local police forces under the Nazi regime, while this example has not been converted. The pistol is in about Very Good-Fine condition as refinished with 97% of its new finish remaining, a great bore and strong mechanics. This pistol is in really nice condition for having survived inter-war Austria, Anschluss and a world war, though it would likely not have seen any front-line action. This variation should be a big hit with collectors of WWI era pistols, especially with its matching numbers. Please see our photos and good luck!