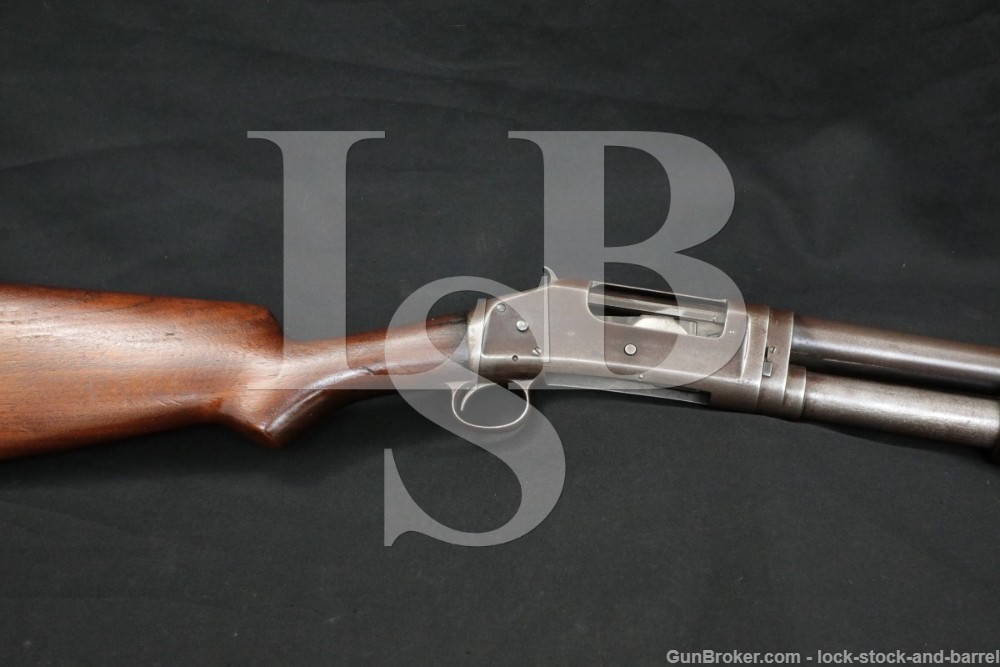 Stock Configuration & Condition: The stocks are two-piece walnut with grooved slide handle, pistol grip, straight comb and checkered black hard rubber Winchester buttplate. The stocks have some scattered light nicks, scuffs, and scratches. The buttstock’s finish has patches of thinning. The forend has a thin crack at the right-front edge. The LOP measures 13 3/4″ from the front of the trigger to the back of the buttplate. The plate has scattered wear, heaviest at the heel and toe. Overall, the stocks are in about Very Good condition.

Overall Condition: This gun retains about 25% of its metal finish. Most remaining finish is on the barrel at the bottom-front and on the bottom over the magazine tube. There is some finish at the front of the magazine tube, on internal parts such as the bolt and lifter and in protected areas on the receiver flats around the ejector, slide release button and pin heads. Other surfaces have mostly worn to white or gone to a light patina. There is some scattered light surface oxidation, nicks, scuffs and scratches. There is a dent in the top of the barrel about 4″ from the muzzle, visible in the bore. The action shows operational wear. The screw heads range from sharp to tool marked with strong slots. The markings are clear. Overall, this shotgun is in about Good condition.

Our Assessment: The Model 1897 shotgun is another of John Browning’s famous designs. It was the first pump action shotgun to see notable commercial success, helped along by Winchester buying out the designs of competitors. It would go on to be a staple of American sportsmen for the better part of the 20th century as well as being used for Trench Guns in both World Wars and seeing use by law enforcement agencies across the nation. The guns would also see use in the late 19th and early 20th centuries by Wild West Show performers, such as the 101 Ranch which toured from 1907 until 1930 across the United States, England and Latin America. Glenn “Ammunition Shorty” Klischko served as a gunsmith for the travelling show until 1926. Kischko was the son of a cossack performer and was actually born in one of Buffalo Bill’s show wagons in 1882. Based on the markings on this 1897, it appears to have been Ammunition Shorty’s own gun, marked with his name, nickname and 101 Ranch. Whether you’re a fan of Oklahoma’s old west tradition, Winchester shotguns, or just guns with an interesting history, this would be a great addition for any collection. Please see our pictures and good luck!