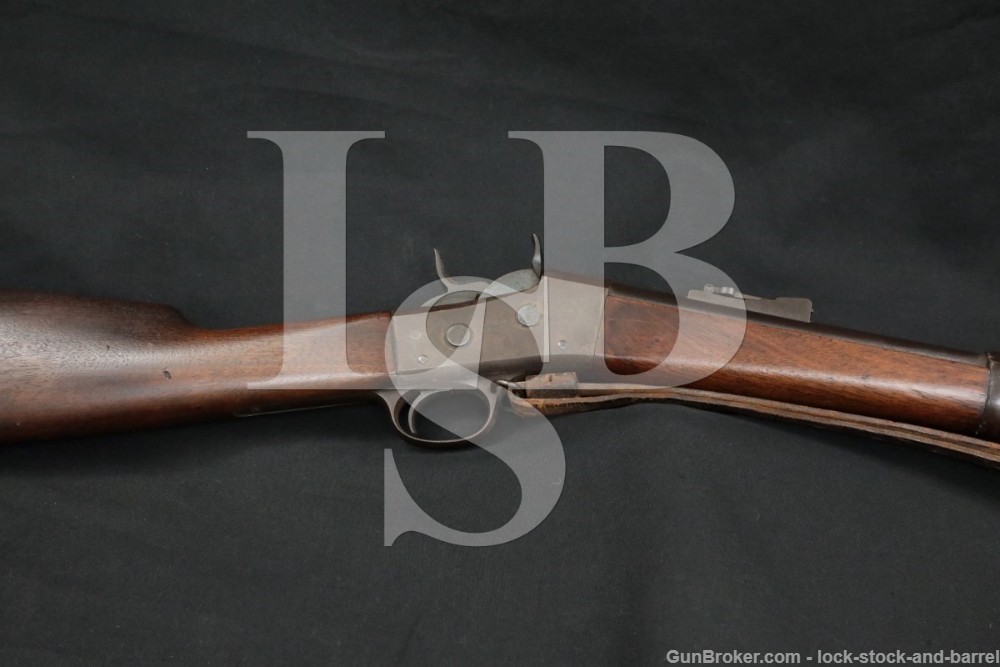 Caliber: .45-70 Government chambers but the chamber length is about 3”.

Stock Configuration & Condition: The stock set is walnut with a straight grip, straight comb, semi-carbine style buttplate, metal nosecap, and two barrel bands. There are some scattered dings, compressions, scratches, and a few scrapes. Some of the defects have damaged or removed surface wood. There are some spots of finish loss. The LOP measures approximately 13 1/8” from the front of the trigger to the back of the buttplate. The buttplate has finish loss, some erosion, and some scabs. The stocks rate in about Very Good condition.

Bore Condition: The bore is bright with sharp rifling. There are some small spots of erosion and some oxidation.

Overall Condition: This rifle retains about 60% of its metal finish. The receiver has mottled patina with some surface oxidation and a few little scratches. There are some tool marks on the rear of the breechblock to either side of the hammer. The hammer has some impact marks into the metal from contact with the firing pin. The barrel has a coat of surface oxidation and patina with some scattered dings and minor scratches. There are portions of the barrel that are slightly proud to the receiver flats. The screwheads are mostly sharp but some are lightly tool marked with strong slots. The markings are clear. The rifle rates in about Very Good condition.

Box, Paperwork & Accessories: Included is a slotted cleaning rod under the barrel and a leather sling. The sling has some scattered scrapes, creases, scuffs, and a few little tears. The sling rates in about Good condition.

Our Assessment: In the late 19th and early 20th century, over 1,000,000 Remington Rolling Block military rifles and carbines were manufactured by the Remington Company, in a variety of calibers and barrel lengths, based on their No. 1 rifle. The action was so simple and rugged that they were virtually impossible to wear out. Remington exported these rifles all over the world and most saw quite a bit of use and abuse over the course of a long service life. This example appears to be a sporting rifle Number One frame paired with an aftermarket 28” barrel. The barrel and forend assembly appears to be of the proper vintage and looks every bit Remington wood and steel. On occasion Remington would receive a large contract and would use just about any parts on hand as long as the caliber was correct or this could be a custom order. Please see our photos and good luck!