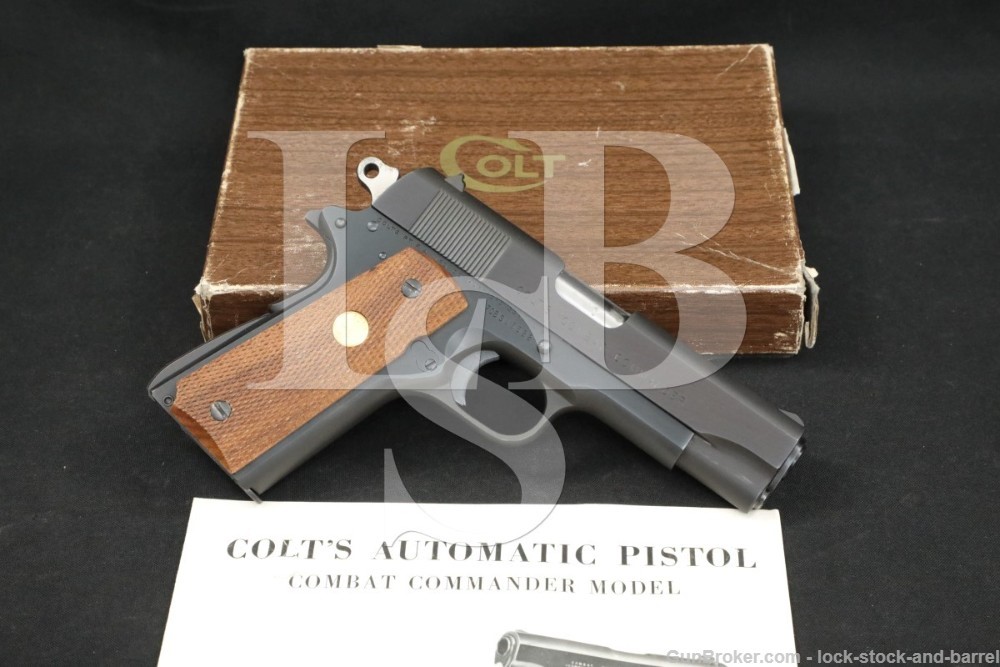 Stock Configuration & Condition: The grips are two-piece checkered walnut with gold-colored Colt medallions. The grips have no notable wear or damage, only light handling marks. There are no chips or cracks. The checkering is sharp. Overall, the grips are in Excellent condition.

Overall Condition: This pistol retains about 97% of its metal finish. The balance is mostly in operational wear, most visible on the right of the slide in front of the dust cover. There are a few other scattered minor scuffs and scratches. The screw heads are sharp with minor tool marks in the slots. The markings are clear. Overall, this pistol is in about Fine-plus condition.

Mechanics: The action functions correctly. The trigger is crisp. The slide has minor play to the frame. We did not fire this pistol. As with all used firearms, a thorough cleaning may be necessary to meet your maintenance standards.

Box, Paperwork & Accessories: This pistol comes in a two-piece faux-wood cardboard Colt box with serial-matching label, manual and a single 7-round magazine marked “COLT / 45 AUTO.” on the floorplate. The box has scattered storage wear with fraying at edges and corners, one corner of the lid portion has a tear, in about Good condition.

Our Assessment: Introduced by Colt as a lighter-weight version of the 1911, the smaller size of the Commander was popular and soon they were offered in a number of variations including different frame materials and calibers. While the original development centered on an aluminum-frame 9mm as a candidate for US Military post-war officer’s pistols, the steel frame Combat Commanders such as this one are what most people think of when they think of “The Commander”. This example was produced in 1973, chambered for .45 ACP, and was originally sold in Germany. Many Colt firearms sold in Germany in this period which have made their way back to the United States were sold to American servicemen stationed there during the Cold War. Whether this piece is a “Cold War Bring-Back” or not, it is certainly in good shape and with its interesting markings would make a great addition to a Colt collection. Please see our photos and good luck!