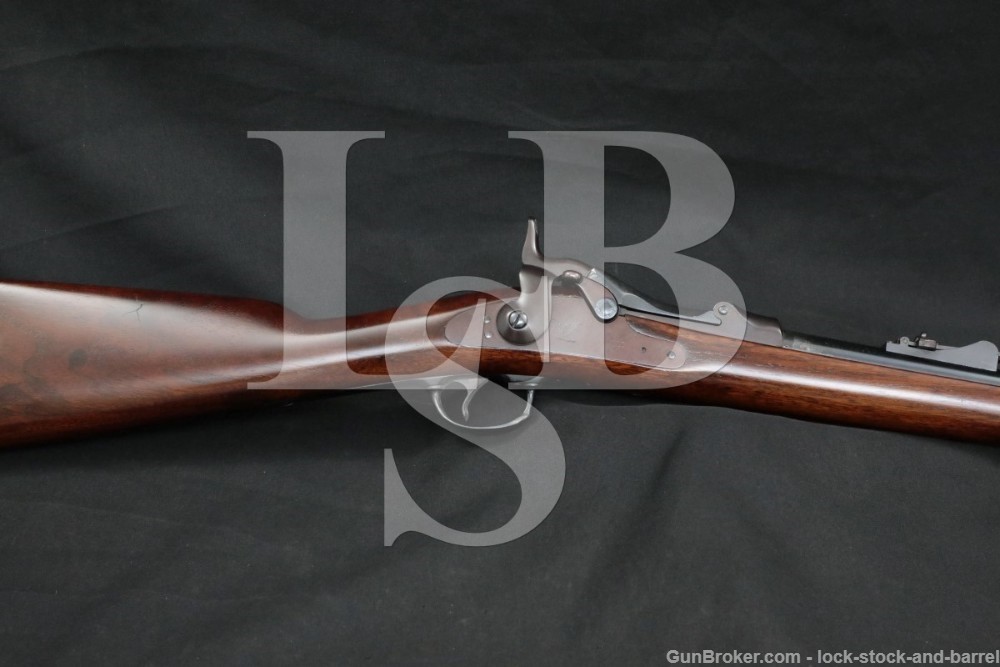 Barrel Length: 22”. The barrel may have been cut, at has at least been re-crowned.

Sights / Optics: The front sight is blade in a slotted base fixed to the barrel. The rear sight is an 1879 Carbine “C” marked sight. The rear sight’s slider is installed upside-down, preventing it from sliding all the way to the bottom.

Stock Configuration & Condition: The half-stock is a one-piece smooth walnut with a straight grip, single barrel band (no sling mount), sling bar, and a metal buttplate. The bottom of the forend has a wood filler from a previous cleaning rod hole and there is a storage compartment under the buttplate, though there is no door in the plate. There is a repaired chip loss at the rear mount of the sling bar and a couple of small losses at the front of the guard and the toe. There are a few other scattered light nicks and scratches. There are no cracks. The LOP measures approximately 13 1/8″ from the front of the trigger to the back of the buttplate. The plate has scattered dings, scracthes, and some light erosion under its finish. Overall, the stock is in about Fine condition as refinished and modified Antique.

Bore Condition: The bore is gray. The rifling is sharp where not interrupted by erosion. There is scattered light erosion and infrequent light pitting in the bore. The muzzle looks as though it has been very slightly counter-bored, it is possible the bore was sleeved in the distant past.

Overall Condition: This rifle retains approximately 90% of its current metal finish. The most notable finish wear is toward the muzzle-end on the barrel. There is a light scrape on the left of the barrel at the rear. The lockplate, receiver, hammer and breech-lever have a plum hue. There is scattered erosion under the finish, most notable on the breech-block and the rear of the barrel. There are a few scattered light nicks and scratches. The action shows light operational wear. The screw heads range from sharp to tool marked with stront slots. The markings are generally clear, some show wear or are slightly obscured by erosion. Overall, this rifle is in about Very Good-plus condition as Antique & Refinished.

Mechanics: The action functions correctly. The rifle has a three click hammer. We have not fired this rifle. As with all used firearms, a thorough cleaning may be necessary to meet your maintenance standards.

Our Assessment: The Model 1873 “Trapdoor” Springfield was the first standard-issue breech-loading rifle adopted by the United States Army and it and the Model 1884 and 1888 Trapdoors were the main service rifles of the U.S. Military until they were gradually replaced by the Springfield Model 1892 bolt-action rifle. George Custer’s troops were armed with them at the Battle of the Little Bighorn, and they were still used by secondary units during the Spanish-American war in 1898. This is an attractive example which has been converted to a carbine configuration. It has a proper carbine sight, but the barrel appears to have been cut down and the stock has been modified from a rifle stock. The rifle is in about Very Good-plus condition with a decent bore and some erosion under its new finish. Since being refinished, the gun doesn’t appear to have seen much use, so it still looks great. Please see our photos and good luck!