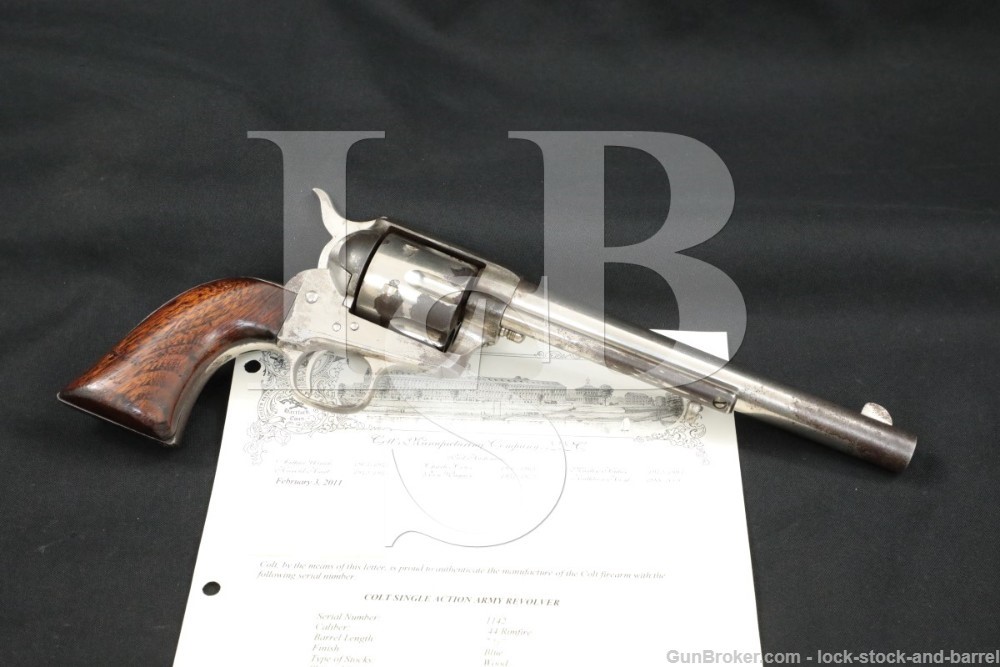 Stock Configuration & Condition: The grip is one-piece smooth walnut. The grip shows scattered nicks, scuffs and scratches with thinning finish at the bottom edges on each side. There are slight gaps to the frame at the bottom-front corner on each side, possibly minor losses or just slight warping from age. The grip is slightly shy to the grip frame, again this could possibly be shrinkage from age, or it could indicate refinishing. Overall, the grip is in about Very Good-plus condition as Antique.

Finish Originality: The letter indicates that this revolver shipped with a blued finish, without the letter we would have guessed the finish was original. It is possible, even likely, that this revolver was nickel plated by Schuyler, Hartley & Graham (see Our Assessment).

Bore Condition: The bore is gray with well defined rifling. There is light-moderate erosion scattered through the bore with some light pitting.

Overall Condition: This revolver retains about 65% of its nickel finish. There is finish loss on the left of the barrel at the front and rear, the right at the muzzle, the left of the frame toward the front and on the outside of the recoil shield, the butt, the backstrap and the front portions of the cylinder. There are some scattered light nicks and scratches. The cylinder has a thin turn-line. Most worn areas show surface oxidation. The screw heads range from sharp to tool marked with strong slots. The markings are clear. Overall, this revolver is in about Fine condition as possibly refinished.

Mechanics: The action functions correctly. Lockup produces very little play side-to-side and barely perceptible end-shake on all six chambers. The trigger is crisp. The cylinder has a removable bushing. We did not fire this revolver. As with all used firearms, a thorough cleaning may be necessary to meet your maintenance standards.

Box, Paperwork & Accessories: This revolver comes with a Colt Historian letter which shows that this revolver shipped November 3, 1877 to Schuyler, Hartley & Graham in New York City, New York as one of 50 guns of the same type in the shipment. The letter is in Excellent condition.

Our Assessment: Colt’s Single Action Army revolver is an American icon, and with good reason. The revolver has a deep association with the American West, was the first repeating cartridge-firing sidearm to be adopted by the United States, and is still in production today, nearly 150 years after it was introduced. The rich history of this revolver, as well as the many different variations, make it a source of great interest for collectors, and this example is a great specimen. Chambered for .44 Rimfire, the rimfire SAs are among the most rare variants, with approximately 2,000 produced in total, likely fewer as Kopec’s survey included serial 1892 as the highest observed serial number. Of those .44 rimfires, at least some were converted to .22 rimfire. At the time the rimfire revolvers were introduced, the .44 rimfire cartridge was already well on its way to obsolescence. This makes sense, as the SAA was adopted as the Model 1873 by the U.S. Army firing a center-fire cartridge, two years before the first SA Rimfire was shipped. This limited production would make any factory Colt SA Rimfire a wonderful addition to a collection, but there are likely significantly fewer guns still surviving. Kopec notes in his book “A Study of the Colt Single Action Army Revolver” that “The word ‘surviving’ when describing Rimfire SAs has greater than usual significance; this variation generally saw the hardest use of any Single Action model…In most places where Single Action .44 Rimfires were put to use, little or no time was spent on their maintenance and care. On a condition rating scale of one to ten, several known rimfires would rate about minus three” (Chapter III). Kopec goes on to note that of the guns observed in his survey, 80-90% of the 7 1/2″ barrels had been cut down. This example retains its 7 1/2″ barrel and even a serial-matched wood grip. While it shows its age, it still has strong mechanics and matching numbered parts, and we suspect this is due to it being shipped to Schuyler, Hartley & Graham in New York City, one of Colt’s largest distributors. The included Colt Historian letter notes that factory records show the revolver shipping with a blued finish, but the amount of remaining nickel finish as well as the high condition of the markings may indicate that this is an error, or that Schuyler, Hartley & Graham applied the finish themselves, possibly even as a display model, which would also have contributed to the revolver’s current high condition. This is a particularly rare Colt which will add to even the most advanced collections. Please see our photos and good luck!