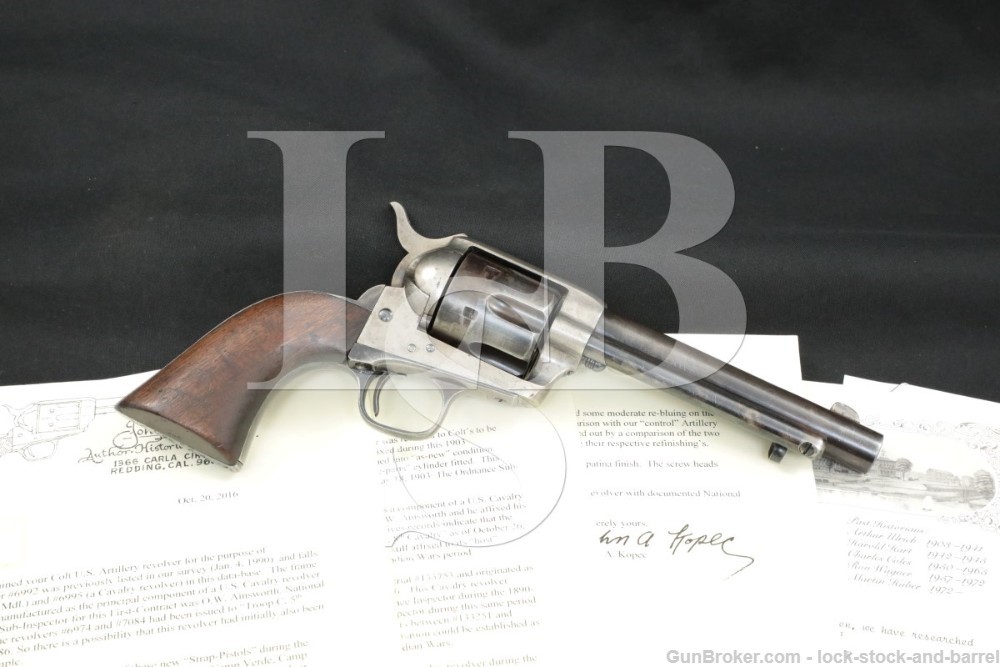 Finish Originality: Refinished. According to the included Kopec letter, the revolver was refurbished by Springfield Armory in 1898, again by Colt in 1903, and has since received moderate refinishing in the barrel, ejector and grip straps.

Bore Condition: The bore is semi-bright with sharp rifling. There is a patch of erosion in the left of the bore, about 1/2″ from the muzzle and a few other smaller spots of minor erosion.

Overall Condition: This revolver retains about 60% of its current metal finish. The finish is thinning at all edges. The grip straps have a mottled appearance in most areas with strongest color in the top of the backstrap, the butt toward the front, and the rear of the trigger guard. The frame’s case color has mostly muted with figuring visible in some areas, strongest on the right-front below the ejector boss. The cylinder has scattered finish and turn wear. The barrel and ejector housing have scattered finish wear. There are some scattered nicks, scuffs and scratches. Some of the worn areas show discoloration from oxidation. The screw heads range from sharp to tool marked with strong slots. The markings range from clear to worn and incomplete. Overall, this revolver is in about Fine condition as Arsenal refurbished Antique.

Mechanics: The action functions correctly. Lockup produces little play side-to-side and barely perceptible end-shake on all six chambers. The trigger is crisp. The cylinder has a removable bushing. We did not fire this revolver. As with all used firearms, a thorough cleaning may be necessary to meet your maintenance standards.

Box, Paperwork & Accessories: This revolver comes with a John A. Kopec Letter of Authentication dated October 20, 2016, paperwork from John Kopec including the invoice for the letter, and a Colt Historian letter. We found no discrepancies between the letters and the revolver. The letters are in Excellent condition.

Our Assessment: Colt’s Single Action Army is, perhaps more than any other, an iconic American pistol. It was the U.S. issue sidearm for the last two decades of the 19th century, used by pioneers, outlaws and lawmen across the expanding nation, and captivated audiences on the silver screen and television (and still does, today). This is an interesting example of the “Artillery” model, the product of re-working by a U.S. Arsenal in 1898 and again by Colt in 1903. The original arsenal refurbishment included cutting the barrel down to 5 1/2″ from the original 7 1/2″ and was performed in preparation for use in the Spanish-American War. According to the included Letter of Authenticity from Single Action Army authority John A. Kopec, this specific altered or “Artillery” model revolver was issued to Companies E and F of the 20th Kansas Volunteer Infantry. This unit was created due to the outbreak of the Spanish-American War, though they only got to the West coast by the time an armistice was declared. They left with the Fifth Philippine Expedition and arrived in Manila four days before the Treaty of Paris was signed, ending the war. Not quite two months later, the Philippine Insurrection started, and the Kansas Volunteer regiment would be involved in the Manila and Malolos campaigns, returning to the United States in October 1899 and then being mustered out of service. After this was when it was sent back to Colt for a second refurbishment, a detail noted in both the Kopec and Colt letters. Since then it appears to have been well cared for, retaining a nice bore and strong mechanics. This is a revolver with a rich and documented history, it will make a great addition to even advanced Single Action Army collections. Please see our photos and good luck!