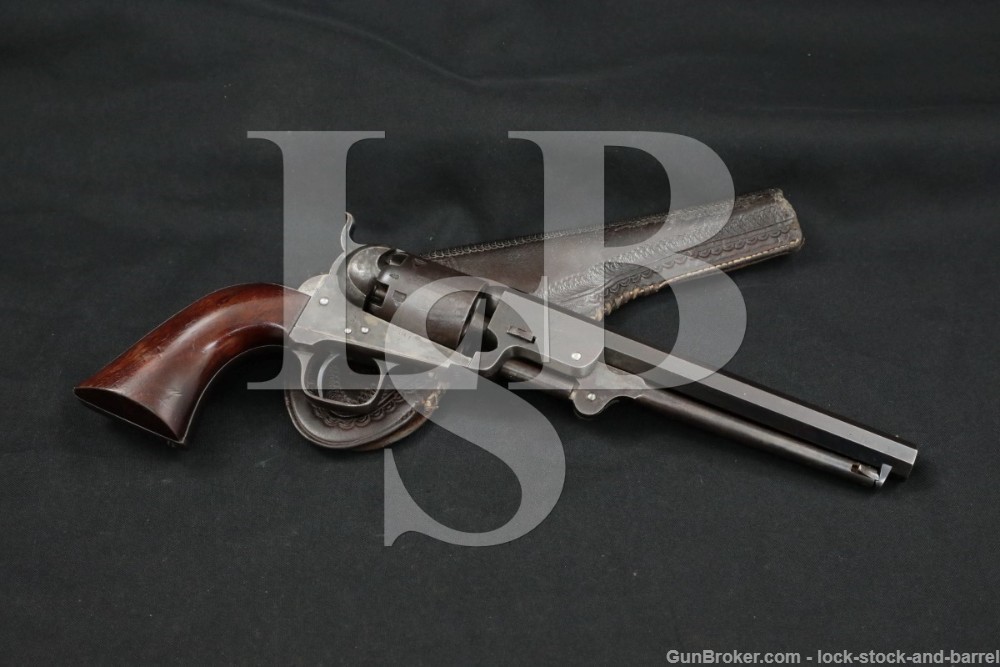 Sights / Optics: The front sight is a conical brass post threaded to the barrel at the muzzle. The rear sight is a “V” notch at the front of the hammer.

Stock Configuration & Condition: The grip is one-piece smooth walnut with swells toward the top on each side, typical of the London produced Colts. The grip has light handling wear with scattered nicks, scuffs and scratches. There are no cracks. Overall, the grip is in about Fine condition as Antique.

Bore Condition: The bore is semi-bright and the rifling is sharp. There is scattered light erosion and infrequent minor pitting in the bore.

Overall Condition: This revolver retains about 55% of its metal finish. The balance has mostly gone to a light patina. The barrel retains some strong blue on the bottom shoulders and the top-left shoulder. The cylinder has some remaining at the rear. The safety studs between chambers on the rear face of the cylinder range from well defined to slightly worn, but serviceable. The nipples have minor wear and erosion, but are unobstructed. There is good case color remaining on the loading lever, frame and hammer, more on the frame and hammer. There is some scattered minor erosion, most notable in the iron grip straps. The markings are clear, with good detail left in the naval scene. The round-topped screw heads range from sharp to tool marked with strong slots. Overall, this revolver is in about Very Good-Fine condition as Antique (see Mechanics).

Mechanics: The hammer does not catch properly at half-cock. Otherwise, the action functions correctly. The cylinder lockup has light play on all 6 chambers. The barrel has no play to the frame. We have not fired this revolver. As with all used firearms, a thorough cleaning may be necessary to meet your maintenance standards.

Box, Paperwork & Accessories: This revolver comes with a tooled leather holster. The holster shows wear consistent with the age of the gun, having a few short tears, a few broken stitches and general age wear scattered throughout, in about Good-plus condition.

Our Assessment: The Colt 1851 Navy revolver was produced by Colt up until 1873 when Colt cartridge revolvers were introduced. It got its name from the Navy battle scene on the cylinder that Colt added to commemorate the victory of the Second Texas Navy at the Battle of Campeche in 1843. The 1851 was also part of Colt’s plan to expand sales overseas. Samuel Colt himself took several hundred revolvers with him to the Great Exhibition at the Crystal Palace in London. He would go on to extol the virtues of his interchangeable parts and assembly-line manufacturing process. In an effort to make it more cost-effective, and less tax-intensive, to sell his revolvers in England, he would eastablish Colt’s London Armory which would produce 1851 revolvers from 1853 until 1857. The earliest examples were assembled from parts produced in Hartford, but this example is one of the revolvers known as a “London-London” among collectors, with production entirely performed at the London Armory. These models have distinctive features such as the domed-heads of their screws, the palm-swells on their grips, and, of course, Colt’s London barrel address and British proof marks. This example has been particularly well preserved, with much of its original finish remaining, all matching serialized parts, and strong mechanics apart from the half-cock engagement. This example is also particularly interesting due to the markings on its grips. Following the American Revolution, some 40,000 loyalist subjects in America chose to move to Canada so that they could continue living under the rule of their King. This increase in population was sufficient for the government to divide the Eastern portions of Canada into “Upper” and “Lower” Canada. While the British Crown initially supplied weapons for the local military forces, in the early 1850s their arms manufacturing was monopolized by the needs caused by the Crimean war, and the Canadian militias were expected to find their own arms. Canadian purchasing agents procured approximately 800 of the London-produced Colt 1851 revolvers. This example was issued to D company of the Upper Canadian militia, specifically to volunteer #9 of D company. The scarcity of this revolver is enhanced by the fact that there are certainly fewer in America today than were originally procured by the Canadians, and possibly fewer than remained in Canada. An example in this condition would make a great addition to a Colt collection, especially if it is focused on Colt’s percussion revolvers or foreign sales. Please see our photos and good luck!