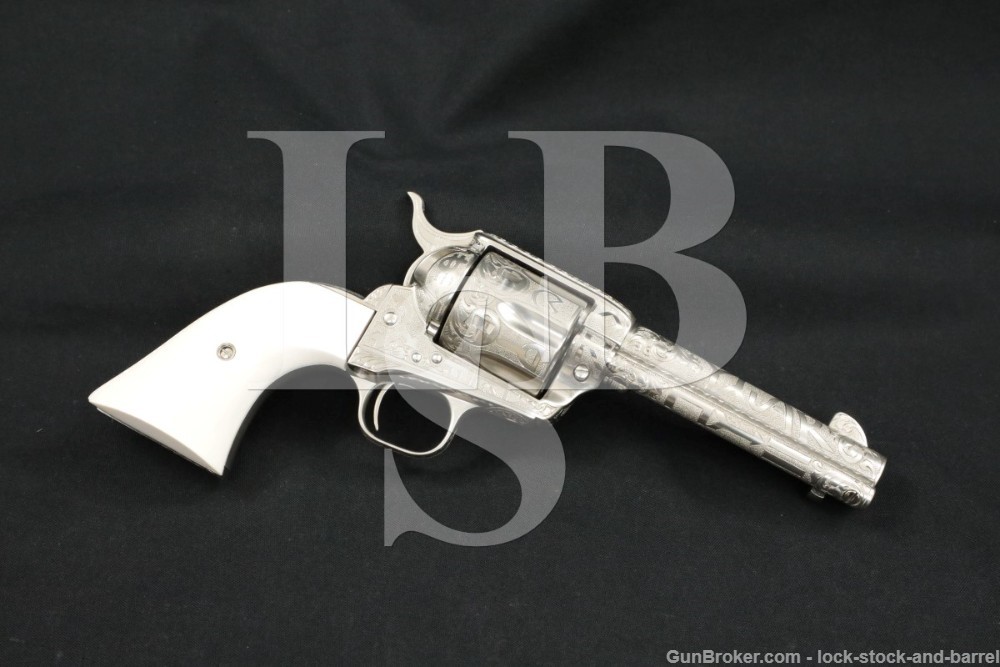 Markings: The top of the barrel is marked “COLT’S PT. F.A. MFG. Co. HARTFORD CT. U.S.A.”, the left is marked “COLT SINGLE ACTION ARMY .45”. The left of the frame is marked “PAT. SEPT 19. 1871 / JULY 2, 72 JAN. 19, 75” and with a rampant colt logo. The left of the trigger guard is marked “VP” in triangle at the front and “0” at the rear. The bottom of the frame and the left of each portion of the trigger guard are each marked “SA94757”. The rear face of the cylinder is marked “45”, the front face of the cylinder is marked “757”. The revolver has extensive engraving with scroll motif, borders and punch-dot matting in the negative spaces. The sides of the hammer have relief-engraved steer skulls. There are scattered relief-engraved cattle brands, including Half Circle, Broken Arrow, Hay Hook, Anchor, Walking Seven, Barbed Y, Flying Seven, Running W, and several others. The backstrap is engraved “JOE GARRO” above “1997” on banner. The engraving is signed “J. ADAMS” on the front of the frame at the bottom edge. The inside of each grip panel has “757” hand-written, the inside of the left panel has a red stamp “HAND CRAFTED BY / DC” (Dan Chesiak).

Stock Configuration & Condition: The grips are two-piece smooth bone panels. The grips have no notable wear or damage, only light handling marks. There are no chips or cracks. Overall, the grips are in Excellent condition.

Overall Condition: This revolver retains about 99% of its metal finish. There is no notable wear or damage, only light handling marks. The screw heads are sharp. The markings are clear. Overall, this revolver is in Excellent condition.

Mechanics: The action functions correctly. Lockup produces almost no play on all six chambers. The trigger is crisp. The cylinder’s bushing is fixed in the cylinder. We did not fire this revolver. As with all used firearms, a thorough cleaning may be necessary to meet your maintenance standards.

Our Assessment: The Colt Single Action Army is perhaps the quintessential old west handgun, produced for more than a century, serving the U.S. Army as its sidearm from 1873 into the first world war and captivating audiences on the silver screen. The SAA was discontinued by Colt as it tooled up to provide for the WWII war effort, and it was thought by Colt that the design was obsolete, swing-out cylinder revolvers had been around for half a century and autoloaders were gaining in popularity. Then, with the advent of television and western programs such as Hopalong Cassidy, The Lone Ranger, The Cisco Kid, and The Gene Autry Show, American interest in the guns that won the west was reborn. This example is from the 3rd Generation of Single Action Army revolvers and has been extensively engraved with a variety of American cattle brands. A previous auction for a different revolver with the same engraving pattern identified the gun as being from the Happy Trails Children’s Foundation. The engraving combined with the grips and silver finish makes for a beautiful piece for any collection. The engraving was performed by John Adams, a long-time engraver for Colt and Dan Chesiak made grips for the Colt Custom Shop, so this gun is of similar quality to a Colt Custom Shop piece. Please see our photos and good luck!