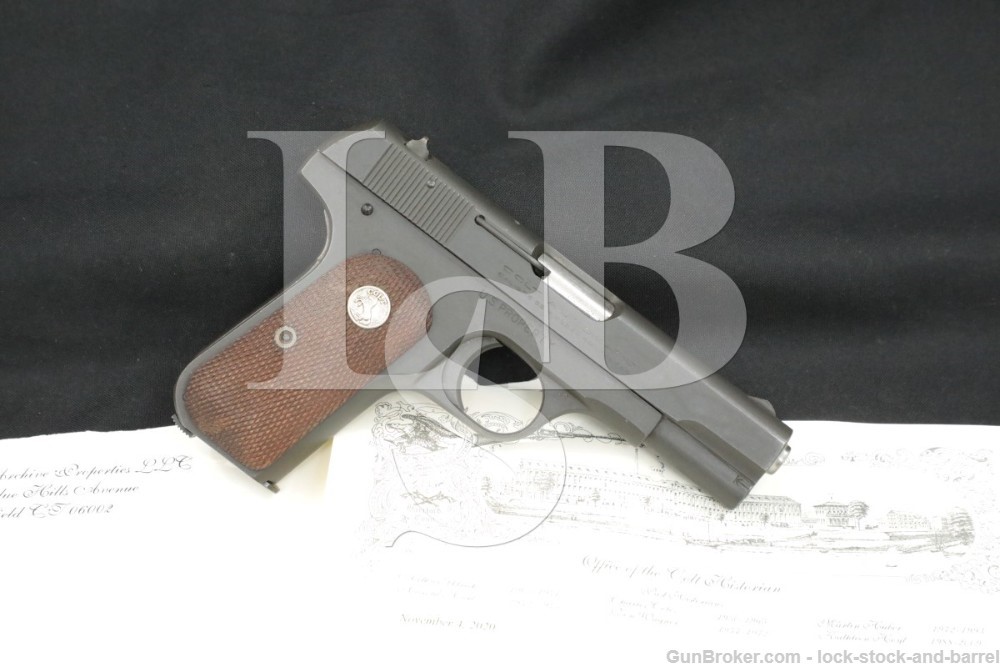 Stock Configuration & Condition: The grips are checkered walnut with silver-colored Colt medallions at their tops. The grips have minor handling wear with a few scattered light nicks and scuffs, most notable on the rear of the left panel. The checkering is well defined, generally sharp. There are no chips or cracks. Overall, the grips are in about Very Good-Fine condition.

Bore Condition: The bore is mostly-bright and the rifling is sharp. There is some scattered stubborn fouling in the bore, but no erosion.

Overall Condition: This handgun retains about 97% of its metal finish. The finish is generally strong throughout with minor thinning at some edges and a few scattered minor marks. The action shows minor operational wear. There is more notable wear and light damage on the barrel’s integral bushing, concealed when the slide is forward. The screw head is sharp. The markings are generally clear, the Ordnance wheel is incomplete, common on these pistols. Overall, this pistol appears in Fine-plus condition, but rates about Very Good due to the slide stop (see Mechanics) and the damage to the barrel bushing.

Mechanics: The safety functions properly as a safety, but when it is used as a slide stop, it does not properly hold the slide back unless continuous pressure is maintained on the lever. Otherwise, the action functions correctly and the slide has minor play to the frame. It has a grip safety, a manual safety and a magazine disconnect safety. We did not fire this handgun. As with all firearms, a thorough cleaning may be necessary to meet your maintenance standards.

Box, Paperwork & Accessories: This pistol comes with one blued 7 round magazine and a Colt Archives letter. The magazine is marked “CAL .32 / COLT” on the floorplate. The magazine has faint operational wear, infrequent minor surface oxidation, intact feed lips and a strong spring, in about Very Good-Fine condition. The letter states that this pistol shipped November 21, 1944 to the Transportation Officer at the New York Port of Embarkation in Brooklyn with a blued finish. The letter is in Excellent condition.

Our Assessment: In addition to its commercial popularity, the Colt 1903 served as United States General Officer pistols from the 1940s until their replacement by the M15 General Officers pistol in the 1970s. The Office of Strategic Services issued the Model 1903 to its officers during World War II, it was used by the British SOE, and they were issued to various other intelligence and investigative personnel. This U.S. Property marked example is in Very Good condition with 97% of its parkerized finish remaining, some wear and light damage to the barrel’s integral bushing, and strong mechanics apart from the slide stop which doesn’t reliably hold the slide back. The bore is bright with strong rifling. This would still make a great shooter, but with this pistol’s history, and coming with a Colt Archives letter, it will also be of great interest to Colt and WWII collectors. Please see our photos and good luck!