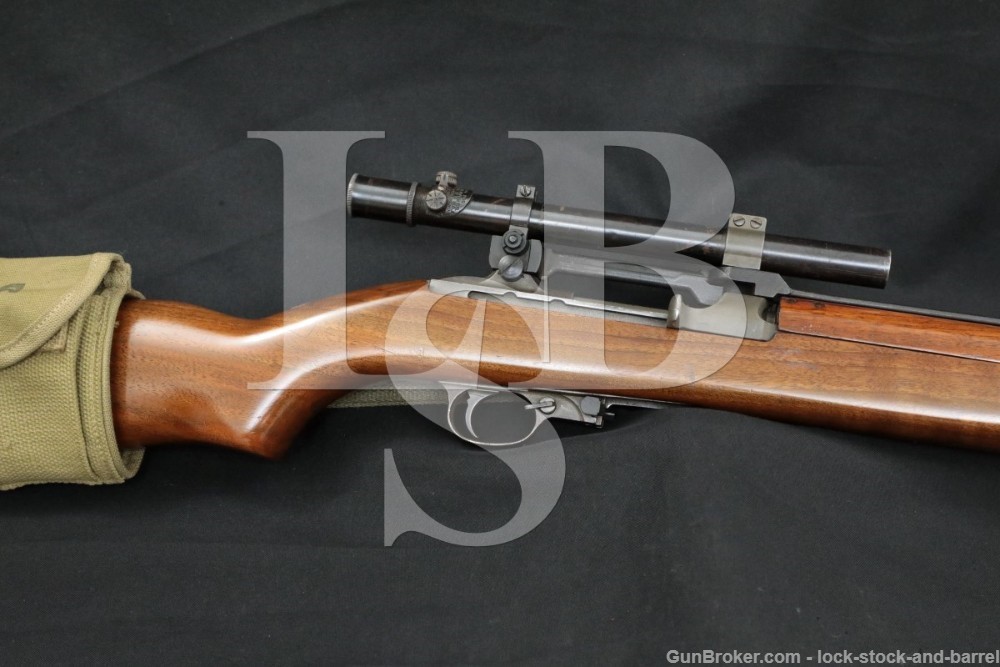 Markings: We did not disassemble the rifle to view the internal markings. The rear of the scope base is set into the reverse dovetail on the top rear of the receiver. We did not want to damage this area by drifting the base in and out of the reverse dovetail.
There is no import mark.The top of the receiver is marked “U.S. CARBINE / CAL. 30 M1” on the front and “INLAND DIV. / 5327908” on the rear. The top of the barrel is marked “INLAND MFD. DIV. / GENERAL MOTORS / 7 – 44” and “P”. The smooth push button safety is unmarked which is consistent with Inland and others (page 93 of Craig Riesch’s book, U.S. M1 Carbines Wartime Production 7th Edition). The front sight is marked “EU” which was used by other manufacturers (page 56). The Type III barrel band is marked “KI” which is an Inland mark (page 59). The sling well is marked with a small faded “crossed cannons” cartouche. The bottom of the trigger guard is marked with overstamped “letters”. The magazine pouch is marked “U.S’ on the front and “J.S.&S. CO. / 1943” on the rear.

Sights / Optics: The front sight is a post set between two protective wings. The rear sight has been removed to instal a scope base. The long 1 piece scope base is secured around a bolt stud at the front of the handguard and in the reverse dovetail cutout on the top rear of the receiver. A nut appears to be missing from the front bolt stud. The nut would lock down the front of the base. Two scope rings hold the fixed 2.5 power scope to the base. The scope uses a fine crosshairs reticle. The glass is lighty fogged. There are tiny black flecks at the edges of the tube. The adjustment knobs turn. The scope tube, scope base and scope rings show light scrapes & scuffs. The scope tube also shows light surface erosion. Overall the scope assembly is in about Very Good condition.

Stock Configuration & Condition: The stock had a pistol grip, Type III barrel band with sling loop & bayonet lug, sling well, sling pass through, and a metal buttplate. The buttplate shows discoloration and surface erosion. The wood shows several scrapes & scratches; most are small. A few have damaged small portions of the gloss finish or surface wood. The LOP measures 13 ¼ inches from the front of the trigger to the back of the buttplate. The stock rates in about Very Good Plus to Fine overall condition as refinished.

Bore Condition: The bore is semi bright; grey near the muzzle. The rifling is crisp. There is erosion near muzzle. The bore shows an M.E. of 2.

Overall Condition: This rifle retains about 94% of its metal finish. The metal shows scuffs, scrapes and areas of discoloration from oxidation. The right side of the receiver shows light thinning consistent with cycling. The markings are deep. Overall, this rifle rates in about Very Good Plus condition.