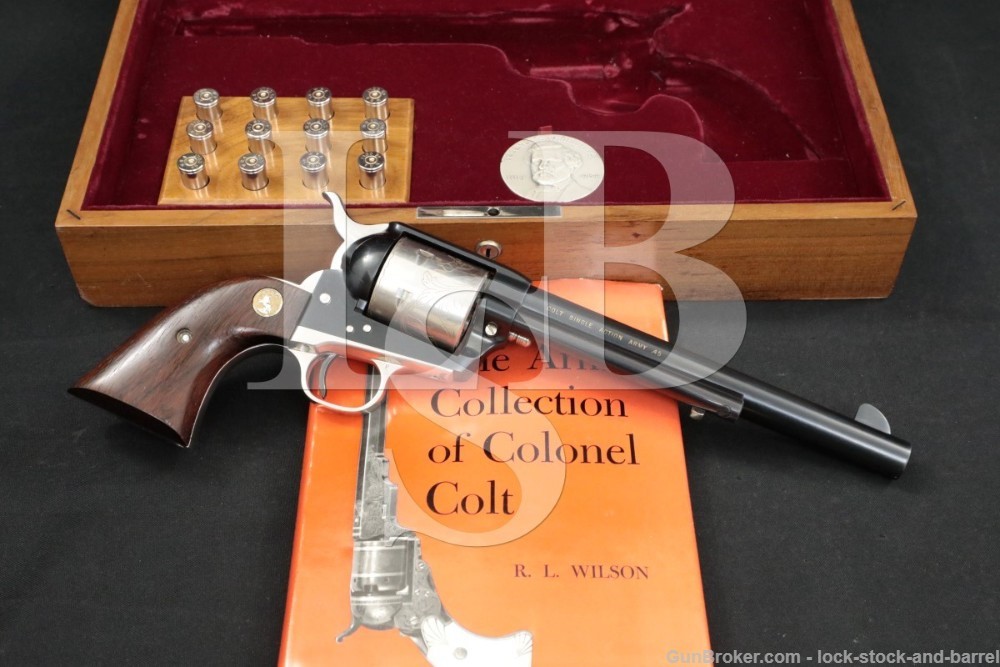 Sights / Optics: The front sight is a quarter round blade fixed to the barrel. The rear sight is a square notch in the top strap.

Stock Configuration & Condition: The grips are walnut with Rampant Colt medallions. The grips have a few scattered light marks, most notable at the bottom on the left panel. There are no chips or cracks. Overall, the grips are in about Fine-Excellent condition.

Type of Finish: The barrel and frame are blue. The cylinder, backstrap and trigger guard are silver plated.

Overall Condition: This revolver retains about 98% of its metal finish. The cylinder has a thin, light turn line. Otherwise, there are only light handling marks. The screw heads are sharp and the markings are clear. Overall, this revolver rates in about Excellent condition.

Mechanics: The action functions correctly. The cylinder lockup is solid. We did not fire this handgun. As with all used firearms, a thorough cleaning may be necessary to meet your maintenance standards.

Box, Paperwork & Accessories: This revolver comes in a walnut display case with a plaque on the lid reading “One of 5000 / COLONEL SAMl COLT / SESQUICENTENNIAL MODELS / 1814-1964”. The interior is lined with burgundy felt with a silver Samuel Colt commemorative coin, a wooden block holding 12 “silver bullets” (deactivated), and a compartment in the lid for “The Arms Collection of Colonel Colt” by R.L. Wilson secured by two black leather straps. The interior of the case and the accessories show minimal wear in Fine-Excellent condition. The exterior of the case has scattered light nicks, scratches and scuffs, in about Very Good overall condition.

Our Assessment: This revolver is a Colt “Colonel Sam Colt Sesquicentennial 1814-1964 Model Single Action Army” .45 Long Colt caliber revolver with its original display case and accessories. It is a beautiful limited edition (5,000 produced) celebrating the 150th birthday of the famous gun maker and celebrating his greatest invention: The Colt Revolver. It is beautiful with a two tone finish: high luster blue on the barrel, frame, hammer and trigger with all of the other parts, including the screws, silver plated. The cylinder is engraved with a leafy pattern along with Colt’s name, a Rampant Colt, a Patterson revolver and the Colt Factory dome. This revolver is in Excellent condition and while it is certainly collectible based off its scarcity, this is also just a very attractive revolver that would be a prize in any collection. Please see our photos and good luck!