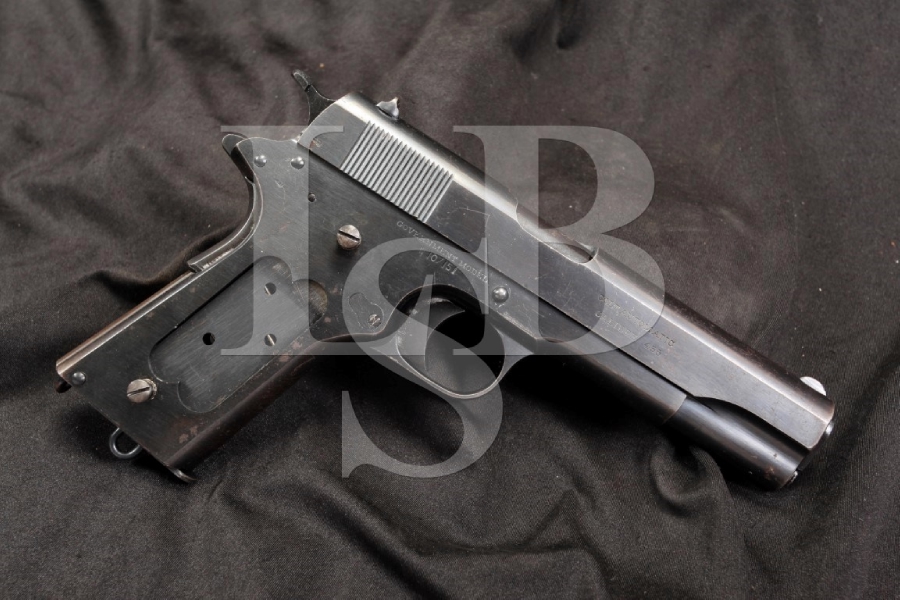 SOLD FOR: $2,015
Make: Colt
Model: 1911
Serial Number: W107151
Year of Manufacture: Shipped April 15, 1919 – 500 guns in Shipment, contract Number: U.S. 6755-MM264
Caliber: .455 Webley
Action Type: Single Action Semi-Automatic Pistol with Removable Magazine
Factory Markings: The left side of the slide is marked “PATENTED APR 20, 1897. SEPT. 9,1902 / DEC 19, 1905. FEB. 14,1911. AUG. 19,1913”, there is a Rampant Colt and then “COLT’S PT. F.A. MFG. CO / HARTFORD, CT. U.S.A.” There is an “HS” on the barrel lug and a “P” on the opposite side. The right side of the slide is marked “COLT AUTOMATIC / CALIBRE 455″. The right side of the frame is marked “GOVERNMENT MODEL / W107151”. There is an “X” and a “10” on the underside of the slide. The top of the frame, under the slide is marked “3” and “E”. The left trigger guard bows have TWO verified proof marks and “98”. The verified proofs look double-struck. The magazine is marked “CAL .455 / ELEY” and with the British Broad Arrow.
British Markings: “R.A.F.” for Royal Air force is marked on the left side of the frame. The left rear of the slide and the left side of the frame are marked with the “Crossed Pennants” which signified government property and were applied at Colt. The left side of the frame also has the British applied “Broad Arrow” again signifying government ownership. The left side of the frame, above the magazine release is marked with “His Majesty’s Crown (mark) / British Inspector G.W.R. Stedman 9mark) / America (mark)”. The right side of the frame is marked “NOT ENGLISH MAKE”. The magazine was also marked with the Broad Arrow.
Barrel Length: 5″
Sights / Optics: The front sight is a fixed blade. The rear sight is a dovetail set notch.
Stock Configuration & Condition: The grips are missing but the screws and escutcheons are present.
Type of Finish: Blue
Finish Originality: Factory Original
Bore Condition: The bore is bright, but a bit fouled and the rifling is sharp. There is no erosion in the bore.
Overall Condition: This handgun retains about 85% of its metal finish. There are many surface scratches and dings to the edges form storage. The majority of the finish is retained, indicating light use. There is very little thinning or wear to the barrel. The back strap has drifted to a light patina, as has some of the barrel metal exposed by the scattered and light scratching. There is only very light surface frosting throughout, much of which should clean. The screw heads are a bit worn. The markings are crisp. Overall, this handgun rates in about Fine condition.
Mechanics: The action functions properly. We did not fire this handgun.
Box, Paperwork & Accessories: One 7-round, two tone magazine with lanyard ring is included. The magazine is in Fine condition and the marked “CAL .455 / ELEY” and with the British Broad Arrow.
Our Assessment: This pistol is from a desirable range of Colt produced 1911s shipped to England for the WWI war efforts. It was after much appeal that the U.S. War Department authorized Colt to produce these guns for the British, who plead that the pistols were “urgently needed by our flying forces” and failure to deliver would result in the forces being “seriously handicapped”. 15,000 Colt 1911s were eventually delivered to the British by 1919, with 45,000 extra magazines. This gun was in the second to last shipment. The “W” prefix indicating .455 Webley seems a bit confusing when the magazine was marked “.455 Eley”. This is proper and the rounds do interchange.

Even the British could respect the quality and superiority of the 1911 over comparable semi-automatics of the day, even their own. These guns were integral in the performance of the RAF and the success of the Allies in WWI. The guns were even retained by the RAF through WWII. If this gun could talk, it would likely tells stories of two wars and the decades in between, as it flew on everything from the bi-planes of the late teen’s to fighters of the early 1940s. This is a very acceptable, if not high condition example of a fine pistol, only needing a new set of grips.