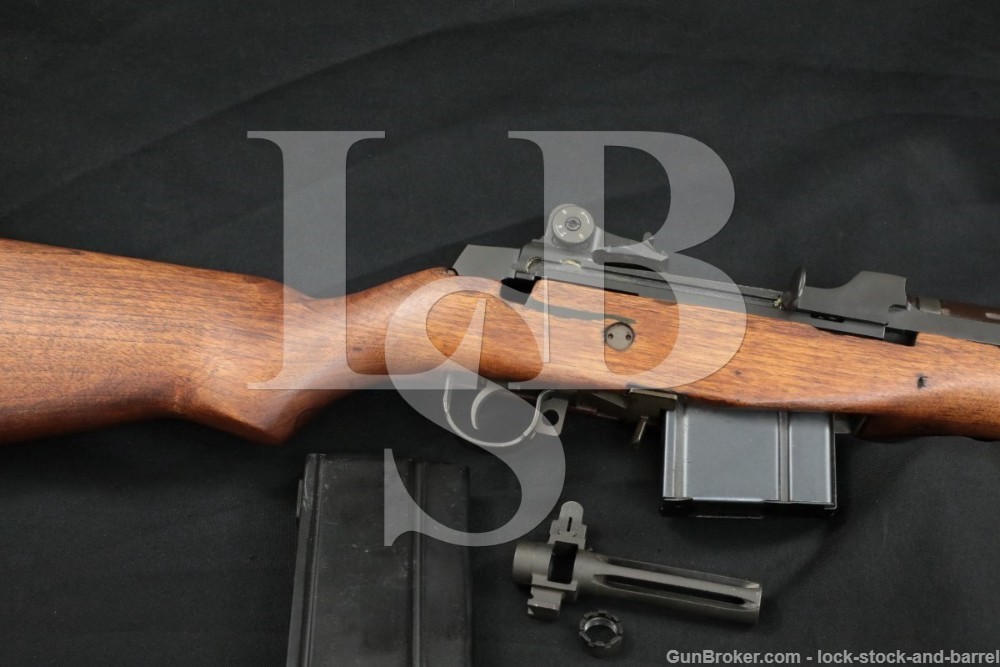 Sights / Optics: The rear sight is a fully-adjustable aperture set between protective ears, the right knob is marked “S” twice between alternating curved arrows and “P B” underneath one of the curved arrows. The left knob is marked with numbers 2-12 by twos and “P B”. There is a mounting point integral to the left of the receiver for a side mounted rail for an optical sight.  Also included is a flash hider/front sight assembly which is not installed on the rifle. The front sight is a blade set between two protective ears.

Stock Configuration & Condition: The wood stock is a factory walnut semi-pistol grip, straight comb stock with the factory sling swivel stud at the bottom of the forend and a fixed sling swivel at the rear. The slimline upper handguard is brown fiberglass. There is a slight split in the wood on the right side of the buttstock that extends from the buttplate. There are other scattered nicks, impacts, and draglines, most of which have been oiled over.  The buttplate is a hinged metal style with a storage compartment underneath. The length of pull measures 13 1/8” from the front of the trigger to the back of the buttplate. The plate shows minor wear. Overall this stock rates in about Good-Very Good condition.

Bore Condition: The bore is mostly bright and the rifling is sharp. There is some scattered light erosion near the muzzle.

Overall Condition: This rifle retains about 94% of its metal finish. The action shows light operational wear. There is finish wear in the location which would ordinarily be covered by the flash-hider/front sight base. There is a bit of thinning on the barrel rear of the gas chamber ring. The gas chamber plug shows light wear. The markings are crisp and clear. Overall, the rifle is in about Fine condition.

Box, Paperwork & Accessories: Included with this rifle is the previously mentioned flash hider/front sight assembly and two magazines, one of which has a capacity of 10 rounds and the other 20 rounds. The 20-round mag is marked “C.M.I.” on the spine. The 10-round magazine show some finish loss from operational wear and has strong feed lips and a strong spring, it rates in about Very Good condition. The 20-round magazine has light scattered small marks and minor oxidation on the follower, it rates in about Fine condition. Please note, no magazine will be included where prohibited by law.