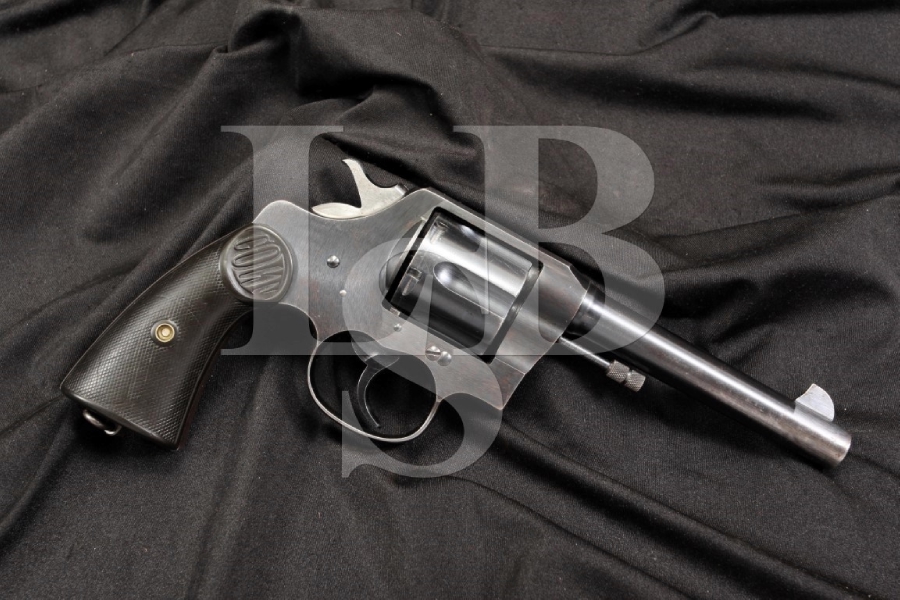 SOLD FOR: $1,350
Make: Colt
Model: New Service Model 1917 Army
Serial Number: 167002
Year of Manufacture: 1918
Caliber: .45 A.C.P. and .45 Auto-Rim (The steps in the cylinder chambers are so deep that a .45 ACP cartridge case mouth doesn’t engage it until the head of the cartridge sits flush with the rear face of the cylinder. We suspect that the firing pin won’t reach the primer. Moon clips should be used with .45 ACP cartridges or else .45 Auto-Rim cartridges used.
Action Type: Single Action/Double Action with Swing Out Cylinder
Markings: The top of the barrel is marked “COLT’S P.T. FA. MFG. CO. HARTFORD, CT. U.S.A. / PAT’D AUG. 5. 1884. JUNE 5 1900 JULY 4 1905.”. The left side of the barrel is marked “COLT D.A. 45”. The underside of the barrel is marked “UNITED STATES PROPERTY” and with an “H” next to the frame. The crane cut is marked “H / 167002 / t”. The crane is marked “167002”. The left rear of the trigger guard is marked “c”. The left side of the frame above the cylinder latch is marked with a circled “GHS” (Gilbert H. Stewart, Colonel, US Army Inspection Stamp), and below the cylinder latch with a “Rampant Colt” logo. The bottom of the grip frame is marked “U.S. / ARMY / MODEL / 1917” and “No. / 16 / 217”. The backstrap is marked “370” and what could be “CC”.
Barrel Length: 5 ½”
Sights / Optics: The front sight is a tall Patridge style blade. The rear sight is a “U” shaped groove in the receiver.
Stock Configuration & Condition: The grips are checkered black hard rubber marked with “COLT” encircled in an oval at the top of each grip. The grips show handling marks. The right grip shows long scratches and a compression mark, with a crack across the bottom. The checkering shows moderate to heavy wear. The grips rate in about Very Good condition.
Type of Finish: Blued
Finish Originality: All Original. There are light sanding marks under the finish on the right side of the frame which we think was a standard wartime finish. All of the markings are sharp and pronounced.
Bore Condition: The bore is bright in spots and gray in others. The rifling is sharp. We can’t see any erosion in the bore, but it isn’t as shiny as other 1917’s we have seen.
Overall Condition: This handgun retains about 75% of its metal finish. There is surface loss at the front edges of the barrel and cylinder, with handling marks on all surfaces. The barrel, top strap, backstrap, front strap, front and bottom edges of the frame, rear edge of the cylinder and edges of the cylinder flutes all show thinning. In addition, the crane pivot shows surface loss with a spot of frosting, the cylinder stop on the left side of the frame shows surface loss, and the right side of the frame shows a few isolated spots of frosting. The front strap also shows a scratch plus a series of short wear marks and there is a compression mark on the bottom of the grip frame. The cylinder shows a drag line with a few small spots of frosting. The knurling on the hammer and ejector rod is sharp, with light wear on the cylinder latch. The screw heads are disfigured. The markings are clear except for those on the bottom of the backstrap which were thinly applied. Overall, this handgun rates in about Very Good to Fine condition.
Mechanics: The action functions correctly. The double action pull is smooth, but a little stiff, and the single action pull is crisp. The cylinder lockup is SOLID. We did not fire this handgun.
Box, Paperwork & Accessories: None
Our Assessment: This revolver was made for the U.S. Army, who wanted a revolver capable of using the same ammunition as the 1911 semi-auto. The .45 ACP rounds were loaded in 3 round half-moon clips. This revolver had stepped chambers in the cylinders, the intention of which was to allow .45 ACP rounds to be fired without the half-moon clips should none be available, although the fired cases couldn’t be ejected. Unfortunately, we feel the chamber steps were made so deep on this revolver that the firing pin won’t hit the primer. This pistol will also fire and eject the .45 Auto Rim, which was a special cartridge developed for Colt and S&W 1917 revolvers so they didn’t need the use of clips. Although this revolver has seen some use, the bore is good and the action is in remarkable condition for a revolver this old. We often don’t see cylinder lockups this good on revolvers that are new in the box, let alone on those nearly 100 years old. This revolver ought to get the attention of the Colt collectors out there, especially those with an interest in WWI firearms.