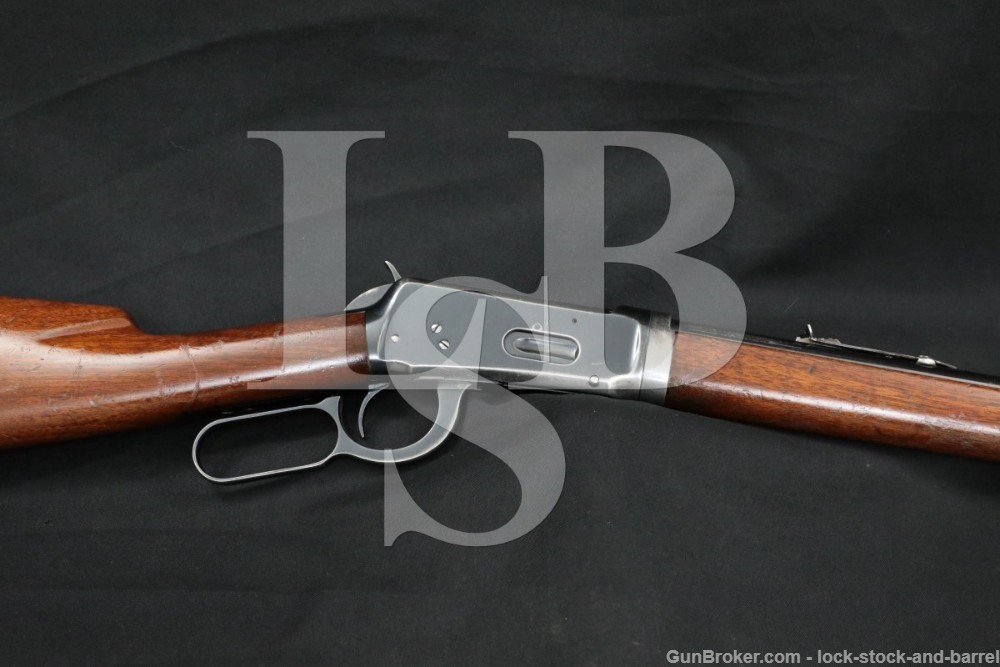 Stock Configuration & Condition: The stocks are two-piece smooth walnut with capped forend, straight grip, straight comb, serrated steel buttplate and a sling swivel in the belly (there is a dimple drilled on the bottom of the barrel in front of the magazine which may be an indexing point for a front swivel, but no front swivel is present). The stocks have several scattered light-moderate nicks, scuffs and scratches with areas of thinning finish, most notable along the comb and at the toe. There is a short crack at the front edge of the wrist on the left, toward the front, another at the rear of the top tang and a few short grain-line cracks around the edge of the buttplate. The LOP measures 13 1/8″ from the front of the trigger to the back of the buttplate. The plate is mostly worn to white with some finish around the bottom mounting screw, scattered nicks and scuffs, and some minor surface erosion. Overall, the stocks are in about Good-plus condition

Finish Originality: The receiver’s finish is original, the barrel assembly has been refinished.

Bore Condition: The bore is bright and the rifling is sharp. There is no erosion in the bore. Our bore gauge gave an M.E. of about 0.9.

Overall Condition: This rifle retains about 70% of its metal finish. The finish is thinning at all edges. The barrel has scattered nicks, scratches and wear, most notable forward of the magazine tube. There is slight green and purple discoloration in the finish around the front and rear sights, and there is wear around the rear sight assembly which indicates that a different sight or possibly an optic mount was installed in the past. The bottom of the barrel has a dimple which was likely an indexing point for a previously installed front sling swivel. The barrel extension is mostly worn to white, with finish remaining on the top. The receiver has handling wear toward the bottom-front and scattered light nicks and scratches. There are infrequent spots of minor surface oxidation. The action shows operational wear. The screw heads range from sharp to tool marked with strong slots. The markings are generally clear, the barrel’s “WP” proof is worn and incomplete. Overall, this rifle is in about Very Good condition as partially refinished.

Mechanics: The action functions correctly. The rifle has a 3 round removable tube magazine, which allows the rifle to be taken down in seconds for maintenance and storage. The lever is smooth, the trigger is crisp. This rifle features a half cock and lever safety. We have not fired this rifle. As with all previously owned firearms, a thorough cleaning may be necessary to meet your maintenance standards.

Our Assessment: By the early 1920’s, Winchester’s Model 94 rifle was losing sales, and in 1924 Winchester introduced an updated version of the Model 94 rifle dubbed the Model 55. The Winchester Model 55 was a rifle with a 24-inch barrel, a half-magazine that held three cartridges and was a takedown rifle which was convenient for storage and transport. It was initially chambered only in .30-30 Win., but .25-35 Win. and .32 Win. Spl. were added in 1926. For the first few years, the Model 55 carried its own set of serial numbers. In 1930, Winchester started producing Models 55 with a solid frame, using Model 94 receivers and serialized in the established Model 94 range. In 1932, with approximately 20,500 guns made, the Model 55 was discontinued to make way for the Winchester Model 64. This rifle was made in 1927, in the earlier years with a takedown action and serialized in the Model 55 serial range. The rifle certainly looks like it has seen its share of use, but it still retains a great bore and strong mechanics. This rifle would be equally suited to rounding out a Winchester lever-rifle collection or to heading back out in the field to drop some deer. Please see our photos and good luck!