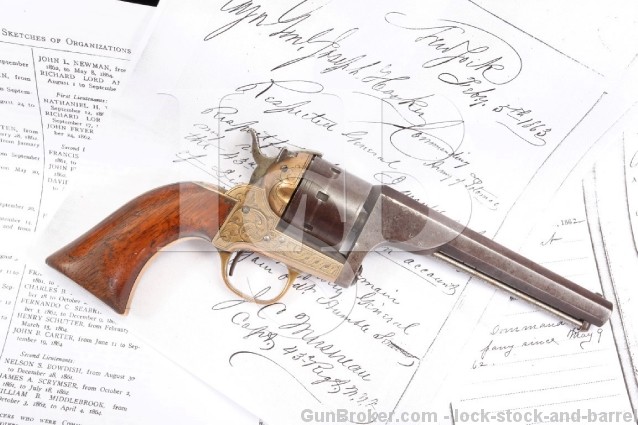 SOLD FOR: $1,975.00
Make: Moore’s Patent Fire Arms Co.
Model: Belt Revolver
Serial Number: 5883
Year of Manufacture: 1861
Caliber: .32 Rimfire
Action Type: Single Action Revolver
Markings: The top of the barrel is marked “MAN’D FOR SMITH & WESSON BY MOORE’S PAT. FIRE ARMS CO.” The cylinder is marked “PATENTED APRIL 3. 1855 & SEPT 18, 1860”. The serial number is on the underside of the barrel assembly and the brass frame is beautifully hand engraved. The back strap is inscribed “Capt. J. C. Mersereau”.
Barrel Length: 5″
Sights / Optics: The front sight is a fixed small brass blade. The rear sight is a notched hammer.
Stock Configuration & Condition: The grips are one piece finished wood. The grips fit the frame very well; though they have shrunk a bit, especially at the backstrap. The bottoms of both panels have worn almost such that they appear intentionally reduced. There are many dings, marks and patches of discoloration, but no cracks. The grips rate in about Very Good overall condition.
Type of Finish: Blue & Plated Brass (the plating is gone)
Finish Originality: Factory Original
Bore Condition: The bore is dark and the rifling is still quite pronounced. There is much erosion in the bore.
Overall Condition: This handgun retains about 10% of its metal finish. The steel parts have turned a light patina, with many scattered dings and marks. There are some tooling marks from a troubled reassembly on the left side at the chamber. There is only very mild erosion and the metal is generally smooth. The brass has discolored a bit, with verdigris on the bustle and the butt. The plating is completely gone from the frame. The brass has a polished appearance, though we believe this to be more from handling than actual polish. The screw heads are worn but serviceable. The markings are light but still clear. Overall, this handgun rates in about Very Good condition.
Mechanics: The action functions correctly, though the trigger return spring needs replacement. The trigger will only catch the hammer when manually pressed forward. The lock up is also a bit loose. We did not fire this handgun.
Box, Paperwork & Accessories: This gun comes with a copy of the Roster of the New York 43rd Infantry Regiment. John C. Mersereau is identified as “age 37; enrolled August 8, 1861, at New York city to serve three years; Mustered in as First Lieutenant, company H, August 30, 1861; promoted Captain, company D, August 13 1862; Discharged, February 23, 1863; commissioned First Lieutenant, November 6, 1861, original; Captain, September 4, 1862, with rank from May 18, 1862, vice H. A. Winslow, discharged”.

There is also a copy of the book “A Compendium of the War of the Rebellion” discussing the 43rd Regiment.

There are also copies of John C. Mersereau’s original Company Muster Rolls (1861-1863) and the original hand written letter of resignation.
Our Assessment: This is a very interesting gun on several accounts. First, Smith & Wesson purchased from Rollin White the patent on bored-through cylinders. This practically gave S&W a monopoly on cartridge firing revolvers, which was reinforced when they won a lawsuit against Moore for infringing this patent. Very few of these revolvers were ever produced, and part of the damages owed to S&W was the barrel markings and the stamping of the patent on the cylinder – which was the exact patent Moore had been found guilty of violating. Few guns display this interesting period of firearms manufacturing as well as the Moore’s gun does, especially the ones marked such as this one.

In addition to the inherent collectability of the gun, it was inscribed with “Capt. J. C. Mersereau” who has been identified as a Captain in the Civil War, a cook… The backstrap inscription is by a different hand than the engraving, though this would be expected as they were not factory presented. The engraving is authentic and the gun has been in a local collection since the early 1960s when the research was compiled. The date on the information request form is 1961.