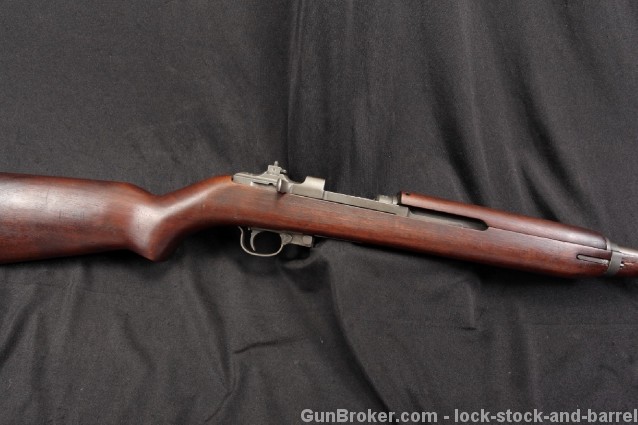 Sights / Optics: The front sight is a Type 1 and the rear sight is a wing protected blade.

Stock Configuration & Condition: The stocks are nicely oiled, Type III military pieces with a Type 1A Barrel Band. There is a clean “GHD / UEF” and Crossed Canons proof mark. “M-U” is stamped on the left side of the sling cut. The wood has naturally darkened, with a few rubs, dings and scratches. Some light sanding can be seen, though the marks remain crisp and this sanding could be from the time of production. There is a hairline crack beginning at the recess cut on the left side of the frame. The LOP measures 13″ from the front of the trigger to the back of the checkered steel plate. The stocks rates in about Fine overall condition.

Bore Condition: The bore is bright and the rifling is sharp. There is no erosion. MW: 1.5

Overall Condition: This rifle retains about 75% of its metal finish. The balance of the finish shows general thinning from handling. The rear of the frame has thinned the most. Otherwise, the edges show wear and there is a light drift to patina. There is some darker discoloration on the left side of the frame and the top of the barrel. The screw heads are sharp. The markings are crisp. Overall, this rifle rates in about Fine condition.

Box, Paperwork & Accessories: None. NO magazine is provided.

Our Assessment: This is a well preserved M1 Carbine from relatively early 1944 and produced by the Underwood Typewrite Company. This gun has a clear cartouche in the stock and natural age throughout. These carbines were favorite war implements for soldiers of the day, lighter to carry than the Garand and Thompson, with a detachable box magazine and a cartridge that Lt. Col. John George stated “would easily penetrate the front and back of steel helmets, as well as the body armor used by Japanese forces of the era.” Audie Murphy found favor in the carbine and this is a great example of the important WWII gun.