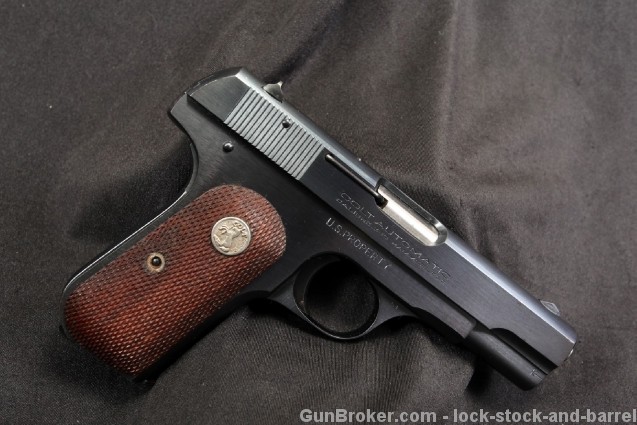 Sights / Optics: The front sight is fixed blade. The rear sight is a dovetail set notch.

Stock Configuration & Condition: The grips are checkered hard wood with Medallions. The checkering is sharp and the panels are literally free of wear. The panels have darkened with age and there is no doubt these are original. The grips rate in about Excellent overall condition.

Bore Condition: The bore is bright and the rifling is sharp. There is NO erosion in the bore.

Overall Condition: This handgun retains about 97% of its metal finish. There is mild thinning from holster wear at the front upper edges of the slide. There is one or two freckles of discoloration and otherwise no wear. We are collectors of pre-1911 Colt automatics and this is literally the best U.S. marked 1908 we have ever seen. There is absolutely no doubt to the finish originality. The screw heads are sharp. The markings are crisp. Overall, this handgun rates in about Excellent condition.

Box, Paperwork & Accessories: A blued magazine, marked “CAL .380 / COLT” is included. This magazine is in Excellent condition with a patch of surface rust on the tip of the base plate. Also included is a factory letter confirming shipment to the United States Government on 11/3/1944 in an order of $4897 for 500 guns.

Our Assessment: This is the best condition U.S. Property marked 1908 we have seen and there is a chance this was a General Officer’s pistol. The factory letter indicates “For: Commanding Officer” and we can assume this gun was issued. In January 1945 (after the shipment of this pistol), after the Navy returned unissued 1908’s to Colt, the Army did the same. Colt reinserted and modified these pistols to correct a feeding / extracting problem, stamping them with an M before they were returned to the Army and Navy. This gun was in the possession of the Army before the unissued guns were returned to the factory and therefore we can assume this gun was issued.

There was once access to issue records at the Rock Island Arsenal, though that has been made unavailable by our government – creating somewhat of a dead end for researching these pistols. We are left with published records on issued guns, though these are admittedly lacking (Brunner & Greely books). Of 34 guns surveyed for the Greely book, from officers issued 1908’s in .380 and retained the serial numbers; only one gun was found to match Colt, Arsenal and Survey Records; 9 matched Colt and Arsenal Records, 6 matched Arsenal and Survey Records and 18 were found only in the Survey. The Greely tables of General Officer 1908’s are thought to be only 35-50% of the total guns issued; many from after WWII. It is believed record keeping at this level was not a priority during WWII.

Long story short, this gun is not identified to be a General Officer’s gun, but very likely was. The gun was issued and was yet retained in near perfect condition. In our experience, issued guns were used – unless they went to Generals. This gun is mint, probably impossible to improve on and is certainly worthy of farther investigative work. Regardless of whether an individual could ever be associated to this pistol – it is still a confirmed 1908 US Property pistol, in the best condition you could ever expect.