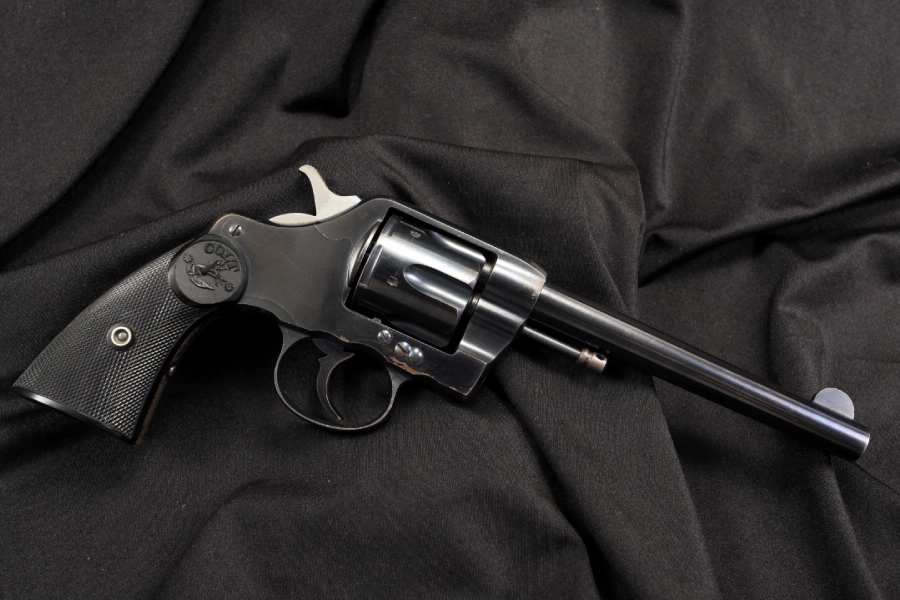 Sights / Optics: The front sight is a fixed blade. The rear sight is a notched top strap.

Stock Configuration & Condition: The grips are original checkered hard rubber with “Colt” and the logo at the tops. There is no cracking, just a bit of wear to the checkering and almost no marking. The grips rate in about Excellent overall condition.

Overall Condition: This handgun retains about 90% of its metal finish. there is scattered finish loss to this fragile finish, with a medium patina in its place. The front and back straps, the front of the top strap and the trigger guard show this. there is little wear or marking elsewhere and this is a very sharp pistol. The screw heads are sharp. The markings are crisp. Overall, this handgun rates in about Excellent condition.

Our Assessment: This is a remarkably sharp pistol, showing absolutely original finish and crisp markings. This is a descendant of the Model 1892, and is frequently referred to as a Colt Model 1892. “The M1892 Colt Army & Navy was the first general issue double-action with a swing-out cylinder revolver used by the U.S. military. In 1892 the gun was adopted by the Army in .38 Long Colt caliber, and the revolver was given the appellation New Army and Navy. Initial experience with the gun caused officials to request some improvements. This would be an ongoing condition, resulting in Models 1892, 1894, 1895, 1896, 1901 and 1903, as well as a Model 1905 Marine Corps variant.” (wiki)