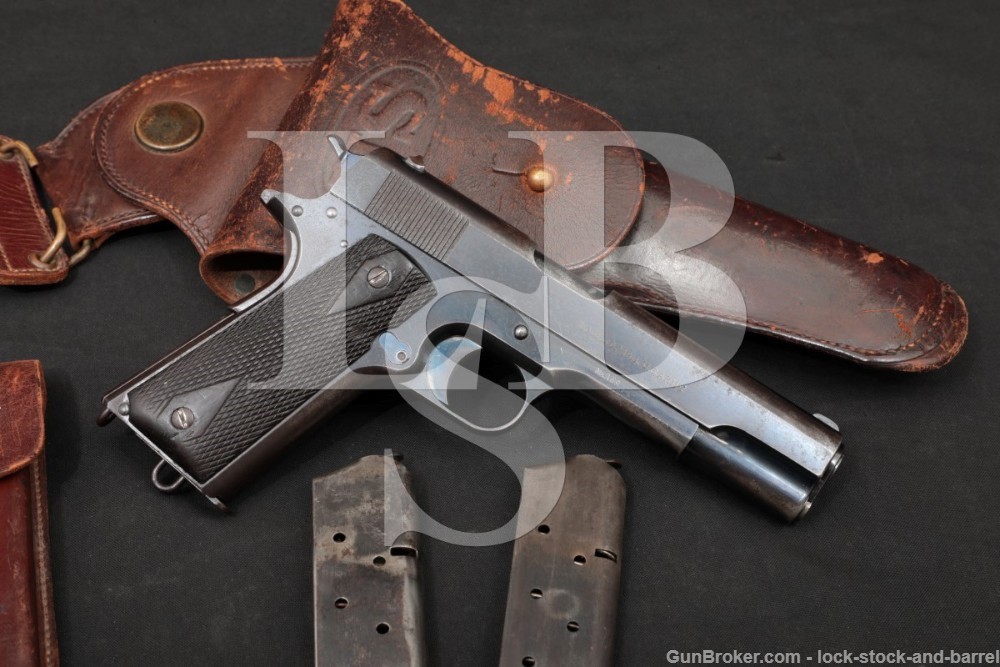 Sights / Optics: The pistol is mounted with a round-top “U”-notched rear sight dovetailed into the slide and a short rounded blade front sight fixed to the slide.

Stock Configuration & Condition: The grips are two-piece checkered walnut with smooth diamonds around the grip screws. The left panel has 15 (+-1) checkers between the points of the diamonds (consistent with Colt production), the right 13 (+-1) and the right panel is darker in color than the left (consistent with Remington UMC production). The grips have scattered compressions and handling wear, more notable on the right panel, and there is wear in the checkering at the bottom edges. Otherwise, the checkering is generally well defined. There are no chips or cracks. Overall, the grips are in about Good-Very Good condition.

Bore Condition: The bore is gray. The rifling is sharp where not interrupted by erosion. There is light erosion and minor pitting scattered through the bore.

Overall Condition: This pistol retains about 60% of its metal finish. The finish is thinning at all edges. some surfaces have gone to a light patina. There is some scattered surface oxidation and there is erosion on the sides of the frame under the grip panels. There are some scattered light nicks and scratches, most notable on the bottom of the mainspring housing at its lanyard loop and under and in front of the slide stop. Much of the fire-blue remains on small parts The action shows operational wear. The screw heads are tool marked with useable slots (see Our Assessment). The markings are clear. Overall, this pistol is in about Very Good condition.

Box, Paperwork & Accessories: This pistol comes with a total of three 7-round magazines, a brown leather flap holster and a brown leather two-magazine belt-pouch. One magazine is a 2nd type with lanyard-loop baseplate, body which extends to the top edge of the baseplate, sharp corners on the top-rear edge and tempered to about 1″ below the mouth. Two magazines are of a later type with lanyard-loop baseplates, bodies which extend to the bottom edge of the baseplate, rounded corners at the top-rear edge and tempering down to the magazine catch slot. The magazines show operational wear, scattered surface oxidation, and some surface erosion, all retaining intact feed lips and strong springs, in about Good-plus condition. The rear of the magazine pouch is marked “Q.M.C. / JEFF. 1921 / H.E.K.” in oval, the front is marked “S” and “H” between the two magazine slots above the stud for the flap. The pouch shows scattered wear and intact stitching, in about Very Good condition. The holster’s flap is marked “US” in oval, the rear of the fob for the brass rotating disk is marked “F.&S.” and the rear of the belt loop is marked “Q.M.C. / JEFF. 1921 / H.E.K.” in oval and “JFR”. The holster shows scattered wear, discoloration, surface loss and intact stitching, in about Good condition.

Our Assessment: The 1911 and 1911-A1 pistols served the military of the United States from 1911 to 1985, through two World Wars and the Korean and Vietnam wars. They gained a reputation as a reliable handgun with plenty of stopping power, and are held in high regard by those who have used them. This is a particularly early example, from just the third shipment of 1911 pistols to Springfield Armory after the pistol was adopted. While there were several changes in the design of the pistol during its service life, this example is a veritable time capsule of early 1911 features. Not only retaining the early-style guide-rod with sharp corners, a rounded bottom edge to the firing pin plate (later changed to a bevel), and short-spur hammer, this pistol has some of the earliest design features such as a mainspring housing pin which is convex on each end, dimpled magazine catch lock, commercial polished blue and fire-blue finish, and all four of the grip screws are the early thin-head type which was replaced due to their propensity for damage to their shallow slots. Perhaps most interesting, current references show that hand-checkering on the slide stop and thumb safety was used until approximately serial 150, replaced thereafter with machine-cut checkering. Serial 173 is equipped with hand-cut checkering on both of these parts, putting it toward the very end of their use, perhaps even the last! Early production 1911s such as this one are sought after by collectors, but a great many of these pistols had various features updated during their service life. This pistol will make a great addition to even the most advanced 1911 collection and is a wonderful glimpse into the earliest production of America’s most iconic sidearm. Please see our photos and good luck!