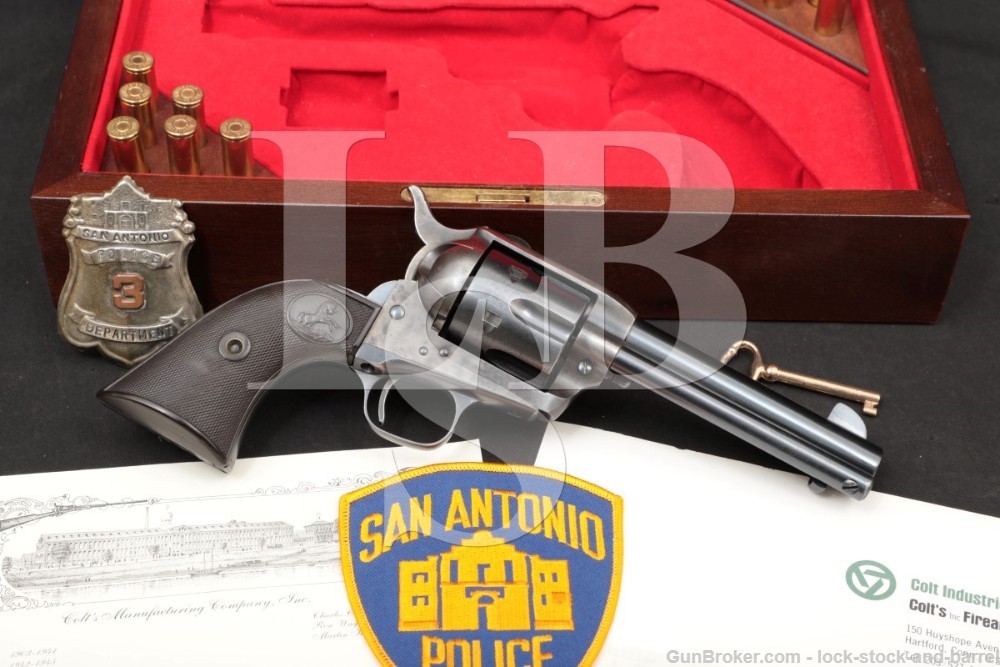 Stock Configuration & Condition: The grips are two-piece checkered hard rubber with rampant colt in oval at the top of each panel. The grips have gone to a brown-ish color. The grips have handling wear in the checkering with a few scattered light nicks and scratches. The exterior has no chips or cracks, the right panel has cracking at the grip screw escutcheon on the interior. Overall, the grips are in about Good-Very Good condition as possibly not original to the gun.

Finish Originality: The barrel has been refinished, the frame, cylinder and grip frame appear original.

Bore Condition: The bore is mostly bright with sharp rifling. There is infrequent minor erosion.

Overall Condition: This revolver retains about 75% of its metal finish. The finish is thinning at all edges. There are some scattered light nicks and scratches. The barrel has some scattered very minor erosion under the finish. The frame’s case color has muted slightly with much of the figuring still visible. The grip frame shows light handling wear. There is infrequent minor surface oxidation. The screw heads range from sharp to tool marked with strong slots. The markings are clear. Overall, this revolver is in about Very Good condition as partially refinished.

Mechanics: The action functions correctly. Lockup produces barely perceptible play on all six chambers. The cylinder has a removable bushing. The trigger is crisp. We did not fire this revolver. As with all used firearms, a thorough cleaning may be necessary to meet your maintenance standards.

Box, Paperwork & Accessories: This revolver comes in a wood display case with red felt-lined french-fit interior and two 6-round cartridge blocks, key for the case, San Antonio Police patch, San Antonio Police Department badge number “3”, and two Colt Historian letters, one from February 1967, the other from May 2007. Both letters identify this revolver by serial number shipping to the City of San Antonio Police Headquarters on October 18, 1927 in its present configuration, in a shipment of 50 guns of the same type, with the “S.A.P.D. No.3” marking factory applied. The display case has light storage wear on the exterior with a few scattered light nicks and scratches, the interior shows little to no wear. The interior is cut for an additional cylinder, but none is present. Overall, the case is in about Fine condition. The patch is in Excellent condition. The design of the badge was not in use by SAPD until 1933 and we were not able to find references to the numbers on the badges being of a different color from the badge body. The badge shows some discoloration and wear consistent with the age of the revolver, possibly having the pin clasp re-brazed, in about Good-plus condition.

Our Assessment: The Colt Single Action Army is perhaps the quintessential old west handgun, produced for more than a century, serving the U.S. Army as its sidearm from 1873 into the first world war and captivating audiences on the silver screen. This example is a late 1st Generation Single Action Army made in 1927, purchased by the San Antonio Police Department. San Antonio was one of the last large cities to equip its officers with the Single Action Army and some were still in service as late as 1949. This example was marked “S.A.P.D. No.3” at the Colt factory and comes with a San Antonio Police Department badge number “3”. The number “3” on the revolver is an SAPD inventory number and not associated with badge numbers, but the badge is still a nice piece to add to the display of the revolver. This revolver is also one of the first batch delivered to SAPD by Colt, with the inventory number marked by Colt, as opposed to being applied by the Department, as they did on later deliveries. The San Antonio Police Department Historical Society was kind enough to provide us with a little more history on this revolver. It was one of 125 which were sold out of inventory in 1949 to Alamo Leather Goods Co., which paid the princely sum of $3,505.00 for the whole batch. Any 1st Generation SAA would make a great addition to a Colt collection, but this revolver’s documented history will improve even an advanced Colt collection, especially if you’re in the Lone Star State. Please see our photos and good luck!