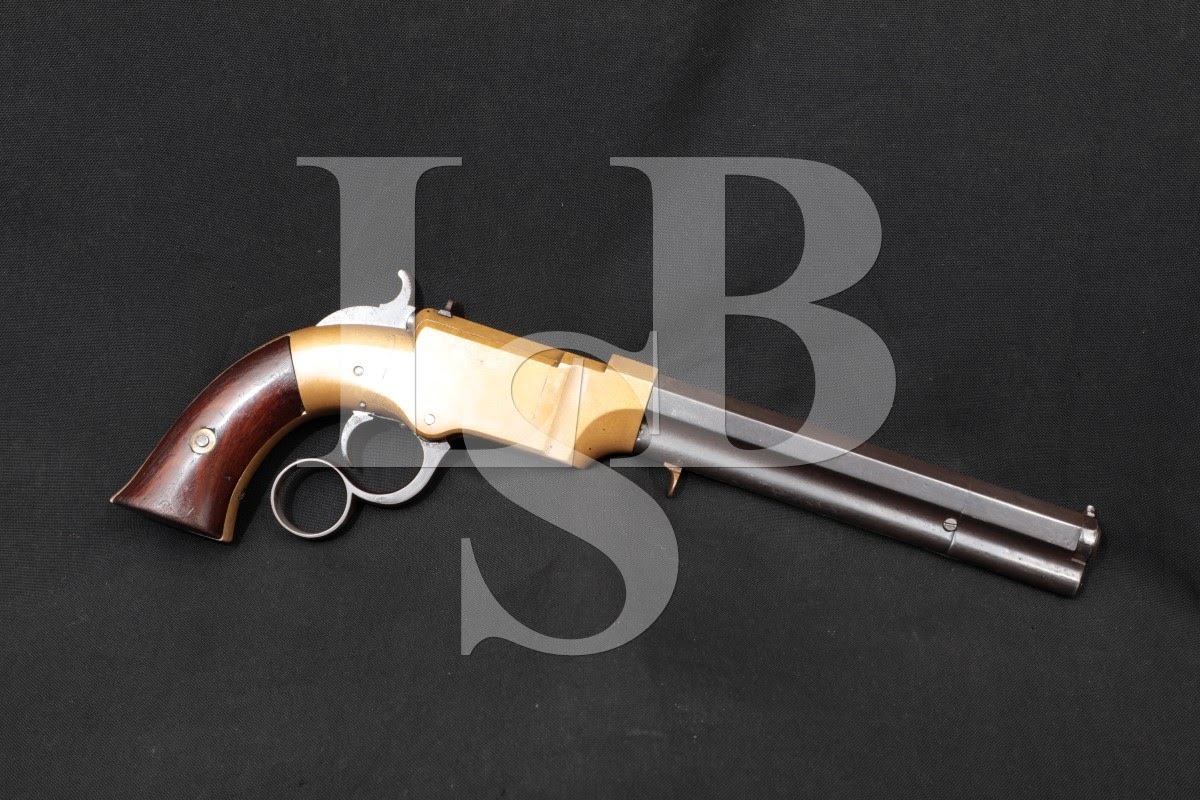 Finish Originality: The barrel and likely the lever have been refinished. The frame has no signs of refinishing.

Bore Condition: The bore is is gray with well defined rifling. There is scattered light erosion in the bore, most in the grooves.

Overall Condition: This pistol retains about 80% of its current metal finish. The barrel assembly has some scattered light surface erosion under the finish. The magazine sleeve has similar erosion under the finish with some scraping on the left side. There are some light nicks along the edges of the magazine follower slot. The frame and sideplates have gone to a mustard patina with the crystalline appearance of old brass. There are some light tool marks at the top edges of the sideplates and around the bottom edges of the lifter cutout. There are a few other scattered light nicks and handling marks. The lever ring has handling wear. The hammer has some surface oxidation and operational wear. The screw heads are tool marked with strong slots. The serial marking on the frame is deep and clear, the right panel’s serial stamping is deeper than on the left. The barrel markings are worn, but legible. Overall, this pistol is in about Very Good condition as Antique.

Mechanics: Please note, this pistol is designed to be operated by first cocking the hammer, then operating the lever. The design is not intended to be operated using only the lever. The follower has some play at its top position, able to drop far enough to interfere with the bolt coming forward unless the pistol is pointed up or otherwise such that the lifter does not fall too far down. Otherwise, the action functions correctly. The hammer spring is strong, the trigger is crisp. As with all used firearms, a thorough cleaning may be necessary to meet your maintenance standards.

Our Assessment: The Volcanic pistols and carbines are an incredibly important piece of American firearms history, being a part of the beginnings of both Smith & Wesson as well as Winchester. The original 1848 “Volition Repeating Rifle” design by Walter Hunt was revolutionary, introducing an early iteration of the lever action repeating mechanism and the tubular magazine still common today. However, Hunt’s design was far from perfect, and only a couple of prototypes were developed. Lewis Jennings patented an improved version of Hunt’s design in 1849, and versions of the Jenning’s patent design were built by Robbins & Lawrence Co. (under the direction of shop foreman Benjamin Tyler Henry) and sold by C. P. Dixon. Horace Smith was also hired by Courtlandt Palmer to improve the Jennings Rifle, patenting the Smith-Jennings in 1851. By 1854, partners Horace Smith and Daniel B. Wesson along with Courtlandt Palmer and B. Tyler Henry, continued to further improve on the operating mechanism, developing the Smith & Wesson Lever pistol, and a new Volcanic cartridge. The new cartridge improved upon the Hunt Rocket Ball with the addition of a primer. Originally using the name “Smith & Wesson Company”, the name was changed to “Volcanic Repeating Arms Company” in 1855, with the addition of new investors, one of which was Oliver Winchester. The Volcanic Repeating Arms Company obtained all rights for the Volcanic designs (both rifle and pistol versions were in production by this time) as well as the ammunition, from the Smith and Wesson Company. Wesson remained as plant manager for 8 months before rejoining Smith to found the “Smith & Wesson Revolver Company” upon obtaining the licensing of the Rollin White rear loading cylinder patent. Winchester forced the insolvency of the Volcanic Arms Company in late 1856, took over ownership and moved the plant to New Haven, Connecticut, where it was reorganized as the New Haven Arms Company in April 1857. B. Tyler Henry was hired as plant superintendent when Robbins & Lawrence suffered financial difficulties and Henry left their employ. While continuing to make the Volcanic rifle and pistol, Henry began to experiment with the new rimfire ammunition, and modified the Volcanic lever action design to use it. The result was the 1860 Henry rifle. By 1866, the company once again reorganized, this time as the Winchester Repeating Arms company, and the name of Winchester became synonymous with lever action rifles. This is a great example of a rarely seen New Haven No. 1 Target Pistol, a 6? .31 Caliber Volcanic Pistol. Only 225 of this variant were produced by New Haven Arms. Though the barrel has an old refinish, the pistol remains in beautiful condition and is a wonderful piece of American history. Please see our photos and good luck!