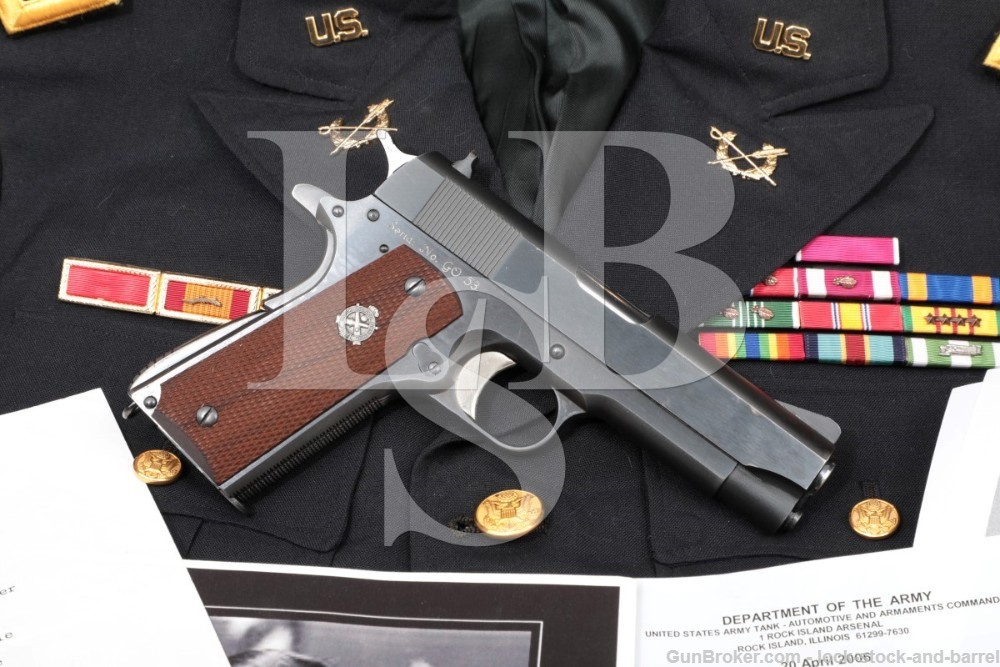 Overall Condition: This pistol retains about 95% of its metal finish. Most finish loss is on the slide flats toward the front, more notable on the left side. There are a few nciks and scratches including a scratch under the slide stop. The action shows minor operational wear. The screw heads are sharp. The markings are clear. Overall, this pistol is in about Fine-plus condition.

Box, Paperwork & Accessories: This pistol comes with a single 7-round magazine, the uniform of Brigadier General Donald W. Hansen, a letter from the Department of the Army stating that this pistol was issued to General Hansen in 1986 and purchased when he retired in 1991 and a brief biography of Brigadier General Ogbourne Duke “O.D.” Butler, Jr., to whom this pistol was originally issued (“U.S. General Officer Pistols: A Collector’s Guide”, Williams & Brunner, p112). The magazine shows minor operational wear, intact feed lips and a strong spring, in about Fine-plus condition. The uniform has a tear on the inside of the lining in the center, nothing that will show if displayed properly, otherwise showing minor wear, in about Fine condition.

Our Assessment: While Colt 1903 and 1908 models were used as General Officer pistols from 1944 until 1972, both models were discontinued by Colt in the 1940s and the Army’s inventory eventually ran out. Rock Island Arsenal tested some commercial models, including the Walther P38 and Smith & Wesson 39, but eventually decided to produce their own GO pistol by customizing 1911A1 model pistols. Gunsmiths at the Arsenal were already very familiar with this sort of work after producing many National Match competition pistols. The result of their work was the M15. First introduced in 1972, the M15 has a 3/4″ shorter slide, a single locking lug for the barrel, National Match sights, National Match trigger, proprietary guide-rod assembly, recoil spring plug and bushing, and the barrel is nickel plated. The frame was modified with National Match style checkering on the frontstrap, six horizontal serrations on the mainspring housing and Herrett’s grips customized with a name plate and Rock Island Arsenal escutcheon. Only 1,004 were produced before the model was discontinued due to cost concerns. This example, GO 53, was first issued to Brigadier General Ogbourne Douglas. General Douglas was a native of Orange, Texas who served during WWII and after the war rose to the rank of Brigadier General in the Army Reserve, commanding the 420th Engineer Brigade. His service started after the attack on Pearl Harbor and Douglas would go on to land as a Captin with the 12th Artillery Regiment, 2nd Infantry Division on D-plus One. He would go on to be in combat for 9 months, which would have included the 2nd and 99th Divisions’ stubborn defense of Elsenborn Ridge, the only sector of the American front line in the Battle of the Bulge which saw no significant advance by the Germans. After his active duty service, Doublas returned to his alma mater Texas A&M where he would rise to Associate Vice-Chancellor for Agriculture and distinguish himself through contributions to animal sciences. It seems that General Douglas elected not to purchase his issued sidearm when he retired, as the pistol was later issued to Brigadier General Donald W. Hansen in 1986. General Hansen served as Commander of the US Army Legal Services Agency and Chief Judge of the U.S. Army Court of Military Review starting in 1981 and retired in 1991 when he purchased this pistol. General Hansen’s uniform jacket is also included with the pistol. This pistol will make a wonderful addition to a collection of military firearms, especially with its rich history. Please see our photos and good luck!