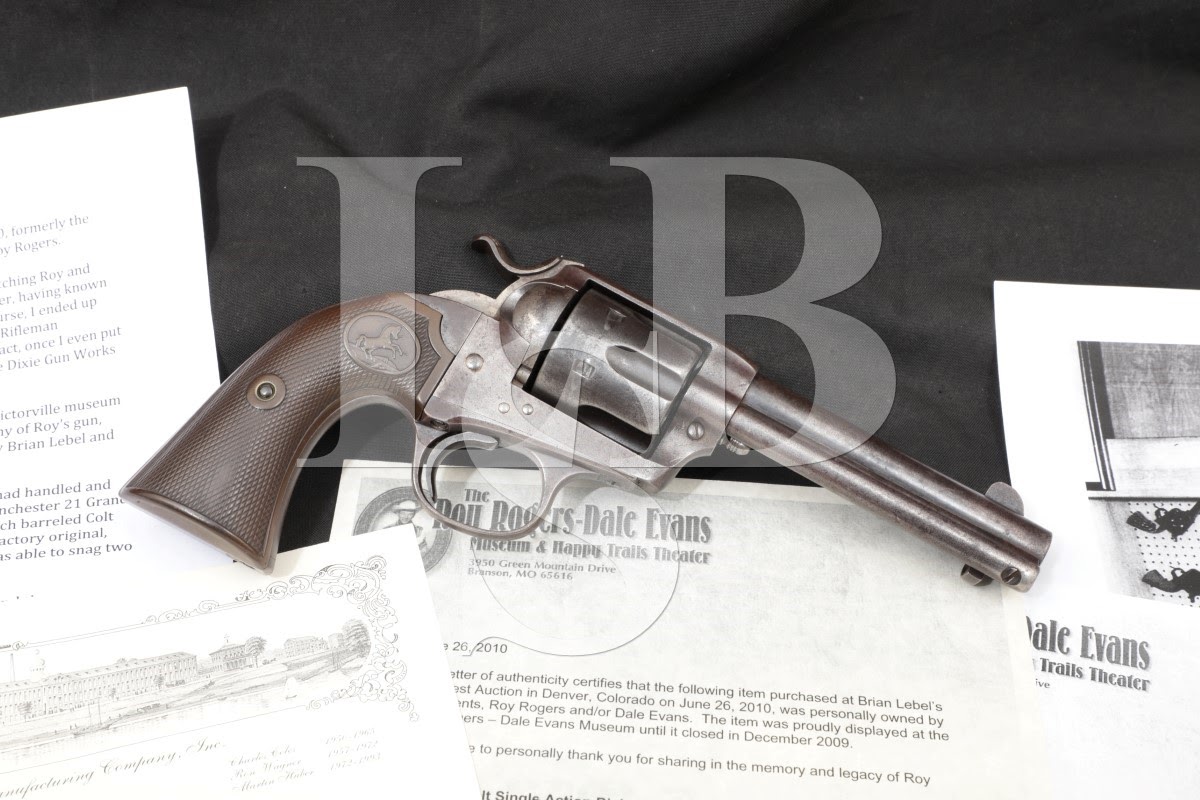 Stock Configuration & Condition: The grips are two piece checkered hard rubber with rampant colts in ovals at their tops. Originally black, the grips have developed a brown coloring. The grips show light-moderate handling wear with a spot of smoothed checkers toward the bottom of the right panel and some scattered light marks. The left panel has cracked into two pieces across the grip screw and since been repaired (the letter of authenticity from the Roy Rogers-Dale Evans museum notes this crack). The checkering is otherwise fairly well defined. There is good detail in the rampant colt. Overall, the grips are in about Good-plus condition as repaired.

Bore Condition: The bore is semi bright with the rifling worn smooth. There is scattered minor pitting and light erosion in the bore.

Overall Condition: This handgun retains about 5% of its metal finish. Remaining finish is mostly in protected areas such as around the top of the trigger guard and the sides of the grip frame under the grips. Most other areas have gone to a light-moderate patina. There is some scattered light erosion, most around the cylinder gap and in the grip areas. There are some scattered nicks, scuffs and scratches with a cluster of tool marks on the bottom of the barrel and ejector rod housing around the cylinder pin head. The action shows operational wear. The screw heads range from sharp to disfigured with useable slots. The markings are generally clear, there are some worn characters in the patent address. Overall, this revolver is in about Good condition.

Mechanics: The cylinder has a removable bushing, but it is seized in the cylinder, we were not able to remove it. Otherwise, the action functions correctly. The cylinder locks up with little play side-to-side and barely perceptible end-shake. The trigger is crisp. We did not fire this handgun. As with all used firearms, a thorough cleaning may be necessary to meet your maintenance standards.

Box, Paperwork & Accessories: This revolver comes with a Colt Historian letter addressed to The Roy Rogers-Dale Evans Museum, a letter of authenticity from the Roy Rogers-Dale Evans Museum, a photocopy of a letter from Roy Rogers Jr. (Dusty) to gun writer Rick Hacker which discusses Dusty’s memories of growing up with the gun, a copy of a photo taken by Mr. Hacker showing the revolver on display at the Museum and a letter from Rick Hacker for the new owner detailing his history with Roy Rogers and Roy Rogers Jr.

Our Assessment: The Colt Bisley was introduced in 1894 as a target pistol. The name Bisley came from the famous firing range in Bisley, England. The Colt Bisley can be distinguished by the longer grip, the wider hammer spur, and the wider trigger. Bisleys were serial-numbered in the range of 156300–331916, in the same sequence as the Single Action Army. This example has quite the history, being originally shipped to Houston, Texas in 1903. Sometime after that it made its way into the personal collection of none other than Roy Rogers, one of America’s favorite singing cowboys. It remained in the collection of the Roy Rogers-Dale Evans Museum until 2010 when it was auctioned and won by noted gun writer Rick Hacker. Due to the friendship between Hacker and Roy “Dusty” Rogers Jr., the revolver is quite well documented, coming with a Colt Historian letter, letter of authenticity from the museum, a personal letter from Dusty to Mr. Hacker as well as a letter from Mr. Hacker to the new winner. This will make a great addition to any Colt or American West collection. Please see our photos and Happy Trails to the lucky winner!