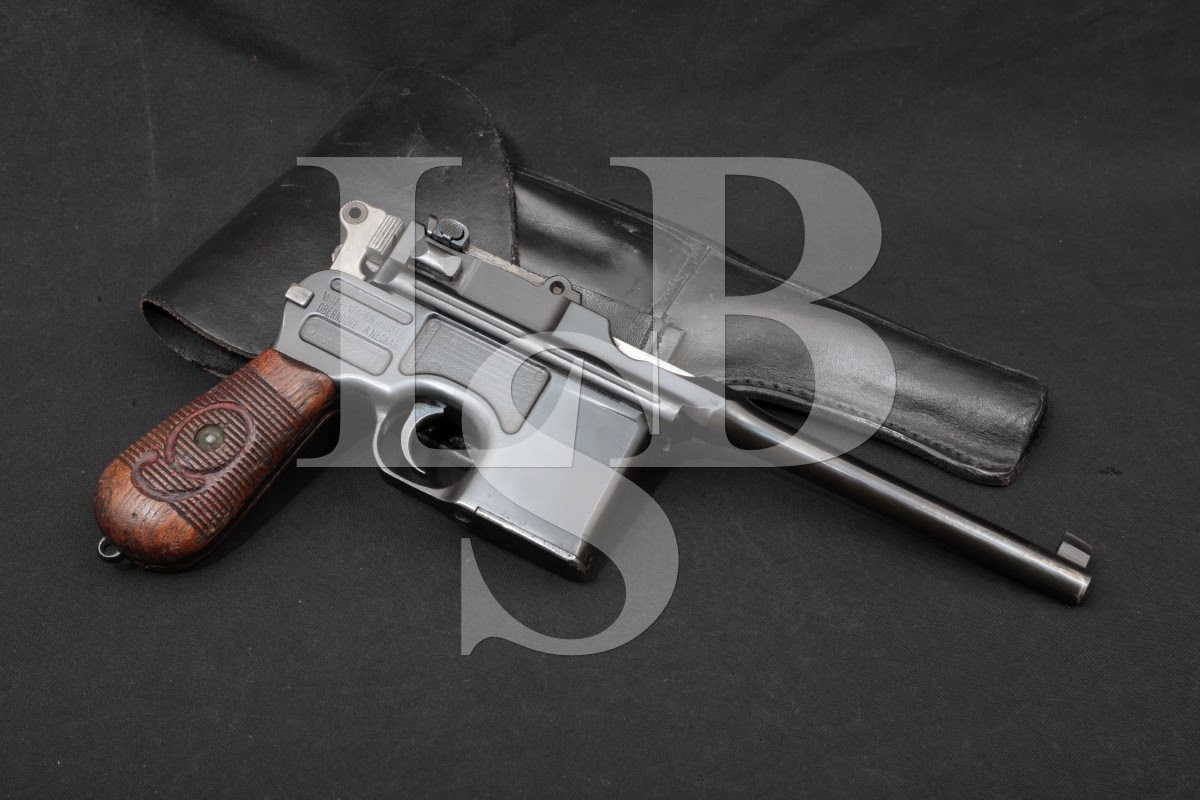 Markings: The top of the barrel at the chamber is marked “WAFFENFABRIK / MAUSER / OBERNDORF A/N”, the left shoulder with “95063”, the left side with a crowned “U” and “1920”, and the right side with a Crowned “Script I” Army acceptance mark. The top rear of the bolt is marked with a crowned “U” and “5063”. The right side of the frame is marked “WAFFENFABRIK MAUSER / OBERNDORF A NECKAR”. The flat on the underside of the barrel has inspection marks. The top of the bolt-stop is marked “5063” (force-matched). The rear faces of the lock frame and frame are marked with “95063”. The rear face of the hammer is marked with an “SN” monogram (Neues Sicherung/New Safety) and “063”. The inside surfaces of the grips are stamped with the number “95063”. The sear disconnector is marked “063” (force-matched). The bolt locking block is marked “5063”. The magazine floorplate is marked “5063” on the inside. The front of the grip frame/magazine well is marked with a Prussian eagle.

Sights / Optics: The pistol is mounted with a “V” notch rear sliding elevator sight with markings from “50-500” that is pinned to the barrel extension. The front sight is a blade fixed to the barrel.

Stock Configuration & Condition: The grips are two-piece walnut panels with 24 grooves and a large “9” burnt into both grips filled with red paint. The grips have some scattered light compressions and scuffs with wear on the bottom around the lanyard ring mounting point (no lanyard ring present). There are no chips or cracks. Overall, the grips are in about Very Good condition.

Finish Originality: Refinished, likely original to arsenal refurbish. Some small parts have been force-matched to the pistol’s serial number.

Overall Condition: This pistol retains about 95% of its current metal finish. There are a few scattered light marks through the finish, most notable on the right of the barrel at the muzzle. The action shows light operational wear. There is scattered minor surface erosion under the finish, with a patch of more notable erosion under the finish at the front edge of the magazine floorplate. The screw head is sharp. The markings range from clear to worn, but legible. Overall, this pistol is in about Very Good-Fine condition as refinished.

Box, Paperwork & Accessories: This pistol comes with a black leather flap-holster. The holster has scattered light wear and the stitching is coming loose at a few points, in about Good-Very Good condition.

Our Assessment: The Broomhandle Model 1896 Mauser is certainly an interesting looking firearm, and the “Red Nine” variants are the most distinctive of any pistol made. During WWI Mauser had two contracts with the military, the first for 7.63mm pistols and the second for 9mm pistols. It soon became apparent that two nearly identical guns with dissimilar ammo was not a good idea. In December 1917, a decision was made to burn a large “9” into the grips and fill them in red paint, with those already issued to be similarly marked in the field. This pistol is a 9mm Military Contract with the left of the barrel extension marked “1920”, an indication that this pistol remained in service in the post-war Wehrmacht, limited to 100,000 men under the terms of the Treaty of Versailles. While the treaty strictly limited arms production, the Germans did refurbish and update those arms they were permitted to have in service. The serial numbers are all matching, though some small parts have been force-matched. In Very Good-Fine condition, this pistol has about 95% of its new metal finish, a great bore and strong mechanics. This is a rare pistol that is sure to be of interest to the serious collectors. Please see our photos and good luck!