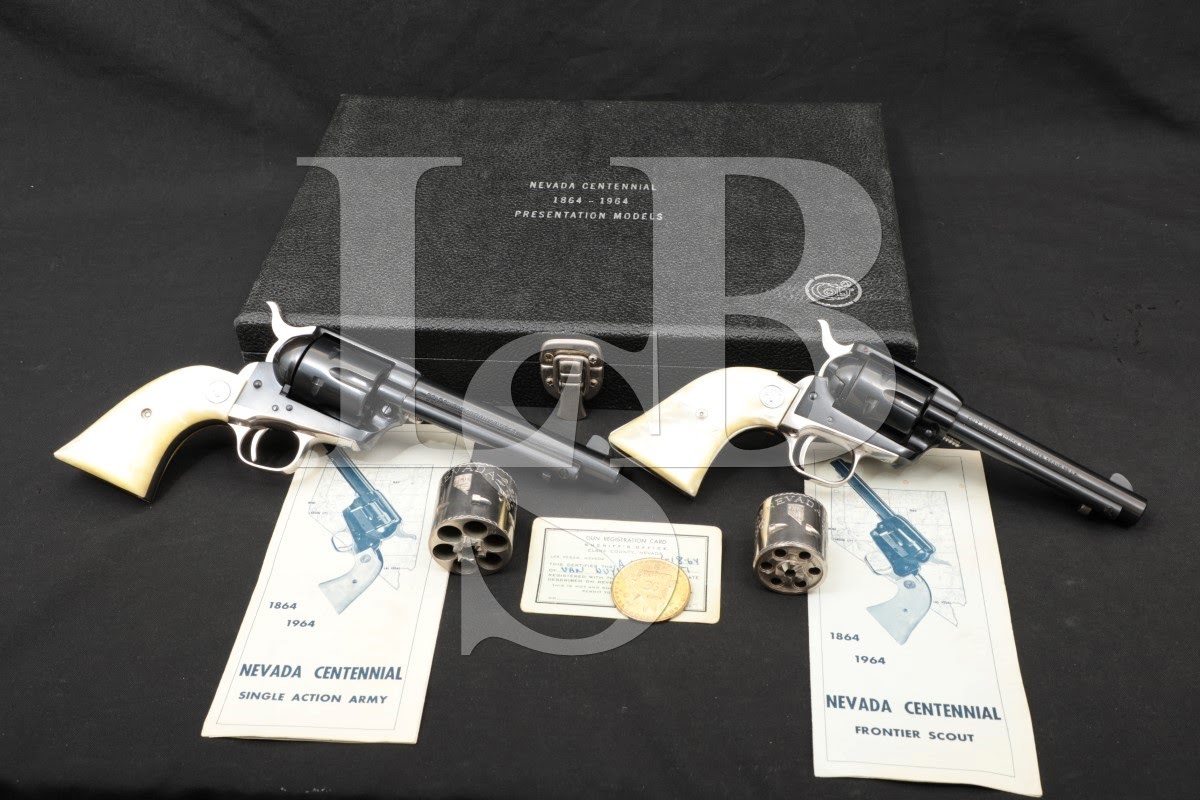 Sights / Optics: The front sights are quarter-round blades fixed to the fronts of the barrels. The rear sights are square notches in the topstraps.

Stock Configuration & Condition: The grips are two-piece faux-pearl panels with silver colored Colt medallions. The grips have no notable wear or damage, only very faint handling marks. There are no chips or cracks. The grips are in Excellent condition.

Bore Condition: The bores are bright, their rifling is sharp. There is no erosion in the bores.

Overall Condition: These revolvers retain 99+% of their metal finish. There is no notable wear or damage, only light handling marks. The screw heads are sharp. The markings are clear. Overall, these revolvers are in Excellent condition.

Mechanics: The actions function correctly. The cylinders lock up tight on all chambers. The triggers are crisp. We did not fire these handguns. As with all used firearms, a thorough cleaning may be necessary to meet your maintenance standards (just kidding, these guns are clean).

Box, Paperwork & Accessories: This pair of pistols comes in a black faux-leather bound presentation case with Colt logo and “NEVADA CENTENNIAL / 1864-1964 / PRESENTATION MODELS” on the lid. The interior of the lid is white satin with blue rampant Colt in circle. The revolvers and their extra cylinders rest in fitted depressions with a blue fabric covering. Also included is a gold Nevada Centennial medallion, Nevada Centennial pamphlets for both the SAA and the Frontier Scout, and a Clark County Sheriff’s Gun Registration Card. We believe that this was shipped with the pistols as it is not signed by the Sheriff and lists the owner as living in Van Nuys, California. The card has been dated 1-18-64 and has the revolvers’ serial numbers listed on the back. The case has minor storage wear, most notable at corners, and there is light wear on the interior from the contents, in about Fine condition.

Our Assessment: Made by Colt in 1964 to celebrate the centennial of Nevada’s statehood, this is a limited edition set Colt Single Action Army and Frontier Scout Presentation Model revolvers with additional engraved cylinders, Nevada Centennial medallion, and presentation case. The case has some minor wear from storage, but the guns are in Excellent condition with just a hint of handling marks in their beautiful finish. From their high-polish metal surfaces to the faux-pearl grips and presentation case, this is a wonderful set of revolvers, sure to turn anyone’s head, especially Nevada residents. A limited edition pair like this would also interest the Colt collector in general, especially the Presentation Models in this high condition. Please see our photos and good luck!