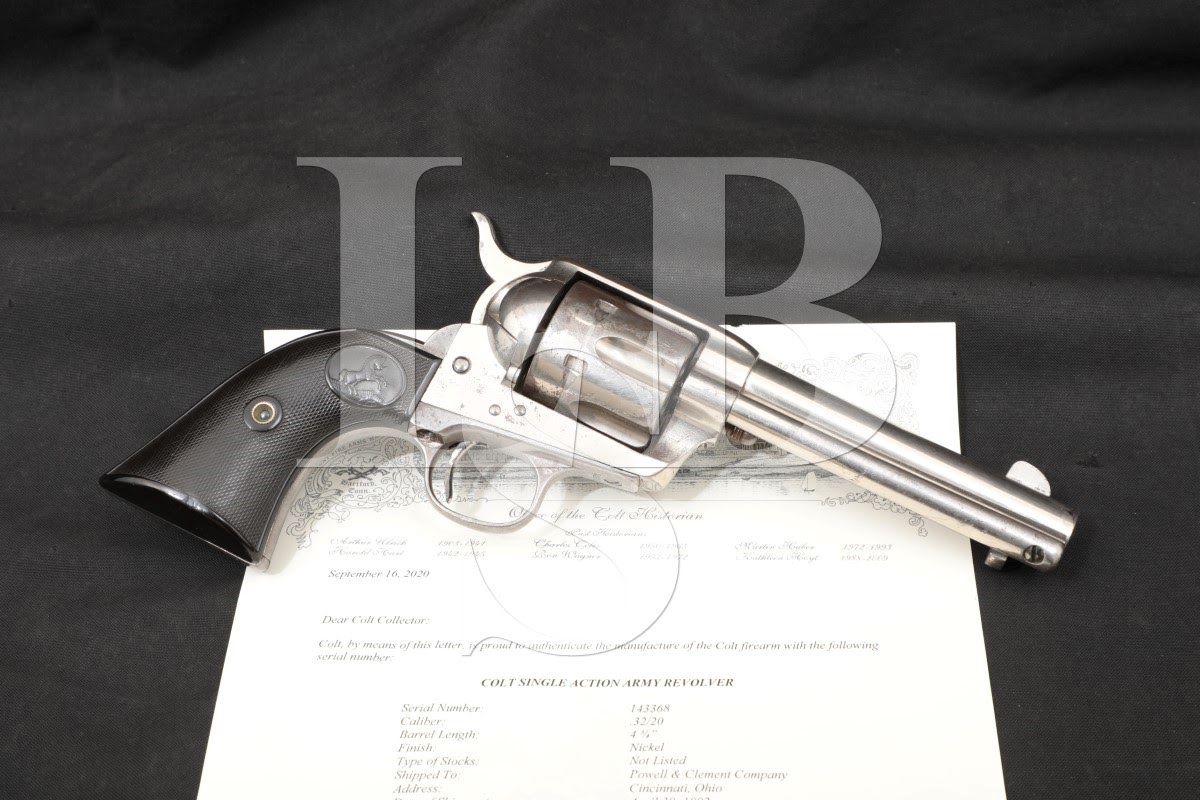 Stock Configuration & Condition: The grips are two-piece checkered black hard rubber with rampant colt in oval at the top of each panel. The grips have handling wear with a few spots of smoothed checkers and scattered light marks. There is a more notable ding on the left panel toward the bottom-rear. The checkering shows wear, but is generally well defined. There is fairly good detail in the rampant colts. There are no chips or cracks. Overall, the grips are in about Very Good condition as Antique and likely not original to the gun.

Bore Condition: The bore is semi-bright. The rifling shows wear, but is well defined. There is scattered light erosion in the bore, mostly along the edges of the rifling.

Overall Condition: This revolver retains about 65% of its metal finish. The finish is thinning at most edges. The barrel has finish loss on the top in front of and behind the front sight and along the left side. The frame has finish loss on the left of the recoil shield, the left of the topstrap and on the outside of the loading gate. The grip frame has mostly lost its finish, with plating remaining on the sides under the grips, protected areas around the trigger guard, and the left flat behind the trigger. There are several scattered nicks, scuffs and scratches. There are punch-marks around the grip indexing pin on either side of the frontstrap. The rear face of the cylinder shows marks between the chambers consistent with the hammer falling between chambers, but the firing pin still has a good point on it. Areas with finish loss generally show discoloration from oxidation, though some are worn white. There is some scattered surface erosion, most notable on the left of the topstrap. The screw heads range from sharp to tool marked with strong slots. The markings are clear. Overall, this revolver is in about Very Good-Fine condition as Antique.

Mechanics: The action functions correctly. Despite the marks on the rear of the cylinder, the timing is good. Lockup produces very little play side-to-side and barely perceptible end-shake on all six chambers. The trigger is crisp. The cylinder has a removable bushing. We did not fire this revolver. As with all used firearms, a thorough cleaning may be necessary to meet your maintenance standards.

Box, Paperwork & Accessories: This revolver comes with a Colt Historian letter which lists this revolver as being shipped April 30, 1892 to the Powell & Clement Company in Cincinnati, Ohio. It shipped as the only revolver of the same type in the shipment. The letter is in Excellent condition.