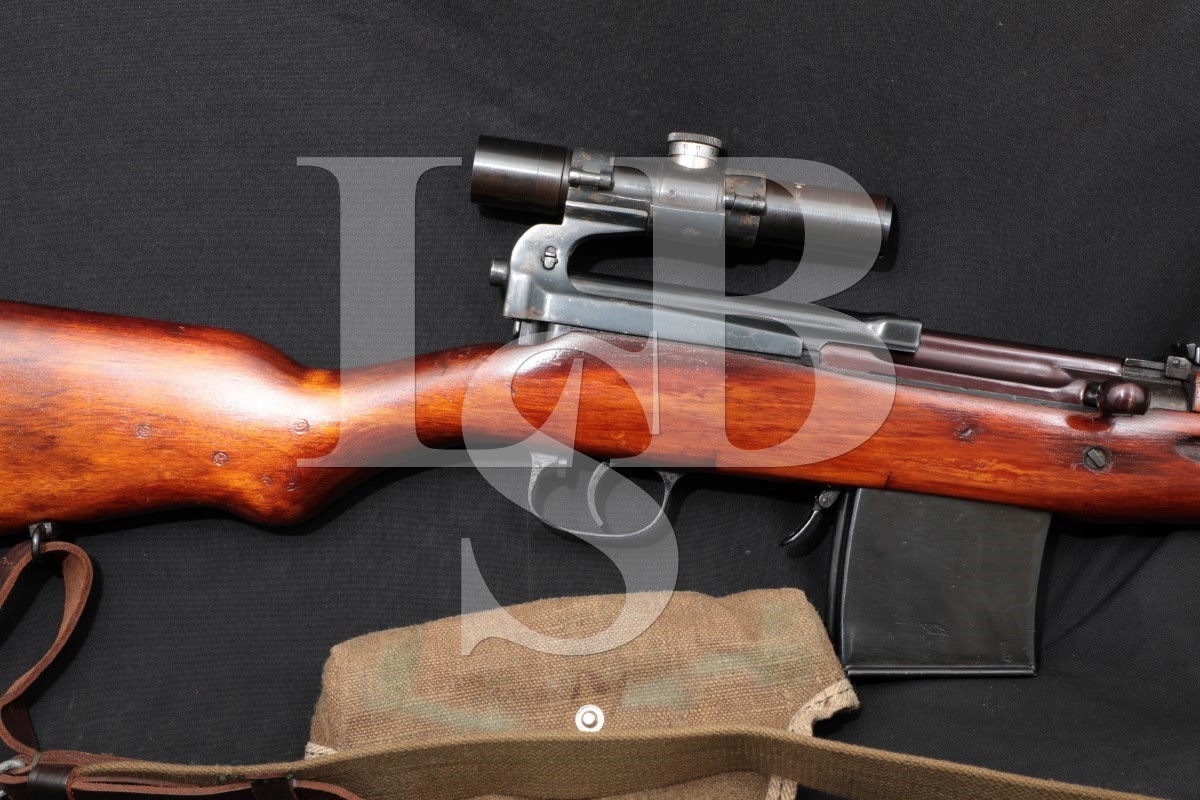 Serial Number: The serial number has a two cyrillic character prefix followed by “2692”. There is an importer-applied serial number on the right-rear of the receiver, but we were not able to remove the scope mount to inspect it. The original serial number is in the correct serial range for a 1942 sniper, but the mount is not original to the gun.

Barrel Length: Approximately 26 ¾ inches to the end of the muzzle brake.

Sights / Optics: The front sight is a hooded post. The rear sight is a “U” notch blade assembly attached to a sliding escalator that is marked from “1 – 15”. The receiver has rails along each side with a Tokarev-style mount installed holding a PU 3.25x scope with post reticle. The rear of the mount is marked with a serial number including prefix which does not match the rifle. The marking appears to be in the proper range for a 1941 sniper, but the first character is either poorly struck or matches known examples of non-original mounts with improper marks. The mount is a proper two-piece construction, but we suspect that it is a reproduction. The mount shows scattered light wear and finish loss consistent with oxidation which has been scrubbed out, in about Very Good condition. The scope is marked “25” in triangle, cyrillic character, star, hammer and sickle, “1941 / No70354”. The scope body has scattered light wear and thinning finish. The glass is still fairly clear, but the lenses could use a good cleaning. Overall, the scope is in about Good-Very Good condition.

Stock Configuration & Condition: The two piece hardwood stock has a pistol grip, finger grooves, ventilated early 8-hole ventilated top handguard, early lower handguard with band under the barrel, barrel band with sling swivel, through bolt, sling swivel in the belly, and a metal buttplate. The buttplate shows scrapes & small scratches. The metal nosecaps show scrapes.  There are patch repairs on the bottom to each side of the magazine release, on the top to each side of the receiver at the front, and on the top-left edge at the front. There are some scattered nicks, scuffs and scratches with tool marking around the through-bolt on each side. The LOP measures 13 ¼ inches from the front of the trigger to the back of the buttplate. The buttplate has a distinct patch in the middle which has been refinished with black paint above and below, showing light wear. There is evidence of sanding at the finger grooves but the serial and inspection markings are still fairly clear. This combined with the repairs indicates arsenal refurbishment. The stock rates in about Very Good overall condition as refurbished.

Overall Condition: This rifle retains about 95% of its metal finish as refinished. There are some scattered light nicks and scratches. There is infrequent minor surface erosion under the finish, most notable on the bottom metal. The action shows light operational wear. There is some scattered discoloration from stubborn dried grease. Many of the markings are deep; some are faded. Overall, this rifle rates in about Very Good-Fine condition as refinished.

Box, Paperwork & Accessories: The rifle comes with one 10 round magazine, a canvas and leather sling, a canvas and leather cover for the scope and the installed scope and mount as described. The magazine has rough finish with a non-matching serial number scribed on the left side, intact feed lips and a strong spring, in about Very Good condition. The sling has minor wear, most in the leather at each end, in about Fine condition as likely a reproduction. The scope cover has light wear with a couple of spots of discoloration, in about Very Good-Fine condition, likely a reproduction.