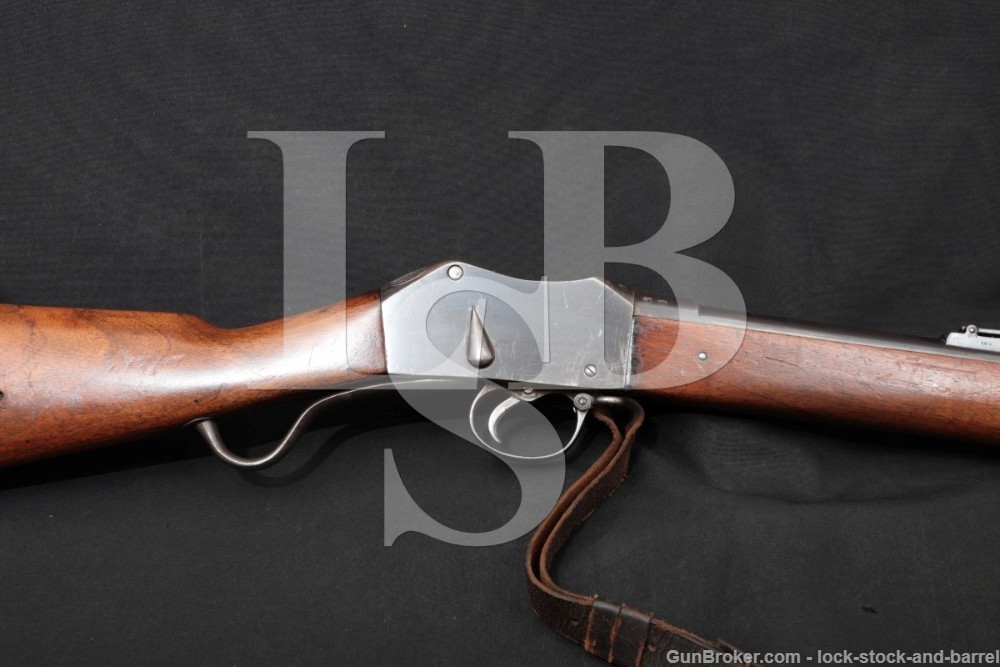 Sights / Optics: The front sight is a blade dovetailed to a rectangular base fixed to the front of the barrel. The rear sight is a folding ladder-style sight. The sight presents a “V”-notch when folded down. When up, the ladder has a slider with a “V”-notch and another “V”-notch at the top of the ladder.

Stock Configuration & Condition: The stocks are two-piece smooth walnut with nosecap, front barrel band with sling swivel, rear barrel band, slot for a cleaning rod (none included), straight grip, straight comb and smooth steel buttplate. The forend is pinned in place at the rear. The stocks have several scattered nicks, dings, scrapes and scratches. There is a knot at the toe on the right. The wood is discolored where it meets the metal. There are no chips or cracks. The LOP measures 14 1/4″ from the front of the trigger to the back of the buttplate. The plate has scattered scratches, scrapes, light surface oxidation and infrequent solid erosion. Overall, the stocks are in about Good-plus condition as refinished Antique.

Bore Condition: The bore is mostly bright with strong Henry style rifling. There is infrequent minor erosion in the bore.

Overall Condition: This rifle retains about 65% of its metal finish. The finish is thinning at all edges. The barrel has generally strong finish with some scattered light nicks and scratches. There is more notable wear and scraping behind the rear sight. The flat on the top of the knox has stubborn adhesive residue. The receiver has scattered scrapes and scratches, more on the left flat than the right, and there is some surface erosion on the left flat. The top of the breech block shows use-wear in the loading groove. The lever and trigger guard have handling wear and discoloration from oxidation. The screw heads range from tool marked with strong slots to lightly disfigured with useable slots. The markings are clear. Overall, this rifle is in about Very Good-Fine condition as Antique.

Mechanics: The action functions correctly. There is a cocking indicator on the right receiver flat. We did not fire this rifle. As with all used firearms, a thorough cleaning may be necessary to meet your maintenance requirements.