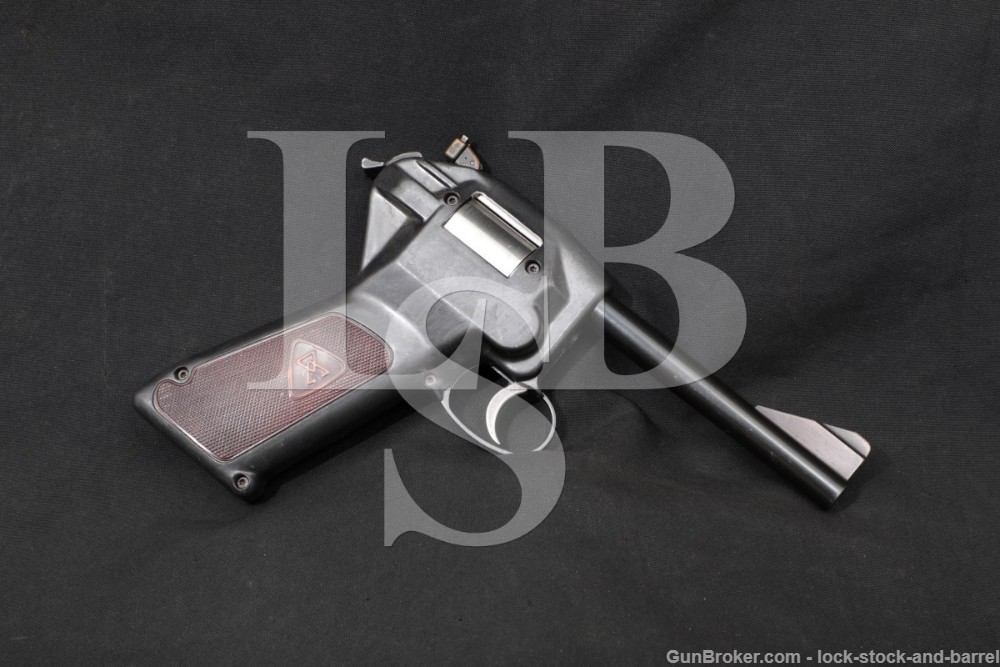 Sights / Optics: The front sight is a tall, ramped, serrated blade fixed to the front of the barrel. The rear sight is a square notch in a base fixed to the top-rear of the receiver, wheel adjustable for windage and elevation.

Stock Configuration & Condition: The grips are two-piece brown-copper colored panels with “DC” monograms in their centers, fixed to the sides of the grip frame. The grips show light surface wear with a few scattered light marks and well-defined checkering. There are no chips or cracks. The grips are in about Very Good-Fine overall condition.

Type of Finish: The barrel is blued, the alloy frame is black.

Bore Condition: The bore is mostly bright and the rifling is sharp. There is infrequent minor erosion in the bore, which may prove to be stubborn fouling after a patient cleaning.

Overall Condition: This handgun retains about 87% of its metal finish. The barrel has some scattered light nicks and scuffs. The loading gate has thinning at edges, scattered finish wear and some light marks. The frame has scattered spots of finish wear, mostly in the grip frame and at edges. The hex-screw heads are undamaged. The hex screw heads are lightly tool marked with strong sockets. The markings are clear with the exception of that milled out by the loading viewport. This handgun appears in Very Good condition but overall is in about Fair-Good condition due to the Mechanics.

Mechanics: When operated in double action, the trigger must be pulled fairly briskly to completely cycle the cylinder. When operated slowly, it tends to under-rotate. Pulling the hammer for single action operation does turn the cylinder, but the hammer does not catch at the rear of travel. The follower doesn’t come up far enough to push a tround into the chamber. This firearm has a three-chamber cylinder with open-sided chambers and a fixed internal magazine in the grip. As trounds are pushed up, they are supposed to feed into the left chamber and are rotated into firing position when the trigger is pulled or when the hammer is cocked. When the cylinder rotates, the tround in the firing position rotates to the ejection port on the right side and falls out the side. This revolver does not have a manual safety. We did not fire this handgun. As with all used firearms, a thorough cleaning may be necessary to meet your maintenance standards.

Our Assessment: Internal magazine revolver sounds like a contradiction, but this revolver is proof that it can be done, with no remark on whether it should be done. The Dardick Corporation was founded by inventor David Dardick who developed this design. It was found that triangular rounds, or trounds, store more efficiently than round cartridges and provide a better seal in this open cylinder design. At a time when police departments still tended to prefer a revolver over a semi-auto, this handgun gave them the operating principle of a revolver with the higher capacity of the semi-automatic, in theory. The Dardick went through many designs, even including a three-barreled salvo model which fired three projectiles at once. The main models were the 11-round capacity Model 1100, the 15-round capacity Model 1500, such as this one, and the 20-round Model 2000. The design was not a commercial success, however, and after being introduced in 1958, the firearms were discontinued in 1962 with sources varying on the number of guns produced but agreeing it was only a few hundred at most. This is a very rare and mechanically interesting handgun, a testament to innovation in design if not to commercial success. This example appears in Very Good condition with about 87% of its metal finish, but has some mechanical issues which will need to be addressed before it can be fired, if you want to shoot it. It would make a great addition to any collection and is sure to be a good conversation piece that will catch the eye with its unorthodox appearance and design. Please see our photos and good luck!