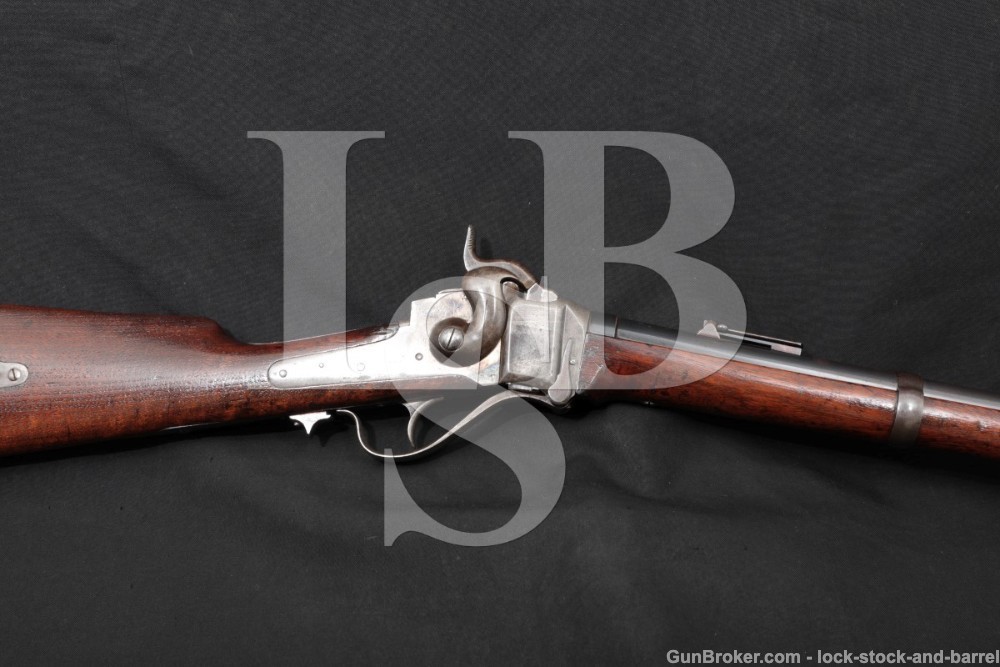 Stock Configuration & Condition: The stocks are two piece smooth walnut with three barrel bands and screw-secured forend with nosecap, straight grip, straight comb, patchbox, case color metal buttplate, sling swivel in the belly and another on the middle barrel band. The stocks show light-moderate wear with discoloration from age and oil, scattered nicks, dings, scratches and scrapes. There is a spot of more notable marring at the front of the wrist to the right of the top tang and a chip-loss at the toe. There is a very short crack at the buttplate above the patchbox. The LOP measures 13 3/4″ from the front of the trigger to the back of the buttplate. The face of the buttplate has mostly worn to white with some nicks and scattered solid erosion, the tang of the plate has similar erosion, but still shows some case color. The patchbox has generally strong remaining case color with some scattered minor erosion.

Bore Condition: The bore is mostly bright with sharp 6-groove rifling. There is some scattered light erosion in the bore and a patch of pitting just in front of the chamber.

Overall Condition: This rifle retains approximately 65% of its current metal finish. The finish is thinning at all edes. The barrel has generally strong finish wih some scattered light scuffing, infrequent minor surface oxidation, a more notable nick on the top behind the middle band and some nicks behind the rear sight. The receiver retains some areas of strong case color, some areas muted or worn to white, scattered light nicks, scuffs and scraping, infrequent minor surface oxidation, and operational wear on the lockplate. There is a crack across the top tang at the front screw. The screw heads range from sharp to disfigured with useable slots. The markings range from clear to worn and incomplete. Overall, this rifle is in about Fine condition as refinished Antique.

Our Assessment: The Sharps New Model rifles and carbines were made in three models: 1859, 1863 and 1865. From Flayderman’s, over 100,000 of the 1859 and 1863 models were purchased by the U.S. Army and Navy during the Civil War. New Model 1863 Military Rifles were produced in 1865 at the tail-end of the war. Serial numbers for this model run from C30,000 to C40,000, with some overlap with other models. After the war, many of the Sharps Carbines were converted from percussion to cartridge-firing for the Army, but comparatively few Rifles were converted, just over 1,000. This rifle is in about Fine overall condition as refinished Antique. It retains a surprisingly strong bore, great mechanics, matching serial number on the barrel and receiver, and quite a bit of its finish remains. The stock even retains its patchbox. The Sharps rifles and carbines represent a great period in the history of American firearms – they participated in the last great war in which percussion rifles were used, and many were converted to metallic cartridges soon after the war. These rifles are highly collected, and this rifle should be no exception. Please see our photos and good luck!