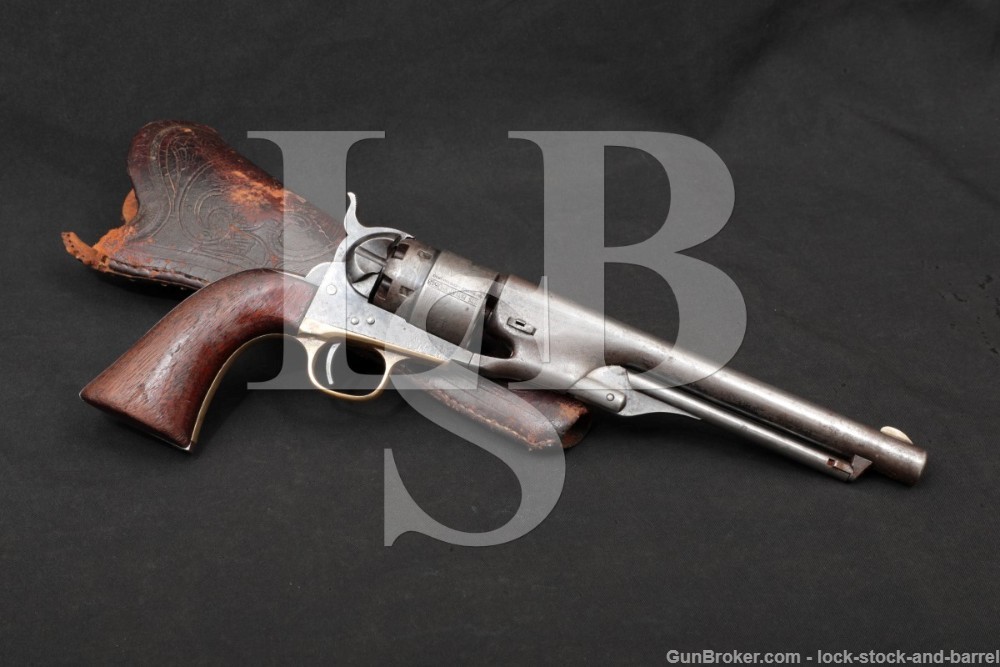 Stock Configuration & Condition: The grip is one piece smooth walnut. The grip has light-moderate handling wear with some scattered nicks, dings, scuffs and scratches. There are areas of thinning finish. There are no chips or cracks. Overall, the grip is in about Very Good condition as Antique.

Bore Condition: The bore is dark and the rifling is worn, but visible. There is moderate-heavy erosion scattered through the bore.

Overall Condition: This revolver retains approximately 20% of its metal finish. There is finish remaining on the bottom of the barrel with some scattered spots of blue elsewhere on the barrel assembly. The frame has some case color remaining under the recoil shield and cylinder. Other surfaces are worn to white, some show a light patina. There is some scattered light erosion as well as nicks, scuffs and scratches. The trigger guard has a mustard patina with some scattered darker discoloration. The action has operational wear. There is erosion around all of the nipples. The strike-face of the hammer appears to have been built up with weld. The screw heads range from sharp to lightly disfigured with useable slots. The markings are generally clear, the cylinder naval scene retains about 80% of the design. Overall, this revolver is in about Very Good condition as Antique.

Mechanics: The action functions correctly. The barrel has no play to the frame. The cylinder locks up with very little play on each chamber. The trigger is crisp. We did not fire this handgun. As with all used firearms, a thorough cleaning may be necessary to meet your maintenance requirements.

Box, Paperwork & Accessories: This revolver comes with a tooled brown leather slim-jim style holster. The belt loop is marked “EL. GALLATIN & CO / MAKERS”, this marking is worn and incomplete. The holster has some losses at edges, broken stitching at the trigger guard cover. There is scattered wear, and discoloration. Overall, the holster is in about Very Good condition given its age (1862-1865). More information about Mr. Gallatin can be found here: https://www.vintagegunleather.com/company-marks/gallatin_history.html

Our Assessment: The Colt Model 1860 Army revolver was easily the most popular army revolver on both sides of the conflict during the American Civil War. Approximately 127,000 of these revolvers were purchased for use by Union forces and several of the Confederate states had obtained a few thousand before the start of the hostilities as well. The Model 1860 Army was the successor to the Third Model Dragoon and ranks third in total number produced of the various models of percussion Colt handguns. This revolver was made in 1863 and appears to be a commercial model, lacking any martial markings. All numbered parts are matching except for the wedge. The revolver is in about Very Good condition as Antique with a bore which is not too bad for 150 years of black powder use, most markings clear, and strong mechanics. It also comes with a contemporary holster, whose maker has his own interesting story which includes being robbed by Confederate soldiers at gunpoint. This revolver is a decent example of the 1860 and was made during an important period of American history as the nation roiled from the Civil War. Please see our pictures and good luck!